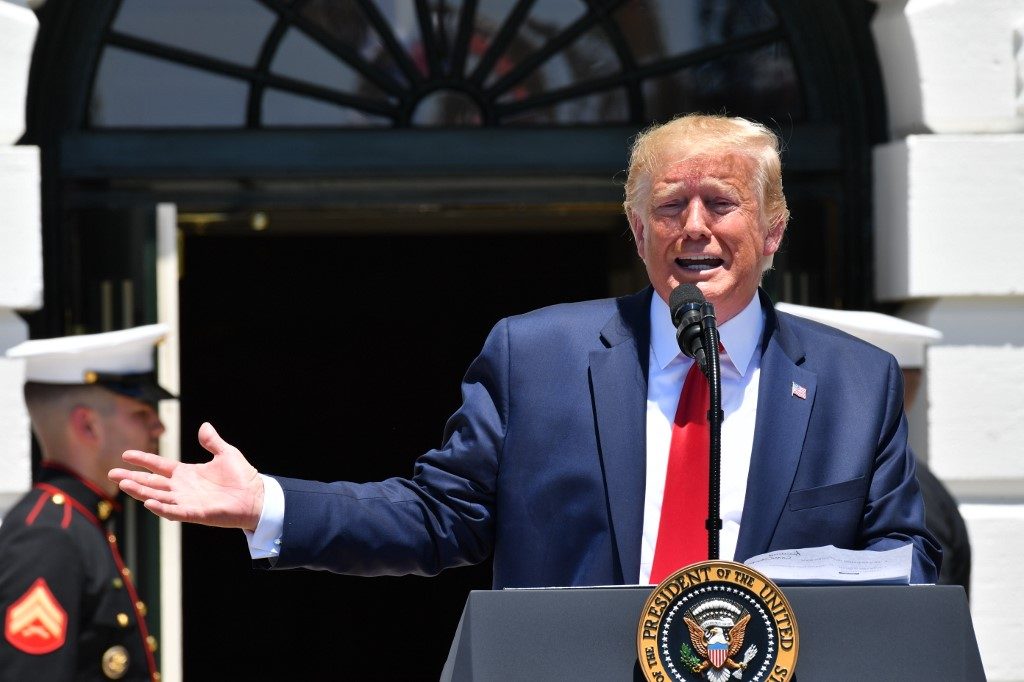 Facebook Twitter Copy URL
Copied
Trump tells around two dozen Latin American leaders on the sidelines of the UN General Assembly that socialism had 'destroyed' Venezuela, but that the country's people 'will be free'

UNITED NATIONS – US President Donald Trump said Wednesday, September 25, that Venezuela was suffering “a tragedy of historic proportions” as he pledged to do everything in his power to isolate Nicolas Maduro’s regime.

Trump told around two dozen Latin American leaders on the sidelines of the UN General Assembly that socialism had “destroyed” oil-rich Venezuela, but that the country’s people “will be free.”

“Today Venezuelans are starving and they’re dying from lack of medicine. We will stand with the Venezuelan people every single day,” he said, adding that socialism had “destroyed” the South American country.

Trump simultaneously suspended senior members of the Maduro government from entry into the United States via a proclamation posted on the White House website.

The document said the president was banning those “who formulate, implement, or benefit from policies or actions that undermine or injure Venezuela’s democratic institutions or impede the restoration of constitutional government to Venezuela.”

Venezuela is gripped by an economic and political crisis, with both Maduro and self-declared acting president Juan Guaido claiming to be the country’s leader.

The United States, along with more than 50 other countries, recognizes Guaido as leader of Venezuela which is in free fall, hit by low oil prices, mismanagement and the impact of US sanctions.

Most of the international community did not recognize the results of controversial polls that handed Maduro a second term last year.

Trump added at the meeting in a hotel in New York that the United States was “doing everything we can to isolate Maduro and his cronies.”

“Venezuela’s rebuilding can begin the moment a peaceful transition occurs,” he told counterparts, including the presidents of Argentina, Chile and Ecuador.

Venezuela suffers from hyper-inflation and shortages of basic goods from food to medicine, a crisis that has forced some 3.6 million people to flee since 2016.  – Rappler.com