Hong Kongers start days of rallies ahead of China’s birthday

Sep 28, 2019 5:35 PM PHT
Agence France-Presse
Facebook Twitter Copy URL
Copied
Democracy protesters in semi-autonomous Hong Kong are determined to take the shine off the festivities to mark 70 years since the founding of the People's Republic of China 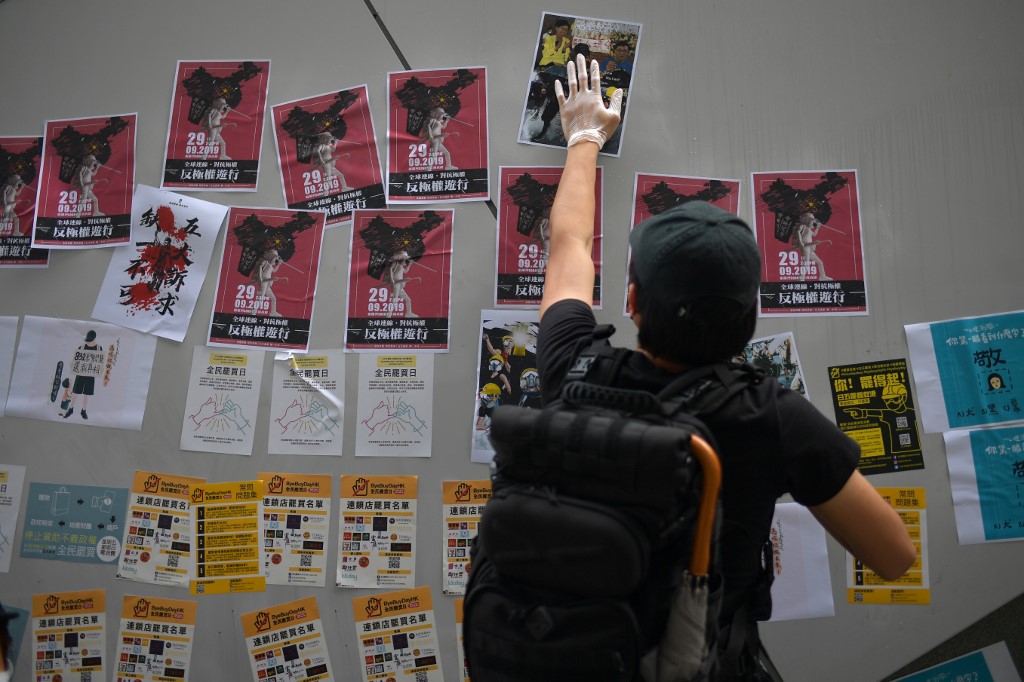 HONG KONG, China – Thousands of Hong Kong pro-democracy activists on Friday night, Septembr 27, kicked off what is expected to be an intense period of protests, aiming to cast a shadow over communist China’s momentous anniversary celebrations.

Beijing is preparing a huge military parade on Tuesday, October 1, to mark 70 years since the founding of the People’s Republic of China, revelling in its transformation into a global superpower.

But democracy protesters in semi-autonomous Hong Kong are determined to take the shine off the festivities as they press on with nearly 4 months of huge, sometimes violent rallies.

Four days of action are planned in the run-up to Tuesday with clashes almost certain after police denied permission for a march on the anniversary itself citing safety concerns.

Previous bans have been widely ignored and soon descended into violence with hardcore activists throwing rocks and Molotov cocktails, and police responding with tear gas, rubber bullets and water cannon.

On Friday evening, thousands packed into a square on the main island to hear from arrested activists who said they were assaulted and denied access to lawyers and doctors in a detention center near the Chinese border earlier this summer.

Hong Kong’s protests were ignited by a now-scrapped plan to allow extraditions to the authoritarian mainland.

But they have snowballed into a wider movement calling for democratic rights and police accountability after Beijing and the city’s leader Carrie Lam took a hard line.

On Saturday, thousands are planning to gather in a park next to the city’s parliament for an evening rally marking the fifth anniversary of the “Umbrella Movement”, a failed 79-day occupation that called for universal suffrage.

Alleged mistreatment of detainees at the San Uk Ling detention center on August 11 has become the latest incident to fan already boiling public anger towards the city’s force and local government.

Police brought 54 people arrested that night during protests to the remote center, which is usually only used to process illegal immigrants.

A woman in her twenties who asked to use the pseudonym Anna was among those arrested and said she saw multiple people left for hours with badly bleeding wounds.

“The police ignored their requests to visit the hospital and insisted they stay in the center for processing documents, telling them to hold napkins to cover the wounds by themselves,” she told AFP.

Kenneth Lam, a local lawyer who represented 4 people held at the facility, said it took him nearly 12 hours to access his clients.

When he reached them, he said their statements had already been taken despite their requests for a lawyer.

“It was highly unsatisfactory and infringed on the legal rights of the arrested persons,” he told AFP.

They said the facility was used because of the large number of arrests that had been made that night.

But anger has mounted over the issue in recent days and on Thursday, September 26, Carrie Lam announced the center would no longer be used to process protesters who are arrested.

Police spokesman Superintendent John Tse told reporters the decision to stop using San Uk Ling “has nothing to do with the groundless claims alleging the police of misconduct like excessive use of force and sexual harassment”.

He called on detainees alleging abuse to come forward and make complaints through the city’s police watchdog.

Rallies are also expected on Sunday, September 29, to mark a Global Anti-Totalitarianism Day, with solidarity events planned around the world in cities such as Taipei, Paris, Berlin, New York, London and Vancouver.

Students are planning a class boycott on Monday, September 30,  while online messaging boards used to organize the largely leaderless protests have filled with calls to disrupt celebrations of China’s anniversary on Tuesday, October 1. – Rappler.com