Oct 1, 2019 9:05 AM PHT
Agence France-Presse
Facebook Twitter Copy URL
Copied
'Unity is iron and steel. Unity is a source of strength,' says Chinese President Xi Jinping in a speech on Monday, the eve of celebrations 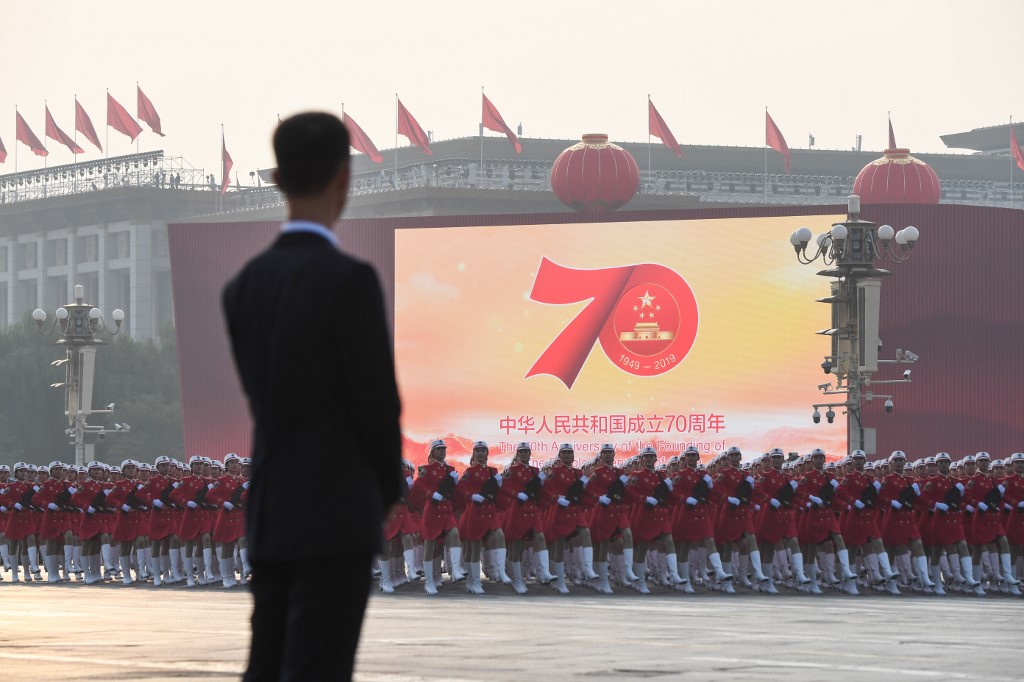 BEIJING, China – China celebrates 70 years of Communist Party supremacy Tuesday, October 1, with a parade of tanks, missiles and troops, a muscular display of its rising superpower status even as it faces an unprecedented challenge to its authority in seething Hong Kong.

Authorities in Beijing have closed roads, banned the flying of kites, and shut some bars as they tightened security for an event celebrating China’s journey from a country broken by war and poverty to being the world’s second-largest economy.

The massive military parade will roll across Tiananmen Square under the gaze of President Xi Jinping, the country’s most powerful leader since Mao Zedong, who founded the People’s Republic of China on October 1, 1949.

New weapons – including a hypersonic drone and an intercontinental ballistic missile that can cover the United States – are expected to make their public debut, according to Paris-based analysts.

“Unity is iron and steel. Unity is a source of strength,” Xi said in a speech on Monday evening.

But behind the projection of strength at the tightly-choreographed event, a clutch of challenges are testing Xi’s ability to maintain economic and political stability at home and abroad.

“The party hopes that this occasion will add to its legitimacy and rally support at a time of internal and external challenges,” Adam Ni, China researcher at Macquarie University in Sydney, told AFP.

US trade war negotiations have dragged on, and African swine fever has raced through the country’s pig supply, sending pork prices soaring.

But the major headache is Hong Kong, where pro-democracy protesters plan to grab the spotlight from Beijing on Tuesday with their own rally against what they see as the erosion of their special freedoms.

The semi-autonomous city has been embroiled for months in the worst unrest since Britain returned the financial hub to China in 1997, with police and hardcore protesters trading tear gas for petrol bombs.

In an apparent olive branch, Xi vowed Monday to continue to “fully and faithfully implement” the one country, two systems policy under which Hong Kong residents enjoy freedoms unseen on the mainland.

Communist Party grandees will watch as 15,000 soldiers march across Tiananmen, 580 pieces of military equipment are shown off and 160 aircraft roar overhead.

The Communist Party has repeatedly defied the odds to remain in power for 7 decades.

Under Mao, tens of millions of people died during the disastrous Great Leap Forward, and the country was plunged into violent chaos during the decade-long Cultural Revolution.

After Mao died in 1976, the party launched the reform and opening-up policy under paramount leader Deng Xiaoping, starting decades of breakneck growth and development.

But the Communist Party (CCP) retained a stranglehold on power, sending troops to end the biggest challenge to its rule in 1989 when pro-democracy protesters occupied Tiananmen Square.

When Xi takes the podium to address the nation at the parade on Tuesday, he is likely to invoke his “Chinese dream”, the “rejuvenation” of a nation that is seeking what it sees as a return to former glory.

The Party wants to show on Tuesday “that under the leadership of the CCP, China is making strides toward becoming a rich and powerful country”, said Bonnie Glaser, senior adviser for Asia at the Center for Strategic and International Studies in Washington.

The Chinese leader has made clear that he believes only the Communist Party can make the country realize its dream – with him at the helm. – Rappler.com