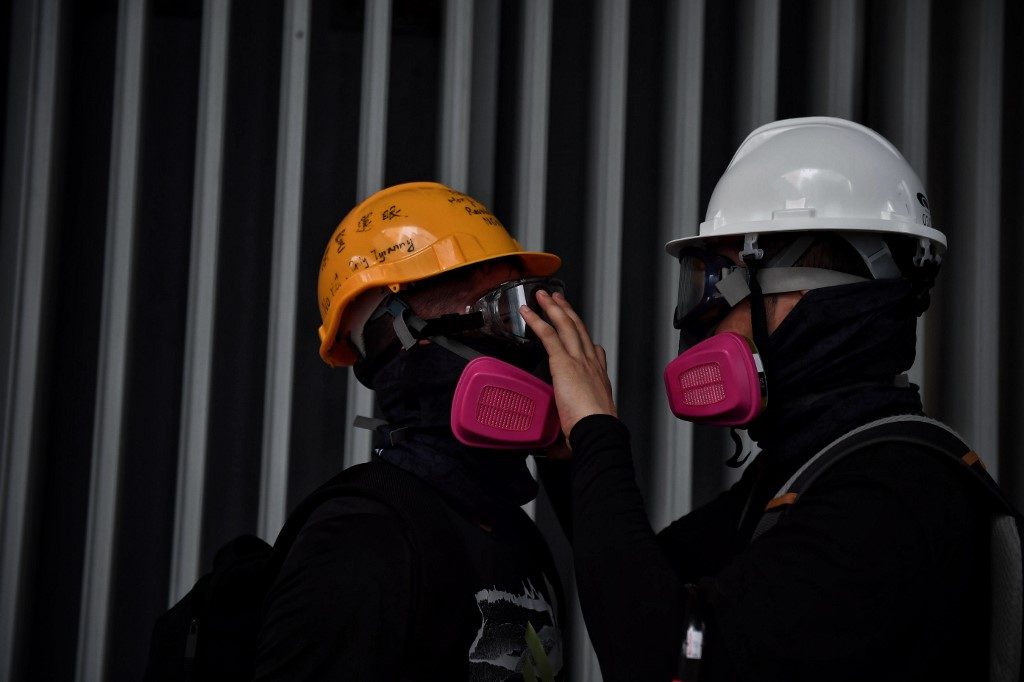 Facebook Twitter Copy URL
Copied
(UPDATED) Police say Tsang Chi-kin, 18, has been charged with rioting and two counts of assaulting officers. The school student faces up to 10 years in prison if convicted.

HONG KONG (UPDATED) – A teenage pro-democracy protester shot by a Hong Kong police officer was on Thursday, October 3, charged with rioting, as authorities were reportedly set to ban the wearing of face masks at public rallies.

Tsang Chi-kin, 18, was hit in the chest during clashes on Tuesday, October 1, a day which saw some of the worst violence in almost 4 months of unrest.

Police said Tsang has also been charged with two counts of assaulting officers. The school student faces up to 10 years in prison if convicted.

It came as reports emerged that Hong Kong will soon ban the wearing of face masks at protests, in a clampdown on pro-democracy rallies that have rocked the strife-torn city.

Seething public anger against Chinese rule of the semi-autonomous city has underscored increasingly violent confrontations between police officers and demonstrators, with no sign of an end.

Protesters have used face masks to avoid identification – along with yellow helmets, goggles and respirators to protect themselves from tear gas and police projectiles.

Officials plan to deter future gatherings by introducing the ban under a colonial-era emergency law that bypasses the city’s legislature, according to the South China Morning Post.

City leader Carrie Lam is expected to announce the measure on Friday, October 4, the Post reported.

Pro-Beijing lawmakers in the financial hub have renewed their calls for Lam to introduce the emergency ordinance since Tuesday, when protests in Hong Kong overshadowed 70th anniversary celebrations for the founding of the People’s Republic of China.

A record 1,400 rounds of tear gas were fired by police to disperse crowds across the city.

“If we had the law…then this would have a deterrent effect on some people,” lawmaker Elizabeth Quat told reporters on Thursday.

But pro-democracy lawmaker Dennis Kwok said the emergency law would signal “the beginning of a slip towards an authoritarian state.”

“The authorities by now should have listened to the Hong Kong people. Their yearning for freedom, liberty and democracy, is not going to go away,” he said.

“The anti-mask law at least gives investors some hope that it could be a way to cool down the protests,” said Steven Leung, at UOB Kay Hian (Hong Kong).

“Some protesters might think twice if they can be identified during protests.”

Hong Kong’s protests were ignited by a now-scrapped plan to allow extraditions to the mainland.

But after Beijing and local leaders took a hardline they snowballed into a wider movement calling for democratic freedoms and police accountability.