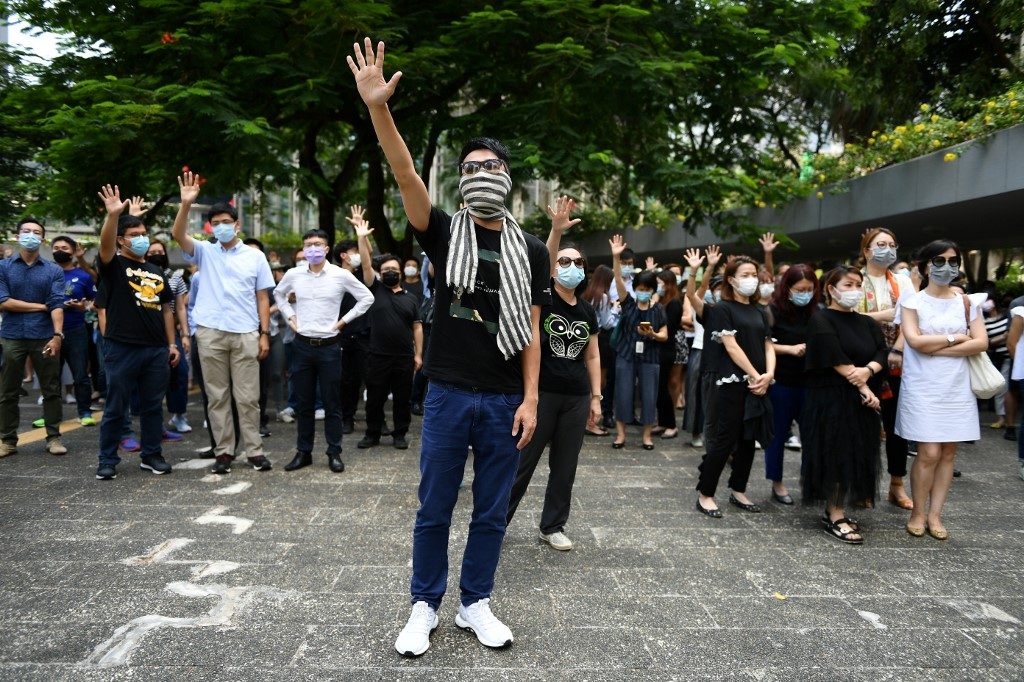 HONG KONG (UPDATED) –  Hong Kong’s government was expected to meet Friday, October 4, to discuss using a colonial-era emergency law to ban pro-democracy protesters from wearing face masks, a move opponents said would be a turning point that tips the financial hub towards authoritarianism.

Hundreds of masked protesters, mostly office workers, rallied in the city’s commercial district ahead of the expected ban while activists have vowed another long weekend of flash-mob protests.

Seething public anger against Chinese rule of the semi-autonomous city has exploded into huge demonstrations and increasingly violent confrontations, with no sign of an end to nearly four months of unrest.

Protesters have used face masks to avoid identification — along with yellow helmets, goggles and respirators to protect themselves from tear gas and police projectiles.

Local media reported embattled leader Carrie Lam was expected to meet her cabinet on Friday morning to decide whether they should enact the Emergency Regulations Ordinance to ban all face coverings.

If passed, the ban would likely be announced later in the afternoon and come into force at midnight, a government source told the South China Morning Post.

But protesters have vowed to defy the law.

“Youngsters are risking their lives, they don’t mind being jailed for ten years, so wearing masks is not a problem,” a 34-year-old officer worker wearing a surgical mask, who gave her first name Mary, told AFP at a protest on Friday afternoon.

The expected ban comes after Hong Kong was rocked by the worst violence on the summer on Tuesday, the same day China celebrated 70 years of Communist Party rule.

Street battles raged for hours between riot police and hardcore protesters while a teenager who was part of a group that attacked police with umbrellas and poles was shot in the chest with a live round – the first such shooting since the protests began.

Protesters have increasingly resorted to hurling bricks and Molotov cocktails while police are firing tear gas and rubber bullets with unprecedented frequency.

On Friday the city’s subway system said 83 of its 91 underground stations had been vandalised in recent months after protesters turned on the operator because it began shutting down some stations ahead of large protests.

Pro-establishment lawmakers and a prominent police officer association have ramped up their calls for the government to invoke the emergency laws, which were last used 52 years ago by the British during deadly leftist riots.

The law allows the city’s leader to make “any regulations whatsoever” in the event of an emergency or public danger without the need to go via’s the city’s parliament.

During the 1967 riots – a period where more than 50 people were killed in a year-long leftist bombing and murder spree – the British used the ERO to give police extra powers of arrest and rolled out widespread censorship of the press.

But critics have countered that bypassing the legislature and giving Lam the power to make any law would be a slippery slope for an international finance hub that owes its economic success to its reputation for rule of law and judicial independence.

“This is a watershed. This is a Rubicon,” pro-democracy lawmaker Claudia Mo told AFP. “And I’m worried this could be just a starter. More draconian bans in the name of law could be lurking around the corner.”

It is also not clear how a face mask ban would be enforceable.

Since a deadly SARS outbreak in 2003, face masks have become ubiquitous in Hong Kong.

Even moderate protesters have already shown a willingness to break the law in huge numbers, appearing at unsanctioned rallies in their tens of thousands.

Simon Young, a law professor at the University of Hong Kong, said a mask ban might deter some moderates from hitting the streets.

“But it could well have the effect of bringing more people out simply because they feel the need to protest against the exercise of executive authority,” he told AFP. – Rappler.com