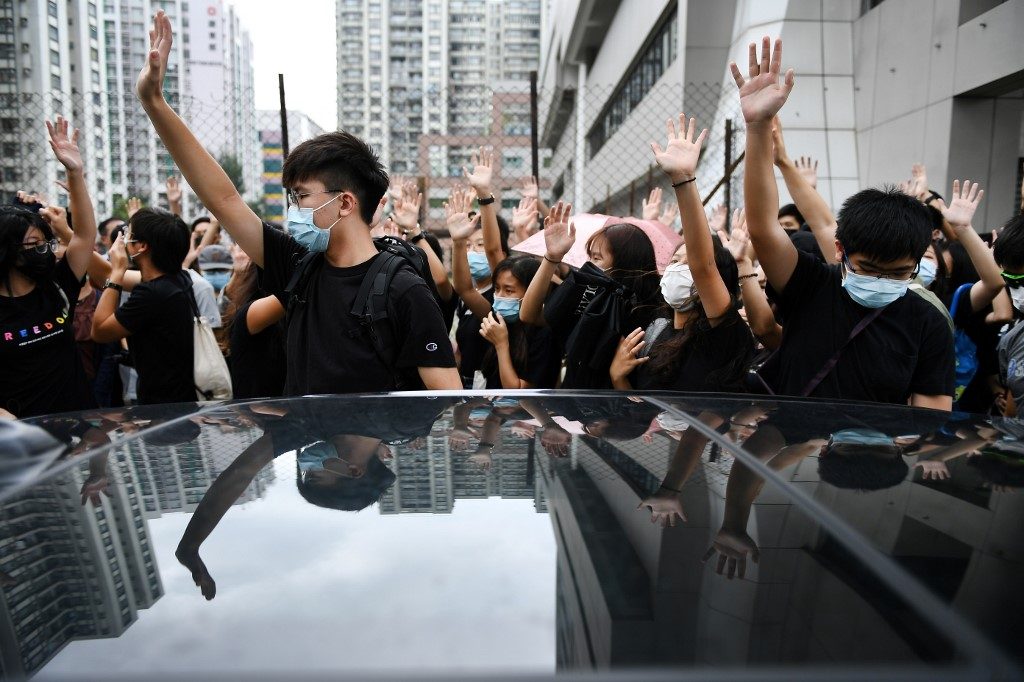 Facebook Twitter Copy URL
Copied
The face mask ban does little to halt the chaos or stop huge crowds of masked protesters from hitting the streets in defiance as opponents decried the move as a slide towards authoritarianism.

But the ban did little to halt the chaos or stop huge crowds of masked protesters from hitting the streets in defiance as opponents decried the move as a slide towards authoritarianism.

On Monday morning a male university student and a 38-year-old woman were the first two people to be charged with illegally wearing a mask as supporters packed the courtroom, many wearing face coverings.

They were both charged with unlawful assembly, which carries up to three-years jail time, and with defying the mask ban, which has a maximum one year sentence. Both were released on bail.

Outside the court demonstrators queued to get in, some chanting slogans such as “Wearing a face mask isn’t a crime” and “The law is unjust”.

Many said they feared the mask ban was just the first of more emergency orders to come.

“It’s an excuse to just introduce other totalitarian laws, next is martial law,” one protester outside the court, who gave his surname Lo, told AFP.

On the mainland, Beijing flexed its muscles by pulling a top US basketball team’s games from state broadcaster CCTV after its manager posted a tweet featuring the message “Fight for Freedom. Stand with Hong Kong.”

Houston Rockets boss Daryl Morey attempted to calm the water with a string of emollient tweets and the NBA tried to distance itself from the comments.

But CCTV said it was “strongly opposed” to Morey’s “improper remarks” and would no longer air Rockets games.

Hong Kong has been battered by 18 consecutive weekends of unrest, fanned by widespread public anger over Chinese rule and the police response to protests.

The rallies were ignited by a now-scrapped plan to allow extraditions to the mainland, which fuelled fears of an erosion of liberties promised under the 50-year “one country, two systems” model China agreed to ahead of the 1997 handover by Britain.

After Beijing and local leaders took a hard stance, the demonstrations snowballed into a wider movement calling for more democratic freedoms and police accountability.

Lam has refused major concessions, but struggled to come up with any political solution.

The last week has seen a particularly intense period of protest.

The worst clashes to date erupted on Tuesday as China celebrated 70 years of Communist Party rule, with a teenager shot and wounded by police as he attacked an officer.

On Friday, Lam announced the face mask ban, sparking renewed protests in which a 14-year-old boy was shot and wounded when a plainclothes police officer, who was surrounded by a mob of protesters throwing petrol bombs, fired his sidearm.

Throughout the weekend largely peaceful flash mob rallies and marches featuring people wearing masks broke out across the city.

Sunday witnessed the largest protests, with police firing tear gas to disperse tens of thousands of people marching on the main island. Clashes broke out at multiple other locations throughout the day.

In one incident, a taxi driver was beaten bloody in the district of Sham Shui Po after he drove into a crowd that had surrounded his car, pinning a wounded woman between his vehicle and a shop.

A warning flag was even raised on the roof of a People’s Liberation Army barracks after protesters shone laser pens at the building, the first time Chinese troops in the city have made such a move.

The city’s subway system – which carries up to 4 million people a day – has been largely out of action since Friday night with only a small number of stations open and a limited number of lines running.

Lam, who has record low approval ratings, defended her use of the emergency powers and warned she would make more measures if the unrest did not abate.

The law, last used by the British during riots in 1967, allows her to bypass parliament and make “any regulations whatsoever” during a time of public danger.

But opponents say the law has sparked a constitutional crisis and undermined Hong Kong’s reputation as a finance hub built on rule of law and an independent judiciary. – Rappler.com