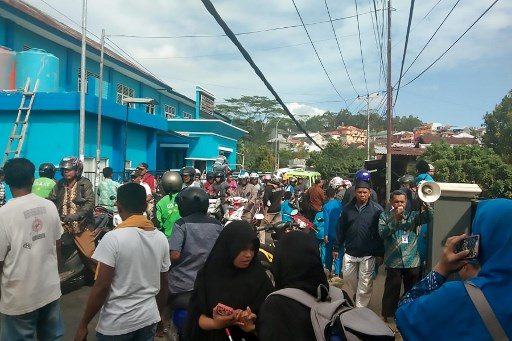 JAKARTA, Indonesia – Thousands of Indonesians are still in shelters nearly two weeks after a deadly earthquake sparked a stream of fake news and hoaxes warning that an even bigger disaster was looming, the government said Monday, October 7.

The local government has declared a state of emergency until Wednesday, with nearly 135,000 people in evacuation shelters and tents.

Many displaced people are too scared to return to their homes in the remote Maluku islands after the area suffered more than 1,000 aftershocks following a 6.5-magnitude quake on September 26 that killed dozens and damaged scores of homes and other buildings, the agency said.

Terrified residents ran into the streets following the quake, which sparked landslides that buried at least one of the victims.

The strong jolt killed 37 people, including several young children, and injured dozens of others.

More than 6,000 houses were damaged, according to official figures.

Fears about aftershocks have been aggravated by a stream of hoaxes and fake news — mostly on WhatsApp and other messaging services — that warned a tsunami-generating quake was about to strike.

“It’s up to you if you want to believe me or not, but I talked with my relative and apparently Ambon is going to sink in the next few days,” said one message circulated on WhatsApp.

“There are so many hoaxes about a bigger earthquake and tsunami,” he told AFP.

“People are scared and so they chose to stay in shelters,” Wibowo added.

Even some whose houses weren’t damaged in the quake have refused to go home despite efforts to convince them it was safe, Wibowo said.

“Many people also thought they’re not allowed to go back during the state of emergency, which is actually false,” he added.

The Southeast Asian nation is one of the most disaster-prone nations on Earth.

It experiences frequent seismic and volcanic activity due to its position on the Pacific “Ring of Fire”, where tectonic plates collide.

Last year, a 7.5-magnitude quake and a subsequent tsunami in Palu on Sulawesi island left more than 4,300 people dead or missing.

In 2004, a devastating 9.1-magnitude earthquake struck off the coast of Sumatra and triggered a tsunami that killed 220,000 throughout the region, including around 170,000 in Indonesia. – Rappler.com