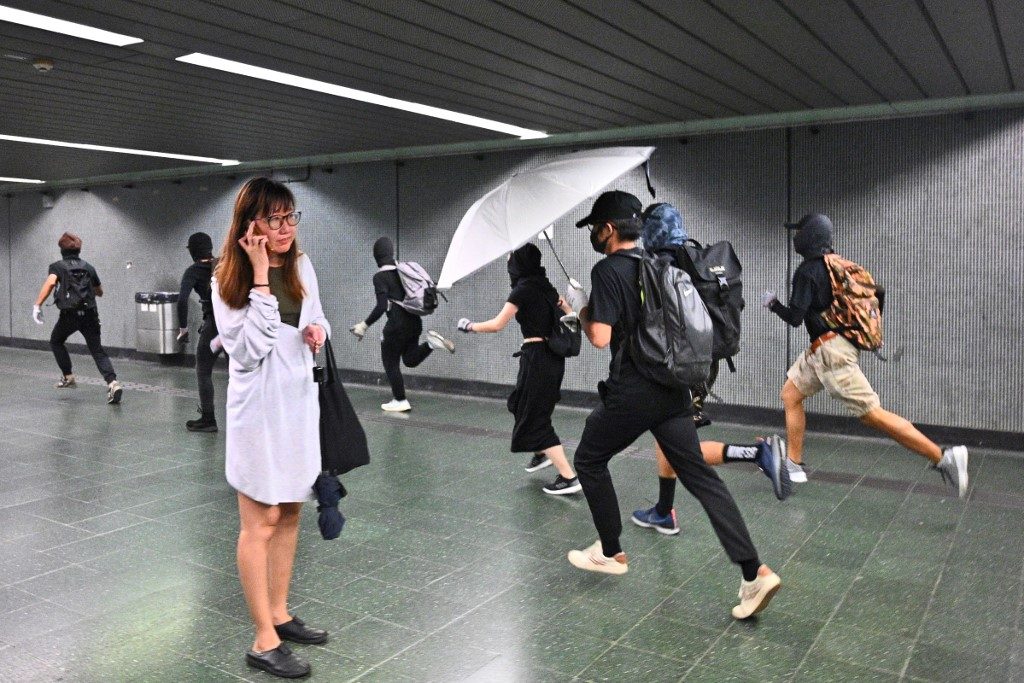 Facebook Twitter Copy URL
Copied
Carrie Lam tells reporters that while she believes the city's authorities can cope with the unprecedented troubles, China could be called upon if the situation becomes 'so bad'

The financial hub has been gripped by 4 months of rallies, and last weekend saw much of the city grind to a halt as masked demonstrators took to the streets in defiance of a controversial ban on face coverings.

Lam’s decision last Friday, October 4, to invoke colonial-era emergency powers – not used for half a century – to impose the ban sparked some of the most violent scenes since the crisis began, as hardcore protesters trashed dozens of subway stations, vandalized shops with mainland China ties, built fires and blocked roads.

Hong Kong was virtually locked down over the three-day holiday weekend, with the majority of subway stops closed. Thirteen damaged stations remained shut on Tuesday morning as rush-hour commuters returned to work after the long break, although two reopened later.

Lam told reporters that while she believes the city’s authorities can cope with the unprecedented troubles, China could be called upon if the situation becomes “so bad.”

“At this point in time, I still strongly feel that we should find the solutions ourselves. It is also the position of the central government (in Beijing) that Hong Kong should tackle the problem on her own.

“But if the situation becomes so bad, then no options can be ruled out if we want Hong Kong to at least have another chance.”

Lam has faced widespread criticism over her decision to ban face masks – ubiquitous in Hong Kong since a deadly SARS outbreak in 2003 – and thousands of Hong Kongers flouted the prohibition during an unsanctioned mass march on Sunday, October 6.

Two people – a male university student and a 38-year-old woman – appeared in court on Monday, October 7, charged with illegally wearing masks, and supporters wore their own face coverings in the courtroom.

They were both charged with unlawful assembly, which carries up to 3 years’ jail time, and with defying the mask ban, which has a maximum one-year sentence. Both were released on bail.

Another 26 people who were arrested on Sunday in Wan Chai district have been charged with rioting and 14 of them additionally in violation of the mask ban.

A total of 77 people have been arrested for defying the ban since it came into place over the weekend, police said, adding that 2,363 people had been arrested overall since June.

Lam told journalists it was “too early” to say whether the anti-mask law was effective or not.

“I’m sure you’ll agree that for any new policy or new legislation, it will take time to be effectively implemented,” she said.

Lam also would not be drawn on a suggestion by one of her cabinet members, the veteran pro-Beijing politician Ip Kwok-him, that Hong Kong may curb access to the internet in a bid to contain the protests. (READ: Hong Kong cabinet member floats internet curbs to contain unrest)

The leader insisted she was “very committed” to using political, legal and policy instruments, including dialogue, to address some of the “deep-seated problems” in the city.

According to Hospital Authority figures, 10 of the 13 people admitted to hospital over the weekend were in a stable condition on Tuesday while 3 had been discharged.

US President Donald Trump earlier urged a “humane solution” to the crisis, telling reporters: “I think they have to do that in a peaceful manner.”

He remarked on the “great people over there” and said protesters had been “flying the American flag.”

However, Trump avoided expressing support for the demonstrators’ defiance and questioned whether they were losing steam.

At the start, “I saw two million people. I’ve never seen anything like it,” Trump said. “The crowd size is much smaller now, so maybe that’s saying something.”

While not referencing Trump, Lam said: “I hope anyone, especially foreign members, whenever they have to comment on Hong Kong’s current situation, they have to look at the fact objectively.”

And when asked for her thoughts on comments made by Hong Kong’s last governor Chris Patten that the face mask ban was “madness,” Lam said: “You cannot make a spiteful comment on Hong Kong, or support the violent protesters, claiming that their way is peaceful and it’s their freedom.