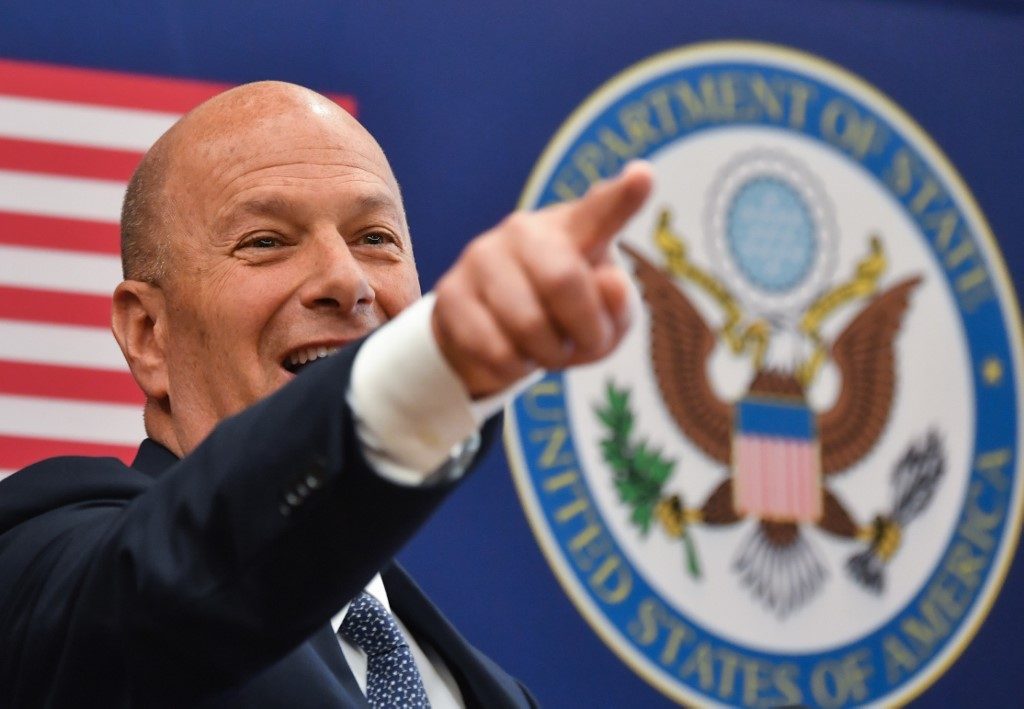 WASHINGTON DC, USA – The White House on Tuesday, October 8, blocked a top US diplomat from speaking to Congress as part of the impeachment investigation of Donald Trump, dramatically escalating the battle with Democrats over his presidency.

Ambassador to the European Union Gordon Sondland had voluntarily agreed to be deposed by House Democrats who were expected to press him about Trump’s effort this year to pressure Ukraine into investigating a political rival, his lawyer said.

But “early this morning, the US Department of State directed (him) not to appear today for his scheduled transcribed interview,” Sondland’s attorney Robert Luskin said in a statement.

While the lawyer pointed to State, Trump swiftly owned the decision, telling followers on Twitter that he would “love” to have sent Sondland to sit for a Capitol Hill deposition.

“But unfortunately he would be testifying before a totally compromised kangaroo court, where Republican’s rights have been taken away, and true facts are not allowed out for the public to see,” the president said.

The move, just hours before Sondland was to meet lawmakers, intensifies the confrontation between the White House and congressional Democrats investigating the president for possible impeachable offenses including obstruction of justice.

Democrats leading the probe have repeatedly stated that administration efforts to impede the investigation will be construed as obstruction. They hammered the point home Tuesday after the White House blockage.

Sondland was one of a handful of US diplomats on a text message chain, provided to Democrats leading the probe, that go to the heart of the focus of the investigation.

The messages between the diplomats, Trump’s personal lawyer Rudy Giuliani and a Ukrainian presidential aide show that they helped coordinate administration efforts to pressure Ukraine into investigating Trump’s political rivals as it sought aid and access.

In their messages, top US diplomats discussed leveraging a potential summit between Trump and Ukraine’s newly inaugurated President Volodymyr Zelensky on a pledge to investigate 2016 election interference and a company that employed the son of Joe Biden, the frontrunner in the Democrat race to challenge Trump in 2020.

Luskin said Sondland – a wealthy hotel investor and major donor to Trump’s 2016 presidential campaign – had traveled from Brussels to Washington and was prepared to testify.

“Ambassador Sondland believes strongly that he acted at all times in the best interests of the United States, and he stands ready to answer the Committee’s questions fully and truthfully.” – Rappler.com