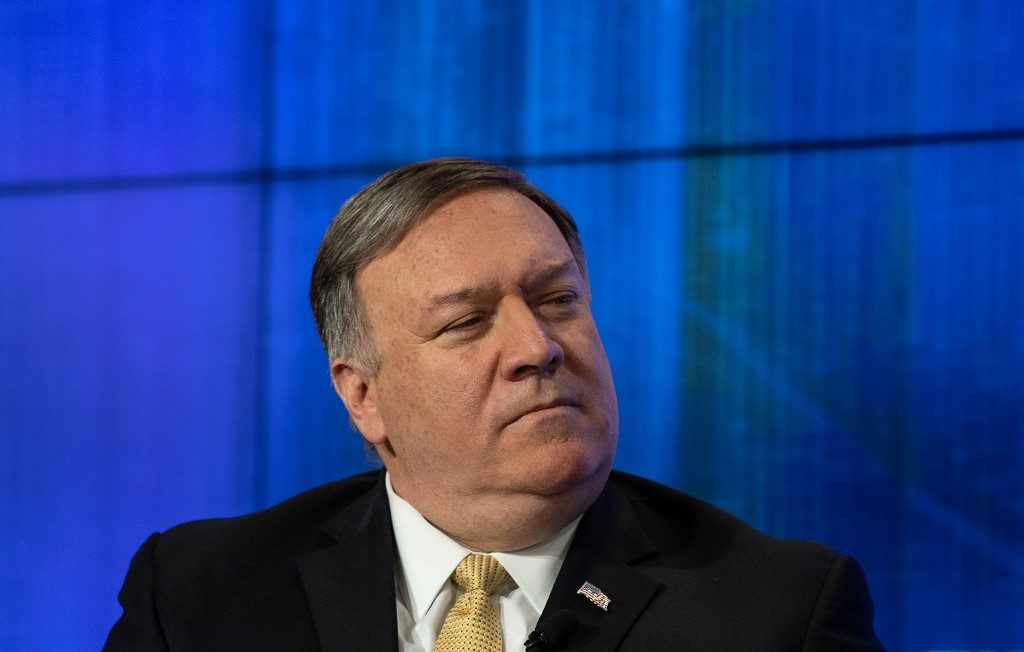 WASHINGTON, DC, USA (UPDATED) – The United States said Tuesday, October 8, it would curb visas for Chinese officials until Beijing ends its “repression” of Uighurs and other Muslims in the western region of Xinjiang, a day after imposing commercial restrictions.

The one-two punch by President Donald Trump’s administration marks the most forceful attempt by a foreign power to address what some rights groups call a historic crisis in Xinjiang, and comes amid a range of feuds between the United States and China.

“China has forcibly detained over one million Muslims in a brutal, systematic campaign to erase religion and culture in Xinjiang,” Secretary of State Mike Pompeo wrote on Twitter.

“China must end its draconian surveillance and repression, release all those arbitrarily detained and cease its coercion of Chinese Muslims abroad,” he said.

In an accompanying statement, Pompeo said that the State Department would restrict visas granted to government and ruling Communist Party officials involved in “detention or abuse” of Uighurs, Kazakhs or members of other predominantly Muslim ethnic groups in Xinjiang.

The order will also affect their family members, including children who may be seeking to study in the United States.

The State Department said it could not specify which officials were affected due to US confidentiality laws.

But lawmakers have specifically asked for action against Chen Quanguo, the Communist Party chief for Xinjiang.

Reputed within the party for his handling of minority groups, he earlier led iron-fisted policies aimed at crushing dissent in Tibet.

China voiced anger at the move, denying any human rights abuses in Xinjiang and accusing the United States of using “made-up pretexts for its interference.”

“The counter-terrorism and de-radicalization measures in Xinjiang are aimed to eradicate the breeding soil of extremism and terrorism,” the Chinese embassy in Washington said on Twitter.

“They are in line with Chinese laws and international practices,and are supported by all 25 million people of various ethnic groups in Xinjiang,” it said.

The visa step came hours after China issued a similar protest over action by the US Commerce Department.

It blacklisted 28 Chinese entities including video surveillance firm Hikvision and artificial intelligence companies Megvii Technology and SenseTime over their involvement in Xinjiang.

Rights groups say more than one million Uighurs and other Muslims are being held in a vast network of camps in Xinjiang aimed at homogenizing the population to reflect China’s majority Han culture.

Witnesses say that China has sought to force Uighurs to drop core practices of Islam such as fasting during Ramadan and abstaining from alcohol and pork.

China, after initially denying the camps, describes them as vocational schools aimed at dampening the allure of Islamist extremism and violence.

Authorities have cracked down especially hard since 2009, when nearly 200 people died in riots in Xinjiang’s capital Urumqi, which has seen an influx of Han Chinese.

The violence was sparked by news of a factory brawl in southern China in which two Uighur migrant workers were killed.

Pompeo has previously called China’s treatment of Uighurs one of the “worst stains on the world” and likened the camps to actions by Nazi Germany.

But few Muslim leaders have spoken out against a rising China with the exception of President Recep Tayyip Erdogan of Turkey, which has linguistic and cultural connections with the Uighurs.

Rights advocates also say that Trump has been inconsistent in exercising pressure over human rights, with the tycoon president warmly embracing authoritarian leaders of allies such as Egypt and Saudi Arabia.

The actions on Xinjiang come as a trade war shows no signs of abating between the United States and China, the world’s two largest economies, which have imposed tariffs on billions of dollars worth of each other’s goods.

At the United Nations last month, Trump also warned China that the United States was watching Hong Kong, where months of swelling protests have demanded that Beijing respect the city’s semi-autonomous status. – Rappler.com