Facebook Twitter Copy URL
Copied
The Russian government has a controversial list of foreign agent organizations, which implies spying for a foreign government. This has led to many of the groups closing down.

MOSCOW, Russia – Russia on Wednesday, October 9, upped the pressure on opposition leader Alexei Navalny, declaring his organization a “foreign agent” that will be subject to increased state monitoring.

Navalny’s Anti-Corruption Foundation (FBK), which often publishes investigations into state officials, will now have to present itself as a “foreign agent” on official documents.

Russia started a controversial list of foreign agent organizations, which in Russian implies spying for a foreign government, in 2012. This has led to many of the groups closing down.

Navalny called the move “absolutely illegal” and said it was “obviously a direct order from (President Vladimir) Putin”.

“FBK never received a single kopeck of foreign money,” he wrote on Twitter.

He demanded that the justice ministry publicly prove that the foundation, which seeks donations from the public, received funds from outside Russia.

“Putin is terribly afraid of FBK,” he wrote.

Putin’s spokesperson Dmitry Peskov meanwhile said the president had nothing to do with the decision, adding it was a “matter for the justice ministry”.

FBK director Ivan Zhdanov said it was “another attempt to suffocate” the foundation, which has often been raided by authorities.

He said the group is funded “exclusively by Russian citizens”. 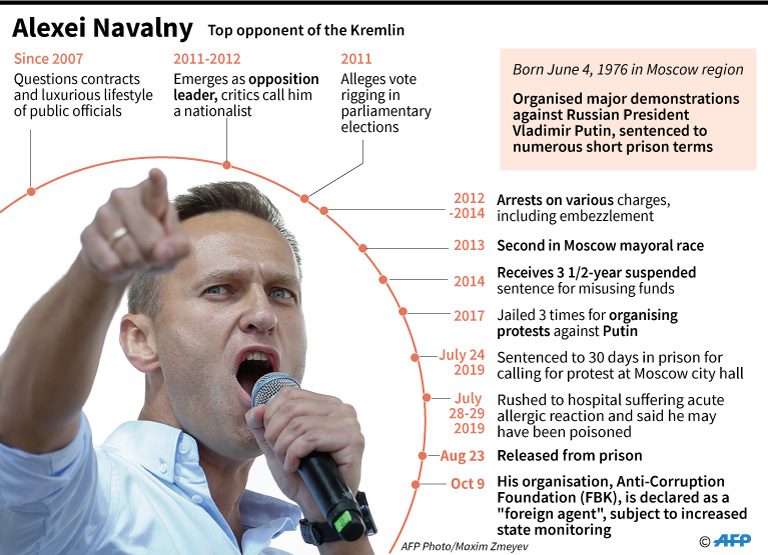 Navalny’s spokeswoman Kira Yarmysh wrote on Twitter that the decision was intended to “put pressure on us and attempt to stop our activity.”

Groups deemed to have “political” activities and international funding can be labelled “foreign agents”.

A justice ministry representative told Russian media that FBK had received 140,000 rubles ($2,300) in transactions from Spain and the US.

The tag, reminiscent of the Soviet-era crackdown on dissidents, obliges them to submit documents every 3 months outlining their finances.

The measure comes as Russian officials accuse the West of trying to undermine the country, characterizing internal criticism as the work of spies and traitors.

A young fan base

While barred from mainstream politics, Navalny has kept trying to expose the lavish wealth of Russia’s elites, broadcasting the findings of his investigations to millions of Russians on social media and YouTube.

This has helped the Yale-educated lawyer win a young fan base in the country.

In August, Russian investigators launched a money-laundering probe into FBK, accusing it of taking money that was procured illegally.

Last month, investigators raided dozens of Navalny’s regional offices, as well as the homes of his supporters following mass opposition protests in Moscow this summer.

Navalny blamed the raids on Kremlin “hysteria” sparked by the ruling party’s losses in local elections last month. He said police searched more than 200 addresses in 41 cities across Russia.

Allies of Putin suffered major losses in the Russian capital during the September vote.

Navalny organized the protests after popular opposition politicians were barred from standing in the Moscow parliament election.

The 43-year-old missed several of the demonstrations while serving a 30-day jail term for organizing previous unauthorised rallies.

Since emerging as the Kremlin’s chief critic and a highly effective campaigner and organizer, Navalny has faced repeated legal action apparently aimed at hindering his activities.

He has often been jailed and physically attacked, but has vowed to press ahead with his campaign to change Russia.

Navalny was barred from challenging Putin on the ballot box in Russia’s 2018 presidential election.

He nonetheless toured Russia ahead of the vote in an American-style campaign to rally his supporters, and set up headquarters across the country.

Putin has refused to pronounce his name in public. – Rappler.com