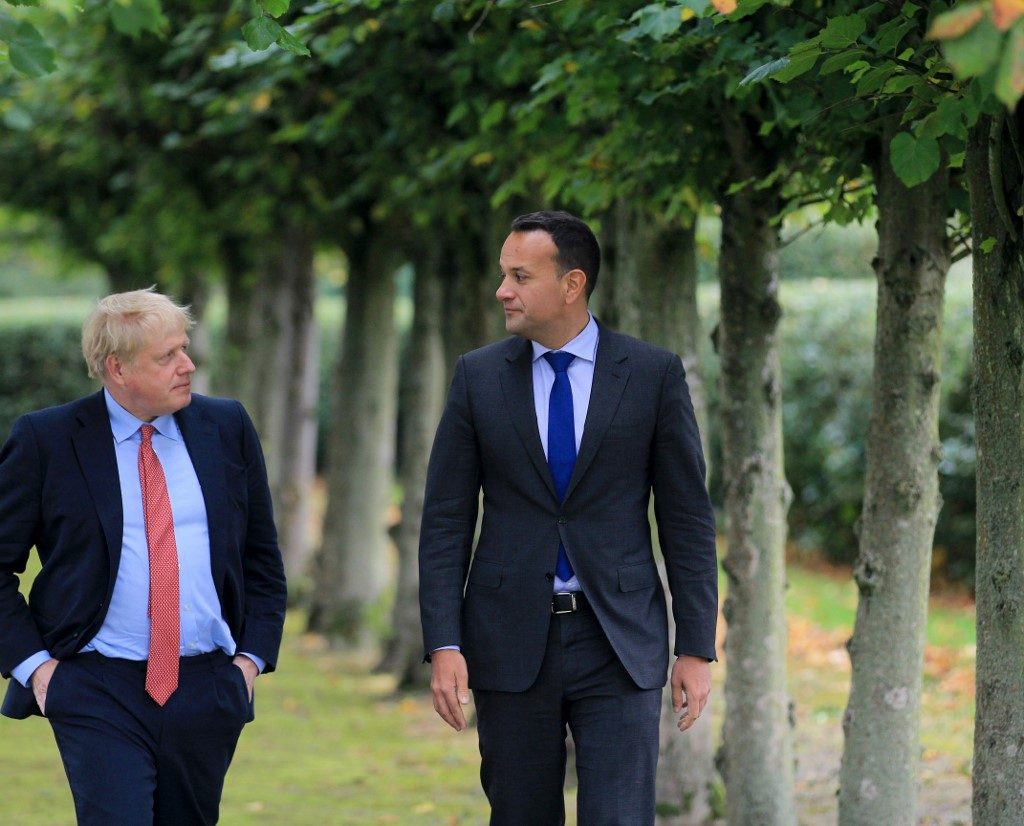 Time is running out to sign off on any deal at an October 17-18 European Union summit, the last such meeting before Britain’s scheduled departure at the end of the month.

The main sticking point in the divorce is how to keep open the border between the British province of Northern Ireland and the Irish republic.

After “detailed and constructive” talks near Liverpool in northwest England, Johnson and Varadkar said finding a deal was in the interests of all sides – but made clear more work was needed.

“They agreed that they could see a pathway to a possible deal,” said a joint statement from both their offices.

“They agreed to reflect further on their discussions and that officials would continue to engage intensively on them.”

Varadkar will now meet with EU officials, while British Brexit Secretary Steve Barclay is due in Brussels on Friday, October 11, for talks with the bloc’s chief negotiator Michel Barnier.

Johnson has vowed Britain will end its five-decade membership of the EU on October 31, with or without agreeing exit terms.

But he could be forced to seek to delay Brexit for a third time if he fails to agree a deal by next week’s summit.

His high-stakes meeting with Varadkar at Thornton Manor – more commonly used for luxury weddings than discussing international divorce terms – comes after recriminations flew on both sides over who was to blame for the impasse.

French President Emmanuel Macron voiced frustration on Thursday, saying: “Brexit is a British domestic crisis, not a European one.”

He said what was important now was to finalize negotiations and see if there was “something that I hope could fly.”

But he added: “At the very end this is a British responsibility” on whether it leaves the EU with or without a deal or even cancels the Brexit process outright.

Negotiations since the 2016 British referendum vote to leave the EU have been conducted between London and Brussels but Ireland has a key role because of the border issue.

Johnson and Varadkar’s discussion “concentrated on the challenges of customs and consent,” their statement said.

After British MPs rejected the previous “backstop” plan to keep the border open, Johnson presented a new proposal last week – but it received a cold reception in Brussels.

He proposes Northern Ireland stay aligned to the EU’s single market but remain in a separate UK-wide customs territory, envisaging customs but no regulatory checks on the frontier.

Northern Ireland’s opt-in to the plan would be open to four-yearly review by the province’s devolved assembly and executive.

But Brussels is adamant it will not agree to any plan that undermines the single market – which allows free movement of goods across Europe – or risks exacerbating tensions on the island of Ireland.

A free-flowing border is considered vital to maintaining peace in Northern Ireland, which was plagued by 3 decades of sectarian violence, which was largely brought to an end with the 1998 Good Friday peace accords.

Before the meeting with Johnson, Varadkar told Ireland’s parliament that he would work “until the last moment” to get a deal, but added: “Certainly not at any cost.”

After days of both sides trading increasingly bitter accusations of inflexibility, the diplomacy appears to be intensifying in a late bid to find a breakthrough.

Speaking on Wednesday, October 9, Brexit Secretary Barclay said: “We’ve put forward serious proposals and have been willing to be flexible. Now it’s time for the EU to do the same.”

But his EU counterpart Barnier struck a downbeat tone, telling the European Parliament that “we’re not on the point of envisioning and finding a deal.”

Guy Verhofstadt, the European Parliament’s Brexit coordinator, meanwhile said Britain’s proposals were “not serious” and were aimed at starting a “blame game.”

“The real traitor is he or she who risks bringing disaster upon his country and it’s citizens, pushing the UK out of the EU,” the former Belgian premier tweeted.

Uncertainty about Brexit has weighed on Britain’s economy, and gross domestic product contracted by 0.1% in August, the Office for National Statistics said on Thursday. – Rappler.com