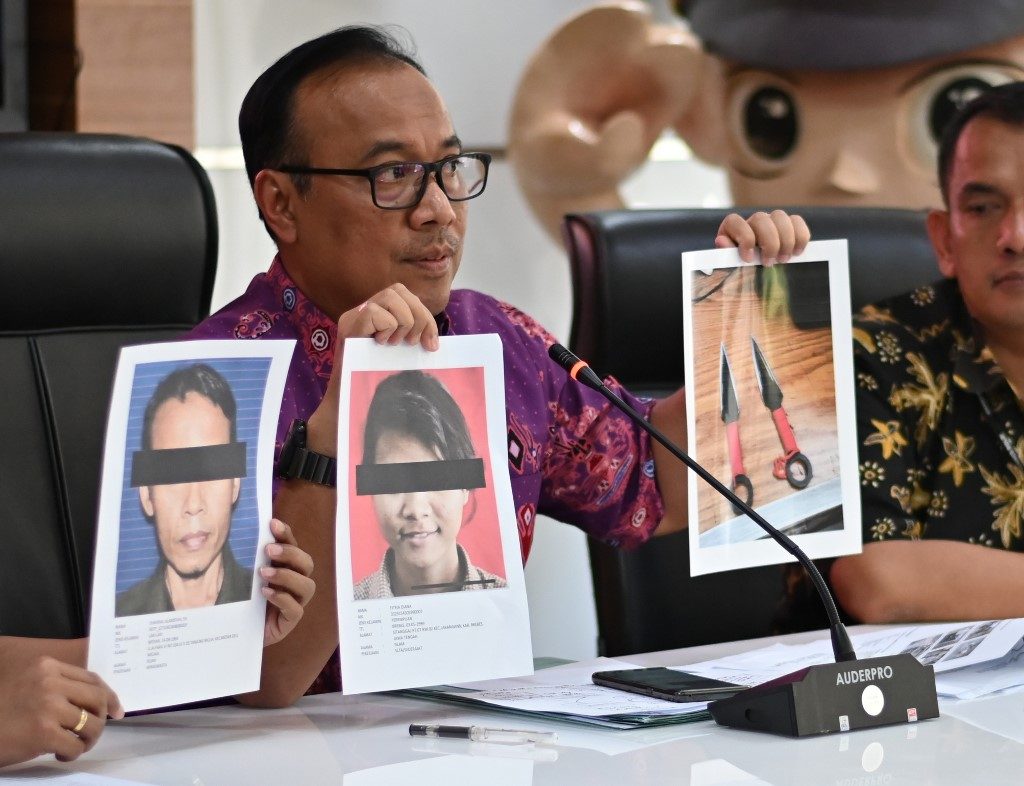 Facebook Twitter Copy URL
Copied
Security Minister Wiranto, who is knifed twice in the stomach during an official visit on Thursday, is said to be recovering after emergency surgery

Police were searching for more suspects in the wake of the assassination attempt on Wiranto, a 72-year-old former army chief who goes by one name.

The minister was knifed twice in the stomach as he left his vehicle in Pandeglang on Java island during an official visit on Thursday.

“Although there are already security precautions, they should be improved so what happened to (Wiranto) never happens again,” Widodo told reporters in Jakarta on Friday.

A 31-year-old man and a 21-year-old woman, reportedly a married couple, were arrested at the scene.

They were later identified as members of Jamaah Ansharut Daulah (JAD), an extremist network loyal to the Islamic State group.

Widodo said he had ordered the national police and intelligence agency chiefs to pursue other suspects within JAD, which was responsible for several previous attacks — including deadly suicide bombings at churches in Indonesia’s second-biggest city Surabaya last year.

The attack came shortly before Widodo begins his second term as president of the Southeast Asian archipelago of 260 million people.

“An attack like this should set off alarm bells for security personnel to increase their caution,” said Ridwan Habib, a terrorism researcher at the University of Indonesia.

Indonesia, the world’s biggest Muslim-majority nation, has long struggled with attacks by Islamist militants, including the 2002 Bali bombings.

Saturday marks the 17th anniversary of the attack in Bali that killed over 200 people — Indonesia’s deadliest terror incident.

Wiranto was recovering on Friday.

“I visited him earlier today. He could talk but still looked weak,” presidential chief of staff Moeldoko, who also goes by one name, told AFP.

“He remains in intensive care.”

The male suspect had reportedly been under surveillance by Indonesia’s intelligence agency for hoarding sharp weapons.

Some past militant attacks have been against police and other state symbols, but Thursday’s incident is thought to be the first known assassination attempt by JAD on an Indonesian politician.

Wiranto, the retired chief of the armed forces and a failed presidential candidate, was appointed to his post in 2016 and oversees several departments, including the foreign affairs and defence ministries.

A major figure in Indonesian politics, he has faced controversy over alleged human rights violations and allegations of crimes against humanity linked to Indonesia’s brutal occupation of East Timor.

In May, police said Wiranto and three other top officials were targeted in a failed assassination plot linked to deadly riots in Jakarta after Widodo’s re-election victory.

A group of six people – arrested before they could carry out the killings – hoped the killings would plunge the country into chaos, police said at the time. – Rappler.com