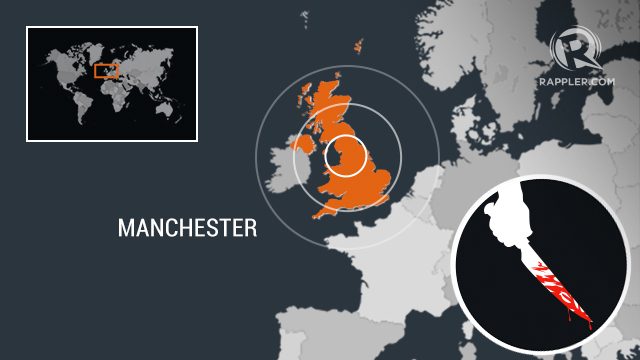 The man in his 40s was “lunging and attacking people” with a large knife in the Arndale shopping center, Police Chief Russ Jackson said.

The attack comes two years after Manchester was rocked by a suicide bombing that killed 22 people after a concert by pop star Ariana Grande.

“The man attacked people around him and we understand 5 people were injured by him,” Jackson told a press conference.

“Although the injuries are nasty, we are told that, thankfully, none are life-threatening.”

The suspect was detained within 5 minutes and initially arrested for assault, before this was changed to an accusation of preparing and instigating an act of terrorism.

“We do not know the motivation for this terrible attack. It appears random, is certainly brutal and of course extremely frightening for anyone who witnessed it,” Jackson said.

Nobody else was believed to be involved, nor is there any wider threat at the moment, he added.

Footage posted online appeared to show one police officer restraining the suspect on the floor as another stands over him pointing a Taser.

Two women – one of them aged 19 – were taken to hospital with stab wounds and were said to be in a stable condition following the attack, which happened shortly after 11:00 am (1000 GMT).

A man in his 50s was also being treated while the fourth victim, a woman in her 40s, did not require treatment, police said.

In a statement on Twitter, Prime Minister Boris Johnson said he was “shocked by the incident in Manchester and my thoughts are with the injured and all those affected.”

Among the pictures circulating on social media was one of paramedics screening off a cafe to treat victims after the shopping center was evacuated.

Freddie Houlder, 22, said he was in the center when he heard “a load of screams” before a woman told him she was nearly stabbed.

“Luckily she had quite a thick jacket – she thought originally it was a fake knife because of how easily it grazed off but police came in and said it was a real knife and she burst into tears,” he said.

“I definitely don’t think it was gang violence because this guy was going around trying to stab random people, I believe.”

The Arndale Centre had already been the scene of a terror attack in 1996 when the largest peacetime bomb ever detonated in Britain injured 212.

The 1,500-kilogram (3,300-pound) truck bomb, planted by the Provisional Irish Republican Army, caused an estimated £770 million ($970 million, 880 million euros) in damage, and led to the center being completely redeveloped.

He was later detained under mental health legislation.

The Arndale Centre is near the Manchester Arena, where the Ariana Grande concert attack happened, and the railway station. – Rappler.com