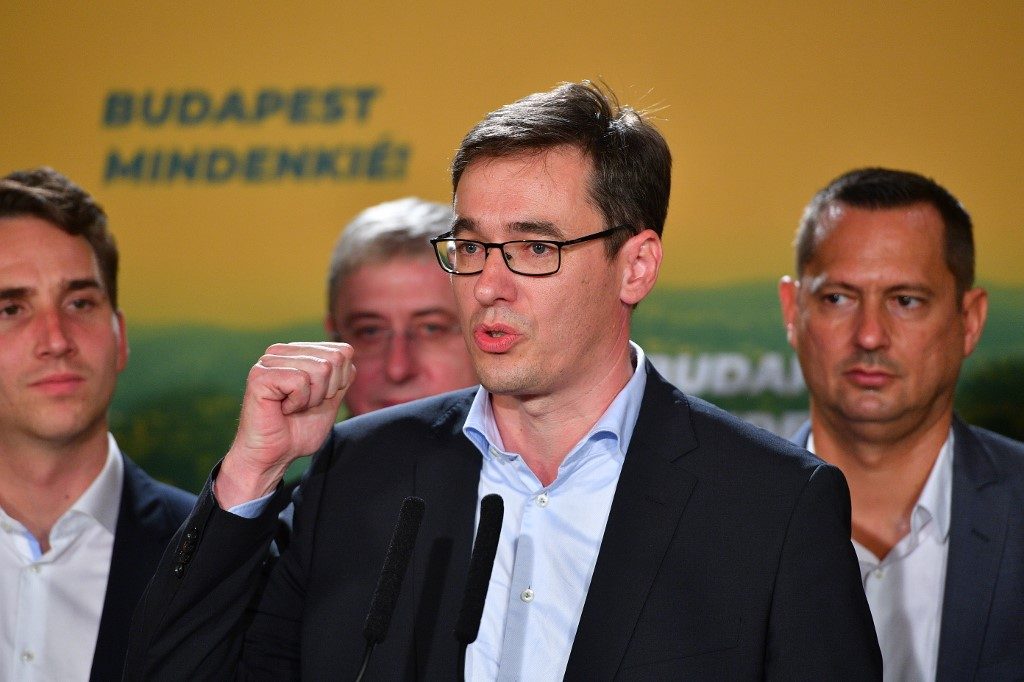 Facebook Twitter Copy URL
Copied
Gergely Karacsony leads by 51% of the vote ahead of incumbent Istvan Tarlos on around 44%, with 82% of votes counted

BUDAPEST, Hungary – Hungary’s opposition scored a shock win in the Budapest mayoralty election on Sunday,  the first electoral blow for nationalist Prime Minister Viktor Orban since he came to power in 2010.

The win was “historic” said the pro-European center-left challenger Gergely Karacsony, 44, who was backed by a wide range of opposition parties from across the political spectrum.

The mild-mannered former political scientist led by 51% of the vote ahead of the incumbent Istvan Tarlos on around 44%, with 82% of votes counted.

“We will take the city from the 20th century to the 21st,” said the pro-EU Karacsony, who was one of the few opposition politicians to win a district in the last election five years ago.

“Budapest will be green and free, we will bring it back to Europe,” he said.

Karacsony had compared the Budapest race to the Istanbul mayoral election in March, in which the candidate of Turkish President Recep Tayyip Erdogan’s party was defeated by the opposition challenger.

“Istanbul voted against an aggressive illiberal power in many ways similar to Orban’s regime,” Karacsony told AFP before the vote.

Since 2010 Orban has reformed Hungary’s institutions and concentrated power and media organs in his hands, and regularly clashed with Brussels over migration and rule-of-law issues.

He has also cruised to consecutive landslide victories at the polls, partly due to electoral rule changes he oversaw.

Fidesz had run a highly negative campaign attacking Karacsony for an allegedly pro-migration stance and his “unsuitability” for the job, while Orban had threatened to withhold cooperation from municipalities lost by his party.

But pre-vote favourite Tarlos and Fidesz, which brands itself as Christian-conservatve, were damaged by a sex scandal involving a Fidesz mayor in the western city of Gyor that erupted last week.

“We acknowledge this decision in Budapest, and stand ready to cooperate,” Orban told supporters at a rally.

The elections were seen as a rare chance for the beleaguered opposition to roll back the power of Fidesz, who also hold a supermajority in parliament, and Orban who has boasted about building an “illiberal state”.

Parties from left to right joined forces in an effort to wrest control of Fidesz-held municipalities and prevent an electoral rout for the first time in almost a decade.

In many municipalities just one opposition challenger lined up against Fidesz.

Polls had still forecast only slight gains nationwide for the opposition outside the captial, but in another surprise it won 10 of 23 of Hungary’s main cities.

The vote was seen as a litmus test for its new strategy of cooperation, which could offer a route to mount a serious challenge to Orban at the next general election in 2022.

“The win (in Budapest) was just the first step on the road to changing Hungary,” said Karacsony.

“It proves that the new strategy of opposition cooperation works, it was its best result in years,” said Andras Biro-Nagy, an analyst with Policy Solutions.

“Budapest is the big prize, but the breakthrough in numerous provincial cities is at least as important,” said Biro-Nagy.

“It is the first crack in the Orban system, and it seems guaranteed that the strategy will continue for 2022,” he said. – Rappler.com