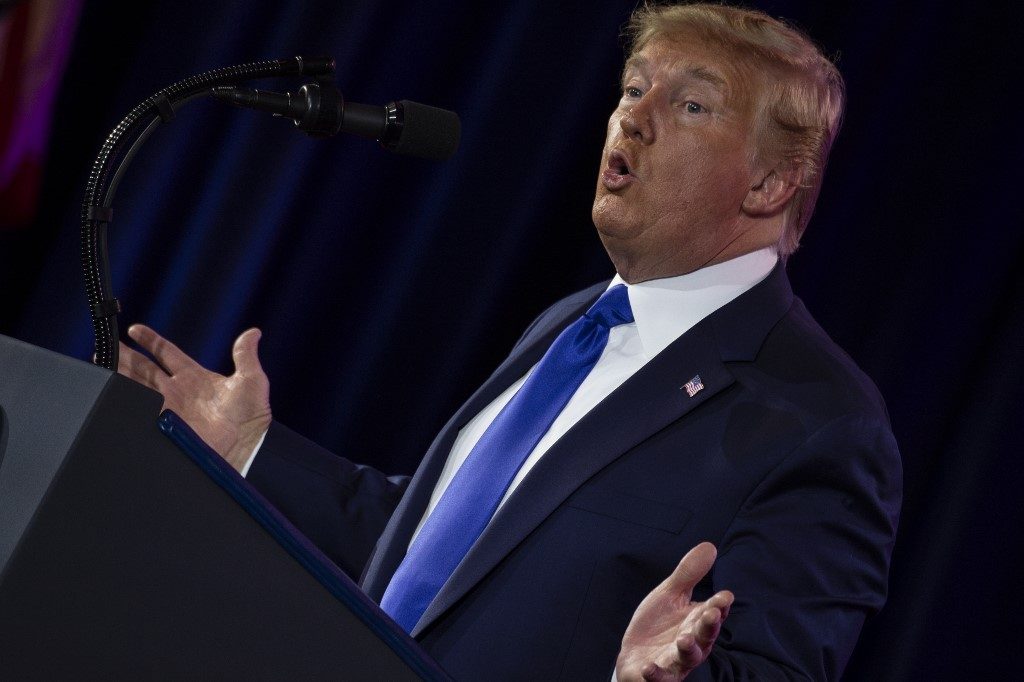 Facebook Twitter Copy URL
Copied
(UPDATED) The meme takes a scene from 'Kingsman: The Secret Service,' using it to show Trump attacking members of a so-called 'Church of Fake News'

In the internet meme – taken from a scene in the movie Kingsman: The Secret Service – the US president’s head is superimposed on a man opening fire at people whose faces have been replaced with the logos of outlets including CNN, the Washington Post and NBC TV.

As the rampage continues inside the “Church of Fake News”, the Trump character strikes late senator John McCain on the back of the neck and torches the head of Senator Bernie Sanders, a Democratic presidential rival.

He throws Republican senator Mitt Romney to the ground and strikes former president Barack Obama in the back and slams him against a wall.

The organizer of last week’s “American Priority” event – which was held at Trump’s resort in Miami – said the clip was part of a “meme exhibit.”

“American Priority rejects all political violence and aims to promote a healthy dialogue about the preservation of free speech,” Alex Phillips told the Times.

CNN wrote on Twitter: “This is not the first time that supporters of the President have promoted violence against the media in a video they apparently find entertaining, but it is by far and away the worst.”

Trump, the White House and his campaign must denounce the clip, the channel said, adding that “anything less equates to a tacit endorsement of violence.”

The White House Correspondents’ Association also called on Trump to denounce the meme.

Tim Murtaugh, a spokesman for Trump’s 2020 election campaign, told the Times the “video was not produced by the campaign, and we do not condone violence.”

Media organizations have come under regular verbal attack from Trump and his supporters.

At rallies, the US president repeatedly encourages the crowd to boo and heckle journalists covering the event, calling them “fake news” and “enemy of the people.”

Trump has previously tweeted a roughly edited video clip of him attacking a wrestler whose head had been superimposed with a CNN logo. – Rappler.com