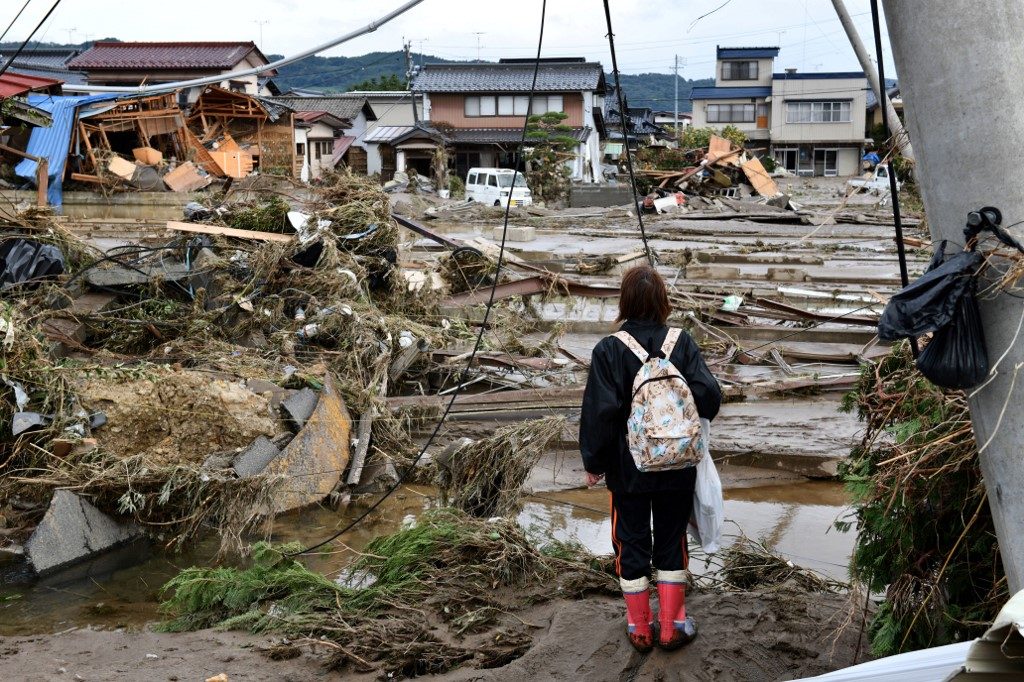 TOKYO, Japan (3rd UPDATE) – Rescuers in Japan were working around the clock Tuesday, October 15, in an increasingly desperate search for survivors of a powerful weekend typhoon that killed more than 70 people and caused widespread destruction.

Hagibis slammed into Japan on Saturday, October 12, unleashing fierce winds and unprecedented rain that triggered landslides and caused dozens of rivers to burst their banks.

By Tuesday night, public broadcaster NHK put the toll at 72, with around a dozen people missing. The government’s tally was lower, but it said it was still updating information.

Prime Minister Shinzo Abe said there was no plan to slow rescue operations, with around 110,000 police, coast guard, firefighters and military troops involved.

“Rescue work and searches for the missing are continuing around the clock,” Abe told parliament.

“Where rivers flooded, work is ongoing to fix spots where banks broke, and water is being pumped out where floods occurred,” he added.

His office said more than 3,000 people were rescued in the wake of the disaster, which affected 36 of the country’s 47 prefectures.

The defense ministry has called up several hundred reserve troops – in addition to active duty soldiers – for the first time since the 2011 earthquake and tsunami.

Emperor Naruhito and Empress Masako were “deeply grieving for so many people affected,” an Imperial Household Agency official said.

The royal couple “expressed their sincere condolences for those who lost their lives…and heartily hope that those who are unaccounted for will be found as soon as possible,” the official said.

Despite the scale of the disaster, the government has no plan to delay a palace ceremony and parade to celebrate Naruhito’s enthronement on October 22.

Government officials warned that more rain was expected throughout the Tuesday in several parts of the country affected by the typhoon.

“We ask people not to drop their guard and to remain fully alert,” chief cabinet secretary Yoshihide Suga told reporters.

Hagibis crashed into land packing gusts up to 216 kilometers (134 miles) per hour, but it was the storm’s heavy rain that caused the most damage.

Deaths were reported across many prefectures and included a man whose apartment was flooded, a municipal worker whose car was caught in rising waters and at least 7 crew aboard a cargo ship that sank in Tokyo bay on Saturday night.

Tens of thousands of people spent Monday night, October 14, in government shelters, with many unsure when they would be able to return home.

The government pledged financial support to affected regions without specifying how much aid it would set aside.

“Support for the victims of the disaster is an urgent task,” Abe said.

“There are concerns that the impact on daily life and economic activities may be long-lasting.”

Another area affected by the storm was Fukushima, where several bags containing soil and plants collected during nuclear decontamination efforts were washed away.

“Ten bags out of 2,667 were swept into a river during the typhoon, but 6 of them were recovered yesterday,” environment ministry official Keisuke Takagi told Agence France-Presse, adding that the remaining 4 bags had been found and would be collected soon.

“Residents must be worried about the environment, but there are no reports that the bags were broken, so there will be nothing to worry about once they have been recovered safely,” he said.

By Tuesday, transport was largely back to normal, though some flights were cancelled and train services partially disrupted where tracks or train stock were damaged by the storm.

A crunch fixture pitting the hosts against Scotland went ahead on Sunday night, October 13, with Japan winning its first-ever quarter final spot. – Rappler.com