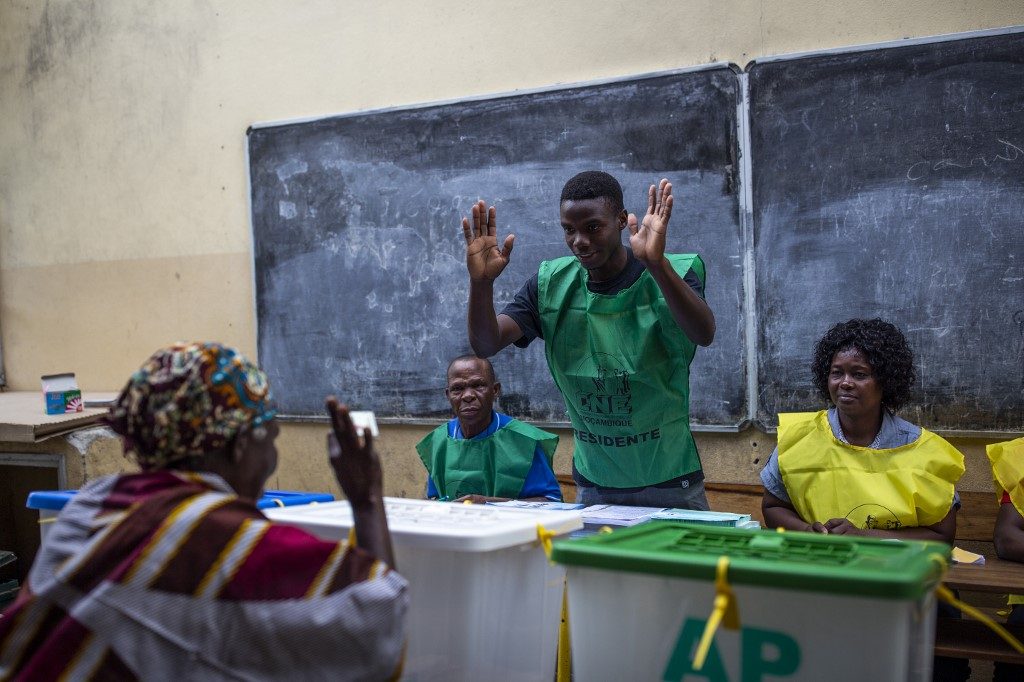 Facebook Twitter Copy URL
Copied
(UPDATED) 'Mozambique has chosen to move forward peacefully,' President Filipe Nyusi says, adding that more than more than 4,000 observers have been deployed in the most-watched election in the country's history

MAPUTO, Mozambique (UPDATED) – Mozambique began voting in a general election on Tuesday, October 15, that some fear could test the country’s fragile peace, after a heated campaign marred by violence and allegations of electoral fraud.

The Frelimo party, which has ruled the impoverished southern African nation since independence from Portugal in 1975, is widely expected to again beat its former civil war foe Renamo, a rebel group turned main opposition party.

President Filipe Nyusi, who cast his ballot at a school in the capital Maputo as polls opened at 7:00 am (0500 GMT), called on voters to show “the world we stand for democracy and tolerance.”

“Mozambique has chosen to move forward peacefully,” the Frelimo leader said, adding that more than more than 4,000 observers had been deployed in the most-watched election in the country’s history.

Opinion polls predict Nyusi, 60, will win a second five-year term, despite his popularity taking a hit from chronic unrest and a financial crisis linked to alleged state corruption.

Walter Carlitos Zucula, a 20-year-old student at a Maputo polling booth, said he would vote to reelect Nyusi.

“The development of our country is in our hands,” he said, adding that he wanted more jobs for young people.

Around 13 million of Mozambique’s 30 million citizens are registered to vote in elections for the presidency, parliament and provincial governors.

Balloting is take place at more than 20,000 polling stations, which close at 6:00 pm (1600 GMT). Preliminary results are expected to be announced on Thursday, October 17.

After 44 years at the helm, Frelimo will likely see its stranglehold on power loosen due to a deal with Renamo to allow voters to vote for provincial governors, who had previously been nominated by the government.

Renamo is predicted to take control of 3 to 5 of Mozambique’s 10 provinces, according to analysts.

“This election will be a test for democracy,” said Ericino de Salema of the Electoral Institute for Sustainable Democracy in Africa.

“For the first time, the political geography of the country may change substantially, it may even lead to confrontation.”

“If these results are manipulated we will never accept them, we do not want a return to the problems of the past,” Momade told the media after casting his vote.

Momade heads a party of former anti-communist rebels who fought a brutal civil war with Frelimo from 1975-1992, devastating the economy and leaving almost one million people dead.

Renamo picked up arms again from 2013 to 2016, but tensions continued until Nyusi and Momade sealed a peace deal in August.

But an armed breakaway faction of Renamo has rejected Momade’s candidacy and threatened to attack campaign events, raising fears the triple polls could be marred by bloodshed.

The six-week campaign was one of the most violent in the country’s turbulent history, with candidates threatened, election material destroyed, and deadly clashes breaking out between supporters.

The situation escalated last week when a prominent election observer was shot dead at the wheel of his car in the southeastern Gaza province by members of a special police unit.

The opposition has already accused Frelimo of tampering with the vote, and civil society groups have estimated there are hundreds of thousands of “ghost voters” – names on the electoral roll not aligned with real, potential voters.

“We definitely have some irregularities that put stains on the whole process,” said Hermenegildo Mulhovo of election monitoring group Sala da Paz.

Lutero Simango, an MP of the country’s third biggest party MDM, accused Frelimo of “using all state means, including police and secret services, to intimidate people.”

Frelimo suffered its worst result at the ballot box – 51.8% – in local elections last year and has been severely weakened in recent years.

In 2016 it was revealed the government secretly borrowed $2 billion, sparking the worst financial crisis in the country’s history and uncovering a vast corruption network with links to the regime.

The government is also battling to recover from two devastating cyclones in March which displaced nearly two million people.

And a shadowy jihadist insurgency that has killed hundreds in the northernmost Cabo Delgado province has delayed development of one of the government’s biggest selling points – the discovery of vast gas reserves that is hoped to put billions in state coffers and lift millions out of poverty.