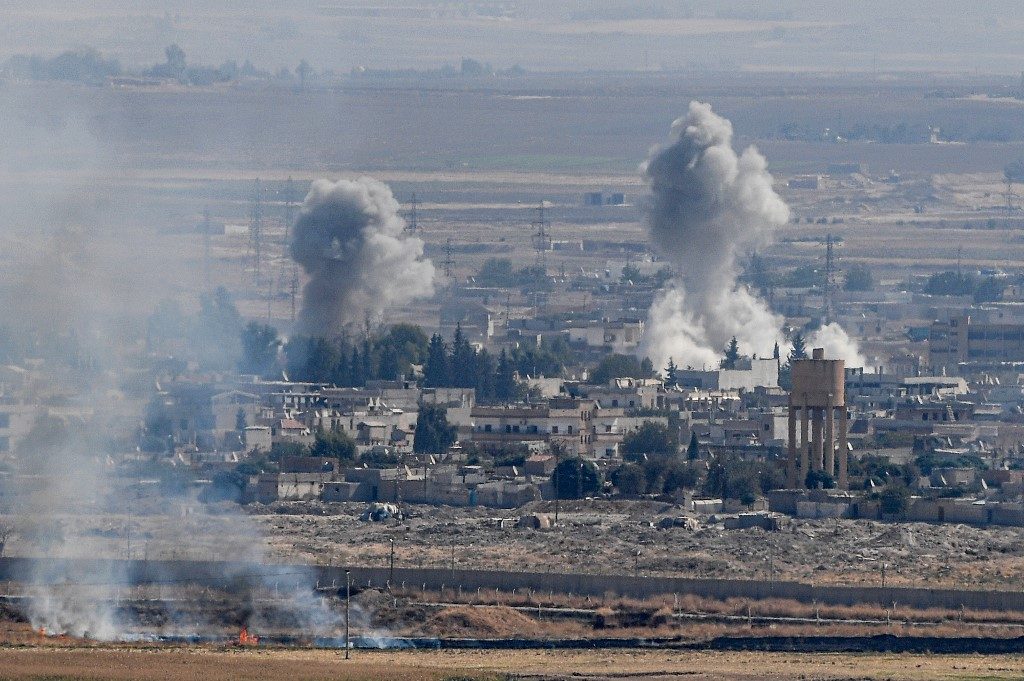 The United States slapped sanctions on its NATO ally in a bid to stop an assault that its own troop withdrawal triggered, but Ankara showed no sign of relenting. (READ: Syria regime steps in to halt Turkish assault on Kurds)

Syria’s regime dispatched more troops to the northeast to contain Ankara’s advance – their most significant deployment in the Kurdish-controlled region since they started withdrawing from the area in 2012.

It follows a deal clinched Sunday, October 13, between Damascus and the Kurds that saw government troops raise the Syrian flag in the flashpoint northern city of Manbij on Tuesday, after US forces pulled out.

Regime troops had entered the city near the border on Monday night, October 14, as pro-Turkey fighters massed to the west ahead of a planned assault.

Kurdish combatants from the Syrian Democratic Forces (SDF) are battling Turkish forces and their Syrian proxies – mostly former rebels paid and equipped by Ankara – in various parts of the northeast.

East of Manbij, the Kurds are mounting a desperate defense in the border town of Ras al-Ain, using a dense network of tunnels, berms and trenches.

They launched “a large counterattack against Turkish forces and their Syrian proxies near Ras al-Ain,” the Britain-based Syrian Observatory for Human Rights said.

An Agence France-Presse correspondent in the area said clashes around the town continued on Tuesday, despite repeated claims by Ankara in recent days that it had captured the area.

Since launching their assault on October 9, Turkish-backed forces have secured more than 100 kilometers (60 miles) of border, but Ras al-Ain, which the Kurds call Siri Kani, has held out.

President Donald Trump announced a pullback of US forces from the border last week, a move which was widely interpreted as green-lighting a long-planned Turkish invasion.

Politically embattled at home, Turkish President Recep Tayyip Erdogan wants to create a 30 kilometer (20 mile) deep buffer zone on the Syrian side of the long border.

He wants to keep the SDF at bay – Ankara considers them a terrorist group because of their links with the main Kurdish insurgency in Turkey – and create a resettlement area for some of the 3.6 million Syrian refugees on Turkish soil.

The offensive has left dozens of civilians dead, mostly on the Kurdish side, and displaced at least 160,000 people.

Aid groups, which have warned of a new humanitarian disaster in Syria’s eight-year-old war, have been forced to pull out of the conflict zone, Kurdish authorities said.

Trump, who is campaigning for reelection but faces impeachment, is keen to deliver on a promise of pulling US troops out of the Syria quagmire.

More than 1,000 troops are now being withdrawn from northern Syria and the United States will keep only a residual contingent of around 150 in the south at the Al-Tanf base near the borders with Jordan and Iraq.

On Tuesday, the Russian defense ministry said US troops have left bases near Manbij and the Syrian army “has full control” over the former Islamic State group stronghold.

The US-led coalition confirmed the withdrawal, saying: “We are out of Manbij.”

US troops had been based in the city since they helped Kurdish fighters seize it from ISIS in 2016.

In a bid to force Turkey’s hand, Washington slapped sanctions on its defense, interior and energy ministers, freezing their US assets and making US transactions with them a crime.

“I am fully prepared to swiftly destroy Turkey’s economy if Turkish leaders continue down this dangerous and destructive path,” said Trump, who until recently had touted his friendship with Erdogan.

Abandoned by the US, their chief ally in years of battles against ISIS that cost the lives of 11,000 of their fighters, the Kurds turned to Damascus.

European governments in particular are worried that the chaos in the area could lead to mass breakouts by thousands of ISIS fighters detained by Kurdish forces.

They have warned this would lead to a resurgence of the jihadist organization and increase the risk that some of them might return to Europe to plan and conduct terror attacks.

The SDF have warned that their fighters were mobilized to defend against the Turkish advance and not available to fully guard ISIS prisoners.

That has already resulted in the escape of hundreds of foreign fighters’ relatives, although Trump suggested the SDF may have deliberately let them go to gain leverage.

Human Rights Watch warned European countries against attempts to have their detained nationals transferred en masse to Iraq for prosecution.

The watchdog warned it would be illegal for these countries to send nationals to stand trial in a country where they risk execution and where due process is consistently violated.

A European diplomatic source said France was discussing a transfer with Iraqi officials on Tuesday. – Rappler.com