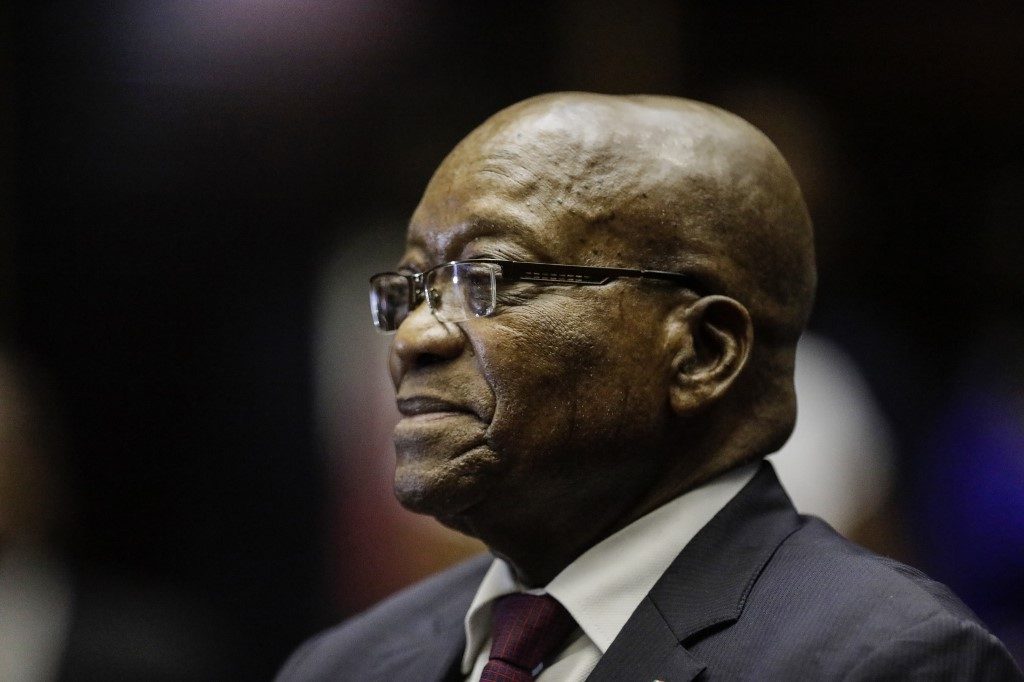 Facebook Twitter Copy URL
Copied
Jacob Zuma's last-minute appeal will delay the case over bribery allegations dating back to a 1990s arms deal. He dismisses the charges as a conspiracy.

Zuma’s last-minute appeal will delay the case over bribery allegations dating back to a 1990s arms deal. He dismissed the charges as a conspiracy.

The trial would be the first time Zuma faced a court on graft charges, despite a string of accusations over his long political career.

The High Court in the southeastern city of Pietermaritzburg last week rejected his request to have charges of fraud, graft and racketeering dismissed, clearing the way for the trial to start on Tuesday.

But Zuma’s lawyer Thabani Masuku told the court at the start of the trial that the ex-president would appeal, dragging on a case that has seen numerous legal twists over 15 years.

“Mr Zuma would like to exercise the full extent of his constitutional rights, which includes the right to appeal,” Masuku said.

Outside the court, Zuma told a small crowd of supporters that “there have been many conspirators against me.”

“There is no justice that will be served by continuing with this case,” he told the crowd in Zulu.

He was forced to resign as president last year by the ruling African National Congress (ANC) party after a nine-year reign marred by corruption allegations and dwindling popularity.

He is accused of taking bribes worth 4 million rand ($270,000) before he became president from a 51-billion-rand ($3.4-billion) 1999 arms purchase by 5 European firms, including French defense company Thales.

Both Zuma and Thales, which is accused of paying the bribes and was also to stand trial, deny the charges.

The appeal will be heard on November 22, and proceedings are scheduled to resume on the provisional date of February 4.

Clad in the ANC’s green, black and yellow, the crowd outside the court chanted Zuma’s name and waved party flags as he took to the stage.

Ntombizodwa Khumalo, a 65-year-old pensioner outside the court, said “we miss having Zuma as our president.”

“It’s clear there is a vendetta against the man.”

State lawyer Billy Downer told the court that the prosecution believed the appeal would fail.

“We don’t think that there is a reasonable prospect of success” for the appeal, he said.

Downer said the prosecution wanted the trial to start as soon as possible. Legal analysts have cast doubt on whether that would have been possible given the size of the case, predicting the trial would have been delayed regardless of the appeal.

The defense team of Zuma, who has claimed he is so broke he had to sell his socks to raise legal fees, maintained that the ex-president had been ready for trial for 14 years.

Zuma faces 16 charges of fraud, graft and racketeering related to the purchase of fighter jets, patrol boats and military equipment when he was deputy president to the country’s second black president Thabo Mbeki.

Critics have dubbed Zuma the “Teflon president” for his reputed ability to evade judicial reckoning.

Analysts have warned that if Zuma goes on trial, he will drag down with him many leaders of Nelson Mandela’s ANC, which has governed the country since the end of apartheid in 1994.

Zuma has also been accused of organizing the systematic plunder of government coffers in a scandal known as “state capture.”

He appeared at an inquiry into the scandal in July, putting on a defiant performance and denying all wrongdoing.

“I have been vilified, alleged to be the king of corrupt people,” he said, adding that he had been the victim of “character assassination over 20 years.”

High on the list of alleged benefactors is the wealthy Indian-born Gupta business family.

They were accused of unfairly obtaining lucrative government contracts and even influencing Zuma’s ministerial appointments.

Ramaphosa has vowed to tackle deep-seated corruption but faces opposition from powerful senior ANC members, many of whom remain Zuma allies.

“Zuma was in charge for nearly two terms but did very little for us ordinary people,” Sakhile Dube, a 30-year-old clothes seller, told Agence France-Presse outside the Pietermaritzburg court.

“We are still waiting to see if Ramaphosa can assist us and remedy the situation,” he added. – Rappler.com