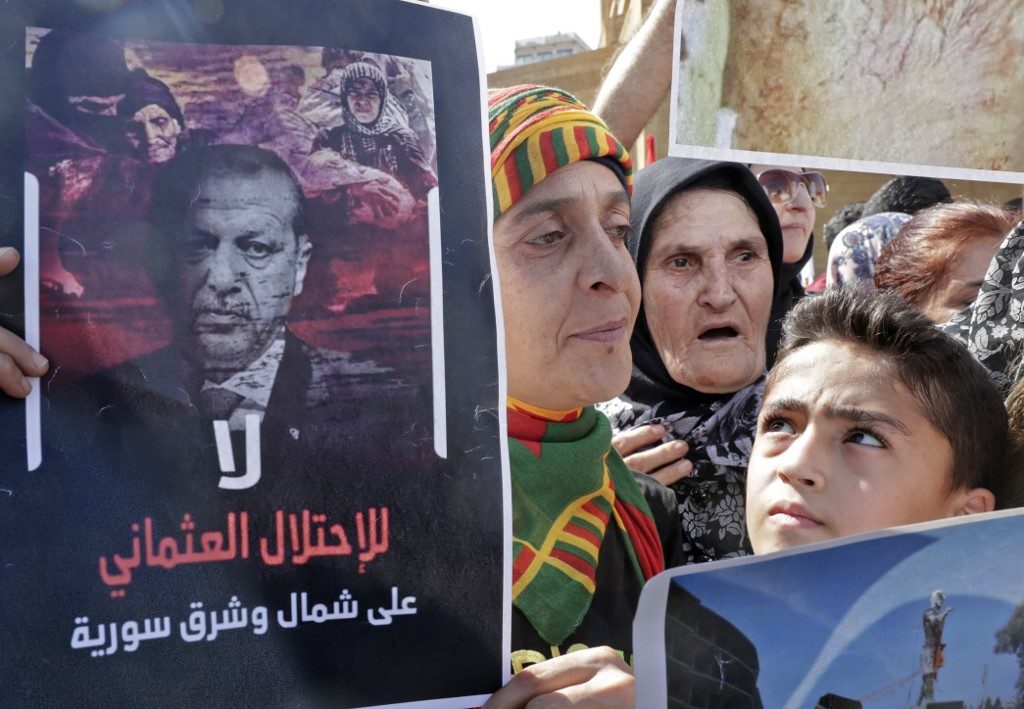 CEYLANPINAR, Turkey (UPDATED) – Turkey rebuffed international pressure to curb its military offensive against Kurdish militants in Syria on Wednesday, October 16, as US President Donald Trump dispatched his deputy Mike Pence to Ankara to demand a ceasefire.

Turkish President Recep Tayyip Erdogan rejected any negotiations, telling parliament the only way to solve Syria’s problems was for the Kurdish forces to “lay down their arms… destroy all their traps and get out of the safe zone that we have designated.”

Battles raged in the key Syrian border town of Ras al-Ain on Wednesday, with Kurdish fighters burning tires in a bid to blind Ankara’s warplanes and digging in against a ground offensive by Turkish-backed Syrian rebels.

The operation, now in its second week, has triggered a flurry of diplomacy among major powers.

Trump sent Pence along with his top diplomat Mike Pompeo to Turkey amid the greatest crisis in relations for decades between the NATO allies.

Moscow has stepped into the void left by Trump’s withdrawal of US troops from northern Syria, deploying patrols to prevent clashes between Syrian and Turkish forces.

Russian TV showed its forces alongside Syrian government troops taking up positions in and around the town of Manbij following the US pull-back.

The Kremlin said it would host Erdogan for a meeting with his Russian counterpart Vladimir Putin in the coming days, to ensure the operation does not turn into all-out war between Turkey and Syria.

Trump – facing mounting criticism in Washington over his decision to pull 1,000 troops out of the conflict zone, as well as an unrelated impeachment inquiry – has hit back at Erdogan, slapping sanctions on three cabinet officials and raising tariffs on Turkish steel.

Pence’s office released a statement that he would meet Erdogan on Thursday and “voice the United States’ commitment to reach an immediate ceasefire and the conditions for a negotiated settlement”.

He reiterated that Trump will pursue “punishing economic sanctions” until a resolution is reached.

There was confusion after Erdogan told reporters he would not meet with Pence – a position that was later reversed by his office.

The operation has widespread support in Turkey, where decades of bloody insurgency by Kurdish militants have killed tens of thousands of people.

But Western powers fear it will endanger the battle against the Islamic State group, which was led on the ground by Kurdish forces. Thousands of IS prisoners are held in Kurdish-run camps in the region.

French Foreign Minister Jean-Yves Le Drian said Wednesday that the camps were not “currently” under threat from the operation, but Europe has taken an increasingly tough line with Turkey.

Britain and Spain became the latest powers to suspend military exports to Turkey on Tuesday. Canada made a similar move.

The Kurdish-led Syrian Democratic Forces (SDF) have mounted a desperate defence to the east of Ras al-Ain, using tunnels, berms and trenches.

A Syrian fighter serving alongside Ankara’s forces said his forces were trying to cut Kurdish supply lines from nearby Hassakeh to facilitate their advance on the town.

Since launching their assault on October 9, Turkey and its Syrian rebel proxies have secured more than 100 kilometres (60 miles) of border, but Ras al-Ain – Siri Kani in Kurdish – has held out.

Erdogan, who like Trump faces political difficulties at home, wants to create a buffer zone stretching 30 kilometers (20 miles) from the border into Syrian territory.

He wants to destroy Kurdish hopes of an autonomous enclave that could serve as a launching pad for attacks in Turkey, and to resettle some of the 3.6 million Syrian refugees Ankara is hosting.

“God willing, we will quickly secure the region stretching from Manbij to our border with Iraq,” Erdogan said.

The offensive has left dozens of civilians dead, mostly on the Kurdish side, and displaced at least 160,000 people. – Rappler.com