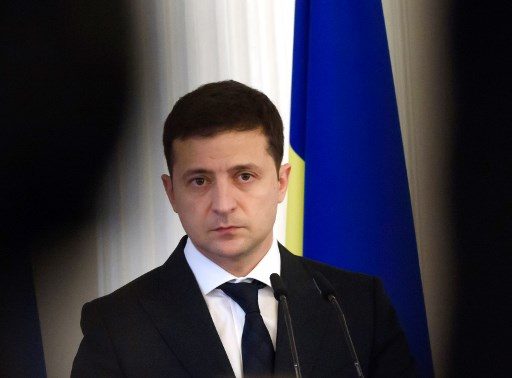 Facebook Twitter Copy URL
Copied
'As the president of Ukraine, I won't interfere with events in other countries, unlike some others [who] may try [to],' says President Volodymyr Zelensky

RIGA, Latvia – President Volodymyr Zelensky said Wednesday, October 16, that Ukraine “will do nothing” in connection with the impeachment probe against Donald Trump over allegations the US president tried to force Kiev to investigate his political rival Joe Biden.

“As the president of Ukraine, I won’t interfere with events in other countries, unlike some others [who] may try [to],” Zelensky told Agence France-Presse as he met the Ukrainian diaspora in the Latvian capital Riga.

The leader of the impeachment investigation said Tuesday, October 15, that witnesses had provided substantial support for allegations that he illegally tried to force Ukraine to investigate Biden.

While the White House and Trump’s personal lawyer Rudy Giuliani refused to turn over subpoenaed documents on the Ukraine affair to Congress, House Intelligence Committee Chairman Adam Schiff said 5 witnesses had backed up allegations of misuse of power that could underpin formal impeachment charges.

Witnesses have said Trump’s July 25 phone call with Zelensky, in which he appeared to tie US military aid to getting dirt on Biden, was planned in advance and then followed up, Schiff said.

Meanwhile on Twitter, Trump lashed out at lawmakers, saying “Democrats are allowing no transparency at the Witch Hunt hearings.”

Democrats are seeking to prove Trump sought foreign aid to boost his reelection next year, violating US election laws.

Trump has admitted asking Zelensky for help to probe Biden, but said it was for legitimate suspicions of corruption and not political reasons. – Rappler.com