China signs deal to ‘lease’ Tulagi island in the Solomons

Facebook Twitter Copy URL
Copied
(UPDATED) The leaked papers reveal the Solomons' Central Province made a 'strategic cooperation agreement' on Tulagi island, which has a natural deep water harbor, with the China Sam Group on September 22

HONIARA, Solomon Islands (UPDATED) – A Chinese company signed an agreement to lease an entire island in the Solomon Islands a day after Beijing recruited the Pacific nation as its latest ally in the strategically important region, according to documents obtained by AFP Thursday, October 17.

The leaked papers reveal that the Solomons’ Central Province made a “strategic cooperation agreement” on Tulagi island, which has the type of deep-water harbor coveted by the military, with the state-owned China Sam Group on September 22.

A day previously, China and the Solomons officially established diplomatic relations after Beijing persuaded the impoverished Pacific nation to sever ties with arch-rival Taiwan and become its ally.

Tulagi, an island about two square kilometers (0.8 square miles) with a population of 1,200, is the site of a former Japanese naval base and was the scene of fierce fighting in World War II.

The agreement with China Sam mentions developing a refinery on the island, but its potential for dual use as a Chinese military base is certain to raise concerns with the United States and Australia.

“Party A (Central Province) is willing to first lease the whole Tulagi island and the surrounding islands to Party B (China Sam) for the development of the special economic zone,” the agreement says.

It goes on to say the deal covers “any other industry that is suitable for development, including oil and gas development.”

China Sam said in a statement issued Thursday that it was committed to cooperating with the Solomons in a number of areas, including trade, infrastructure, fisheries and tourism. 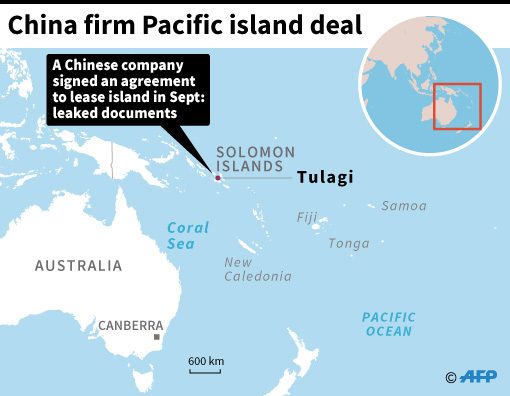 Jonathan Pryke, director of Sydney-based foreign policy think tank the Lowy Institute’s Pacific programme, said it was not unusual for China to promise such special economic zones to developing nations that were desperate for investment.

“The fear is that these zones can in turn create enclaves of Chinese operations that could then grow over time into some kind of permanent strategic facility,” he told AFP.

“The island in question in Solomon Islands has deep water anchorage so could have such strategic uses down the road.”

Taiwan was previously the Solomons’ largest ally in the Pacific region and the decision to ditch it for China after months of speculation was seen as a major diplomatic coup for Beijing.

Days later another Taipei loyalist in the region, Kiribati, did likewise.

The maneuvering left Taiwan with just four nations that officially recognise it in the Pacific and 15 worldwide, while also alarming traditional western democratic powers.

The Pacific has long been a proxy battleground for Taiwan and China, with local leaders adept at playing one against the other for financial gain.

China has become more assertive in the Pacific as its economic might has grown and sees Taiwan as a renegade state which will eventually be unified with the mainland, by force if necessary.

Other regional heavyweights, particularly Australia, fear Beijing’s ultimate aim is to set up a naval base in the Pacific which would dramatically increase its military footprint in the area.

Such a move would potentially negate the geographic remoteness that provides Australia and New Zealand with a valuable defence buffer.

However, China Sam’s arrangement with Central Province may count for little as it has not been approved by the central government in Honiara.

Central’s Premier Stanley Manetiva played down its impacts in an interview with Radio New Zealand.

“To be honest here, leasing Tulagi will not be possible,” he said. “Nothing will eventuate on the agreement.”

Whether or not the deal goes ahead, the Lowy Institute’s Pryke said the diplomatic upheavals between China and Taiwan were affecting good governance in the region.

“Corruption by its very nature is hard to quantify and systems of patronage were alive and well in the Pacific long before this new wave of Chinese engagement,” he said.

“But this new Chinese engagement is certainly happening in a hurry, and it is most definitely making corruption in the Pacific worse.” – Rappler.com