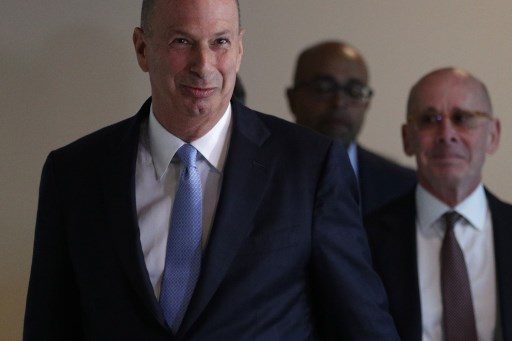 WASHINGTON DC, USA – A US diplomat told Congress Thursday, October 17, that President Donald Trump and his personal lawyer injected domestic politics into talks with Ukraine, including seeking a probe of a Ukrainian company with ties to the son of Trump’s Democratic rival Joe Biden.

US Ambassador to the EU Gordon Sondland told congressional committees conducting an impeachment inquiry that Trump ordered diplomats in May to involve his personal lawyer Rudy Giuliani in talks between Washington and the new administration of President Volodymyr Zelensky.

Trump and Giuliani are accused of linking US military aid to Ukraine to Zelensky’s agreement to open an investigation into Biden and his son Hunter, as well as whether Ukraine was involved in meddling on behalf of Democrats in the 2016 US election – a popular but widely discredited conspiracy theory.

“Mr. Giuliani emphasized that the president wanted a public statement from President Zelensky committing Ukraine to look into anticorruption issues,” Sondland said in a prepared statement.

“I did not understand, until much later, that Mr. Giuliani’s agenda might have also included an effort to prompt the Ukrainians to investigate Vice President Biden or his son or to involve Ukrainians, directly or indirectly, in the President’s 2020 reelection campaign,” he said.

“Mr. Giuliani specifically mentioned the 2016 election (including the DNC server) and Burisma as two anti-corruption investigatory topics of importance for the President,” Sondland said.

Biden’s son Hunter had a seat on the board of Burisma, a powerful Ukraine energy group, for 5 years until April 2019.

Sondland, a businessman who was appointed ambassador after donating $1 million to Trump’s inauguration festivities, sought in testimony to distance himself from the political storm enveloping the White House as Trump faces possible impeachment.

“We were also disappointed by the president’s direction that we involve Mr. Giuliani,” Sondland said.

“Our view was that the men and women of the State Department, not the president’s personal lawyer, should take responsibility for all aspects of US foreign policy towards Ukraine.” – Rappler.com