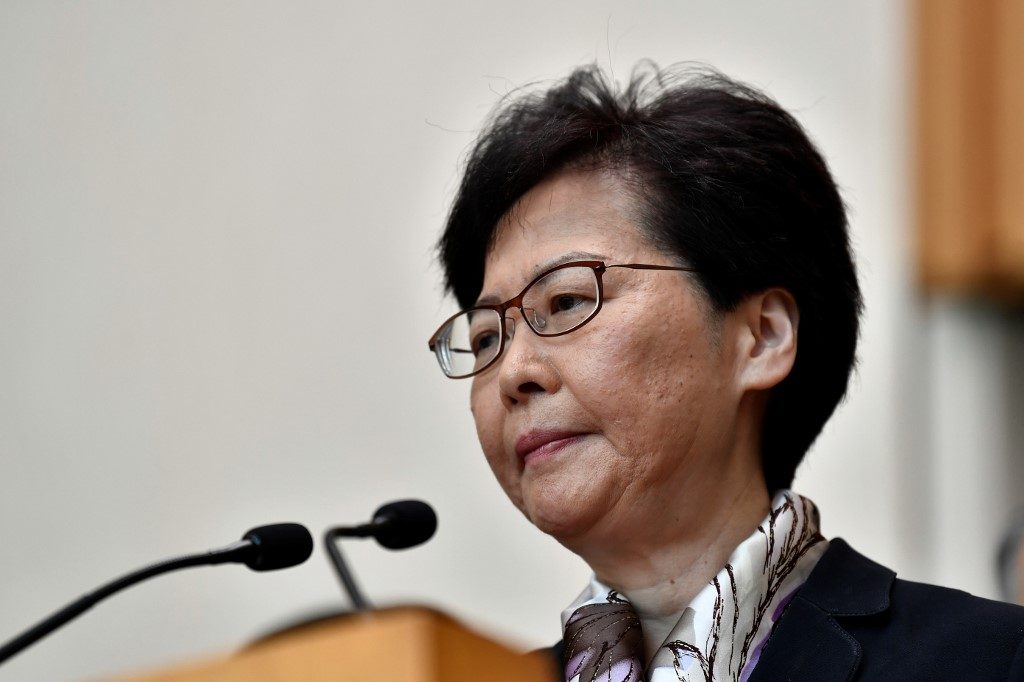 The pro-Beijing leader has faced sustained criticism from protesters in the semi-autonomous city.

So far, the Chinese central government has given its support to her and the Hong Kong police, calling the demonstrators “rioters” and condemning the violence.

But according to the FT report, which quoted unnamed figures briefed on the deliberations, Beijing is drawing up a plan to replace her with an interim chief executive.

However, sources told the newspaper that the plan would be dependent on the situation in the city first stabilizing so that Beijing is not seen as giving in to violence.

Lam’s office said it would not comment on speculation.

Hong Kong has been battered by 20 weeks of protests and with no political solution in sight, clashes have intensified each month.

Earlier this month, Lam – who has refused to grant any major concessions to protesters – invoked a colonial-era emergency law to ban face masks, setting off a new wave of protests and vandalism that shut down much of the city’s transport network.

One of the protest leaders, Jimmy Sham, was hospitalised after being attacked by unknown assailants wielding hammers last week.

If President Xi Jinping decides to go ahead with the plan to remove Lam, the report said her replacement would be installed by March.

Leading candidates being considered to replace her reportedly include Norman Chan, former head of the Hong Kong Monetary Authority, and Henry Tang, who has also served as the territory’s financial secretary and chief secretary for administration.

Tang said in a statement that he supported Lam, and would not comment on speculation.

Lam’s ouster may not be enough to allay the concerns of Hong Kong’s protesters.

“The plan definitely has come too late as Carrie Lam’s net support… dropped to a disastrous level as early as 4 months ago,” said political analyst Dixon Sing.

“It is impossible to believe that Hong Kong people… would be happy and go back home once Carrie Lam has stepped down.”

A leaked audio recording emerged in September of Lam saying she would quit if she had a choice – although she later said she had not contemplated standing down.

Her resignation is not one of the protesters’ five central demands, who are instead calling for measures including an investigation into police brutality, universal suffrage and the release of arrested protesters without charge.

“If the government can respond to the 5 demands, I believe Hong Kongers would stop (the protests).”

Lam has faced a series of political difficulties since the city’s legislature returned for a new session last week.

She was unable to give her State of the Union-style policy speech after pro-democracy lawmakers repeatedly interrupted her, forcing her to deliver the address via video.

“I don’t think a change in chief executive will have much impact on the profound political crisis that Hong Kong is facing,” said Ben Bland, director of the Southeast Asia Project at the Lowy Institute, a policy think tank.

“The problem is less who leads Hong Kong and more that its leaders have no popular legitimacy because they are effectively chosen by Beijing.” – Rappler.com