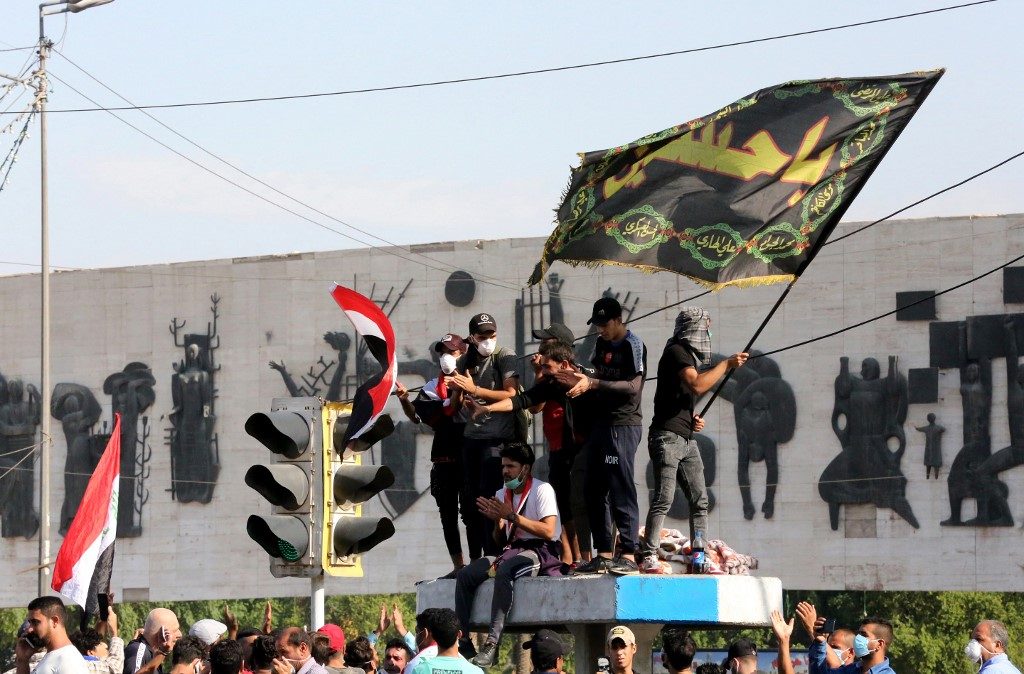 The capital and country’s south have been rocked by a second wave of demonstrations since Thursday, with protesters digging in despite tear gas, curfews and violence that has left over 60 dead.

On Sunday morning, students could be seen joining demonstrations in the capital, with activists saying about a dozen schools and universities had decided to shut their doors and take part in protests en masse.

In the emblematic Tahrir Square, young girls in school uniforms with rucksacks were seen trekking through streets littered with tear gas canisters.

Hundreds of protesters had hunkered down in the square, defying heavy tear gas use overnight and pledging to “weed out” the political class.

“We’re here to bring down the whole government – to weed them all out!” one protester said, the Iraqi tricolor wrapped around his head.

The protests are unprecedented in recent Iraqi history for their ire at the entire political class, including Abdel Mahdi, parliament speaker Mohammed Al-Halbussi and even traditionally revered religious leaders.

They have also been exceptionally violent, with 157 dead in the first set of rallies and 63 dead in the latest round.

“We don’t want a single one of them. Not Halbussi, not Abdel Mahdi. We want to bring down the regime,” the protester said.

Women were also seen in larger numbers, including a young nurse who said she was protesting “for the generation that’s coming.”

“Our generation is psychologically tired, but it’s alright as long as this is for the next one,” she said.

This week’s protests are the sequel to 6 days of anti-government rallies that erupted on October 1 in outrage at corruption, unemployment and poor services.

Oil-rich Iraq is the OPEC oil cartel’s second biggest producer, but one in 5 people live in poverty and youth unemployment stands at 25 percent, according to the World Bank.

In response to the rallies, Abdel Mahdi proposed a laundry list of reforms including hiring drives, increased pensions and promises to root out corruption.

But Iraqis hit the streets once again this week, and Abdel Mahdi now faces escalated pressure from parliament.

The body failed to reach quorum for a scheduled session on Saturday to discuss protester demands.

Later on that evening, its largest bloc announced it would hold an open-ended sit-in to back the rallies.

Saeroon – an alliance between populist cleric Moqtada al-Sadr and Iraq’s Communist Party – said it now considered itself part of the political opposition.

“The sit-in is ongoing and open until protester demands are met and the reforms promised by the PM are enacted,” Saeroon MP Salam al-Hadi told Agence France-Presse (AFP) from within parliament.

The move has put Abdel Mahdi under more pressure than ever, as Saeroon was one of the two main sponsors of his government.

The other was Fatah, the political arm of the Hashed al-Shaabi paramilitary force which said it would continue to back the central government.

The one-time allies now find themselves on opposite sides of the protest movement.

The Hashed was founded in 2014 to fight the Islamic State group but its factions have since been ordered to incorporate into the state security services.

Several of their offices have been torched in recent days in southern Iraqi cities, hinting at a new violent phase.

Several dozen protesters have died while storming or setting fire to the offices of Asaib Ahl al-Haq, the Badr Organization and others, according to medics and police.

Top Hashed commanders have threatened revenge, denouncing the attacks as sowing “discord and chaos” in the country.

The United Nations has said it fears “armed spoilers” could derail efforts at peaceful protests in Iraq and said it was “tragic” to see renewed violence in the country. (READ: Top Iraq cleric says government responsible for protest deaths)

Since October 1, at least 220 people have died in the capital and the south, according to official sources.

A government probe found “excessive force” was used to quell the first week of protests, and in a noticeable change, there have been no reports of live ammunition in Baghdad in recent days.

Most of those killed since Thursday have been in the Shiite-majority south, but medics and protesters have reported trauma wounds from tear gas canisters unleashed into crowds in the capital.

On Sunday, security forces were positioned on the edges of Tahrir, while elite Counter-Terrorism Service troops and armored vehicles were seen in surrounding districts.

The CTS said it had deployed its units to “protect vital infrastructure,” and its forces were not seen in Tahrir. – Rappler.com