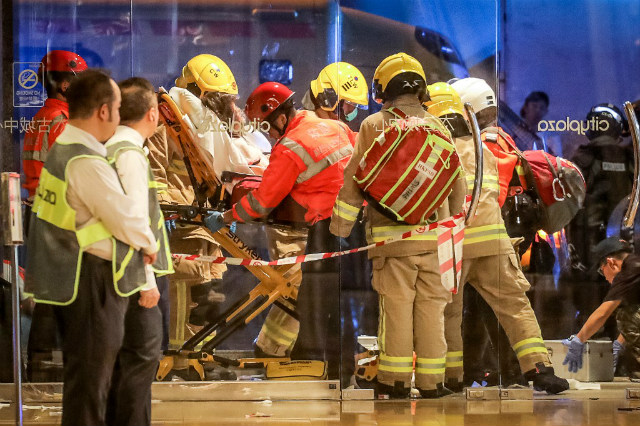 HONG KONG – A bloody knife fight in Hong Kong left 6 people wounded on Sunday evening, November 3, including a local pro-democracy politician who had his ear bitten off, capping another chaotic day of political unrest in the city.

The violence was less sustained than Saturday, November 2, when police and protesters fought hours of cat and mouse battles after thousands took the streets for an unsanctioned march.

But the day ended with a brutal fight taking place outside a shopping mall in Tai Koo Shing, a middle-class neighbourhood on the main island where protesters had gathered for much of the afternoon.

Live broadcasts showed Andrew Chiu, a local pro-democracy councillor, with much of one ear severed.

A second man was unconscious in a growing pool of blood as bystanders desperately tried to stem wounds to his back.

Another man in a grey t-shirt had been beaten bloody by the crowd who accused him of carrying out the attack and wounding multiple people.

RTHK news, which filmed the brawl, reported that the attacker was a Mandarin speaker – the predominant language on the Chinese mainland – and had been arguing with his victims about politics before he pulled out a knife.

He bit off Chiu’s ear when the councillor tried to tackle him after the assault. A knife could also be seen lying on the floor outside the mall where the fight took place.

Police told Agence France-Presse that 6 people in total were wounded – 4 men and two women – and that 3 were arrested, without giving further details.

Hong Kong has been upended by the huge, often violent, pro-democracy protests which have battered the financial hub’s reputation for stability and helped plunge the city into recession.

Police are firing ever increasing rounds of tear gas and rubber bullets against small groups of hardcore protesters who have embraced throwing petrol bombs as well as vandalizing pro-China businesses.

With the city desperately polarised, street fights have broken out on both sides of the ideological divide with growing frequency.

Beijing supporters have attacked opponents throughout the summer, often in targeted assaults against prominent government critics and opposition politicians.

Beijing has shown no willingness to meet demonstrators demands for greater democratic freedoms and police accountability – and activists show no sign of leaving the streets with 22 consecutive weekends of unrest.

This summer’s first protests in which millions marched were sparked by a now-abandoned attempt to allow extraditions to the mainland.

But as Beijing took a hardline the movement snowballed.

Protesters are demanding an inquiry into the police, an amnesty for those arrested and fully free elections. – Rappler.com