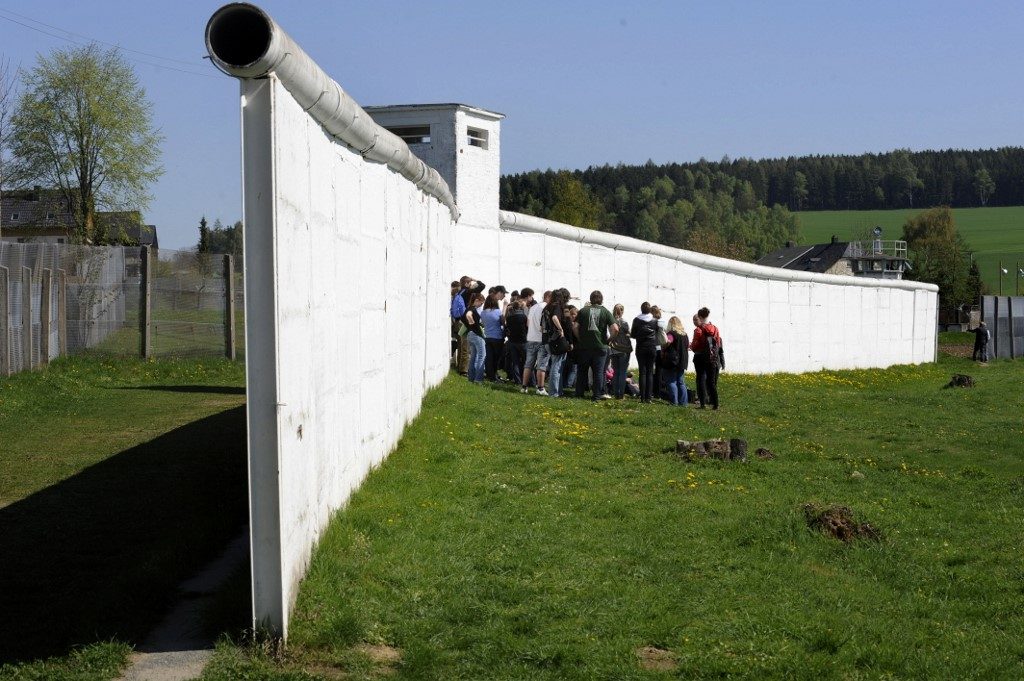 Facebook Twitter Copy URL
Copied
Thirty years after the fact, a debate rages on: Was the sudden demise of the Berlin Wall, a prelude to that of the entire communist bloc, an accident of history, a slip of the tongue?

BERLIN, Germany – Guenter Schabowski scratches his head, puts on his glasses, hesitates, then fumbles with his handwritten notes.

He seems to be trying to understand what he is reading and haltingly responds to a question about when a measure giving East Germans more freedom to travel would take effect: “As far as I know… as of now.”

A member of the Politburo of East Germany’s communist party, and its spokesman, this member of the inner ruling circle of the “workers’ and peasants’ state”, as the German Democratic Republic was known, just announced to a few flabbergasted journalists the fall of the Berlin Wall. (READ: Race to remember Berlin Wall victims, 30 years on)

He seems to do it by accident, at the end of a press conference and in response to questions about the new rules for East German citizens leaving the country.

There was no going back.

But 30 years after the fact, the debate is still raging: was the sudden demise of the Berlin Wall, a prelude to that of the entire communist bloc, an accident of history, a slip of the tongue?

Was it the result of a misunderstanding in the communist hierarchy, caught flat-footed by events, or a calculated gesture by the East German dictatorship which had reached the end of the line?

In the corridors of power in East Berlin, inside the opulent villas in the leafy northern suburb of Wandlitz which the apparatchiks called home, the mood has been on a knife-edge for weeks. How to salvage the situation?

The East German population, trapped behind the Iron Curtain since 1961, is “voting with its feet”. Since August 1989, Hungary and Czechoslovakia have been turning a blind eye to a flood of refugees escaping the east for West Germany.

Meanwhile since early September, hundreds of thousands of East Germans have taken to city streets to protest each week, chanting against the regime “We are the people!” and “We want to leave!”.

The crisis has reached the tipping point. And the GDR can no longer count on the Soviet big brother to intervene.

In Moscow, the tone has changed and Mikhail Gorbachev is speaking of “perestroika” (change or reform) and “glasnost” (openness, transparency).

The Soviet leader had only just warned East German strongman Erich Honecker in early October that “life punishes those who are too late.”

A few days later, on October 18, Honecker, who had applauded China for “crushing the counter-revolutionary uprising” in Tiananmen Square, was gone, making way for Egon Krenz.

Presented as a relative moderate, Krenz intends to shore up the GDR with a few reforms, notably a liberalisation of travel with the granting of an exit visa without any preconditions.

Against this backdrop, Guenter Schabowski is entrusted on the evening of November 9, 1989 with the mission of announcing live on television the measures decided the same day by a small committee.

From there, the versions of events vary.

Krenz still resents Schabowski, whom he accuses of having plunged the GDR “into a difficult situation” by proclaiming the immediate entry into force of the chance to leave the country.

The fall of the Berlin Wall “was the worst night of my life,” Krenz told the BBC in an interview, something he “wouldn’t want to experience ever again”.

Schabowski should have, according to Krenz, stuck to a press release drawn up announcing the liberalisation of travel starting the next morning.

The idea was to allow controlled departures with a mandatory visa and to maintain border infrastructure, not to rip down the Wall overnight, and with it the GDR.

So was it an error of judgement in the line of fire? Or an audacious, intentional move? Until his death in 2015 at 86, Schabowski never clearly answered the question.  (READ: The man who opened the Berlin Wall)

“No one could have stopped the movement that was touched off by my announcement,” he would say later, casting himself as an ardent reformer.

According to his version of events, the opening of the borders was pushed through by a vanguard of proponents of change against the wishes of the party’s central committee, dominated by Stalinist die-hards.

“We came to the conclusion that if we wanted to save the GDR, we had to let the people who wanted to flee leave,” Schabowski told the daily TAZ in 2009.

The former East German dissident and later speaker of the Bundestag lower house of parliament, Wolfgang Thierse, however is convinced that Schabowski never grasped the full impact of his announcement.

“I don’t think he knew what was going to happen,” he told public radio.

“We suspected that something was being prepared for freedom of travel because the communist party wanted to lift the lid to decrease the pressure. But Schabowski did not have an inkling that he was going to set everything off.”

The ensuing events turned the tide in East Germany after more than 40 years of Cold War.

After having heard the message on the radio, on television or by word of mouth, East Germans streamed in their thousands throughout the night to the border crossings.

Cautious at first, then incredulous, they grew emboldened by the West Berliners who were already cheering them on from the other side of the Wall.

In the face of the swelling crowd, the barriers were soon wide open, starting in Berlin at Bornholmer Strasse.

Among the slack-jawed East Berliners who made their way toward the west from that border crossing that night was a certain Angela Merkel.

She lived in a small flat nearby and had kept her weekly date for the sauna before emerging to savor her first taste of freedom.

“We were just speechless and happy,” she would tell public broadcaster ARD.

The chemistry researcher at the GDR Academy of Sciences modestly celebrated the evening by drinking “a can of beer” with friends in the west, before returning home at a reasonable hour.

“The welcome in West Berlin was so warm,” the future chancellor recalled to the daily Frankfurter Rundschau.

Further border crossings opened and the armed guards, overtaken by events and without orders from the party, stopped performing their official duties and the police withdrew.

“We are as lost as you are,” a border guard tells a Berlin woman.

At the Bundestag in the “provisional” West German capital in Bonn, deputies by around 8:00 pm have begun to grasp the scope of the epochal earthquake.

They interrupt their session and spontaneously break into a chorus of the national anthem.

Former chancellor Willy Brandt, father of the Ostpolitik of rapprochement with the east, has tears in his eyes.

“The Berlin Wall no longer divides anything,” AFP wrote that night, its reporters moved by their chance to witness history in the making.

On that night of dreams, Berliners from East and West climbed atop the hated Wall in front of the Brandenburg Gate and danced to freedom and the “end of history”.

The jubilant images of Germans reuniting in tears circled the globe. Everyone seemed to have a variant of the same phrase on their lips: “It’s completely crazy!”

And Schabowski? He was sentenced to prison in 1997 for his complicity in the shoot-to-kill policy enforced by border guards against those trying to flee to the West. He was pardoned in 2000. – Rappler.com