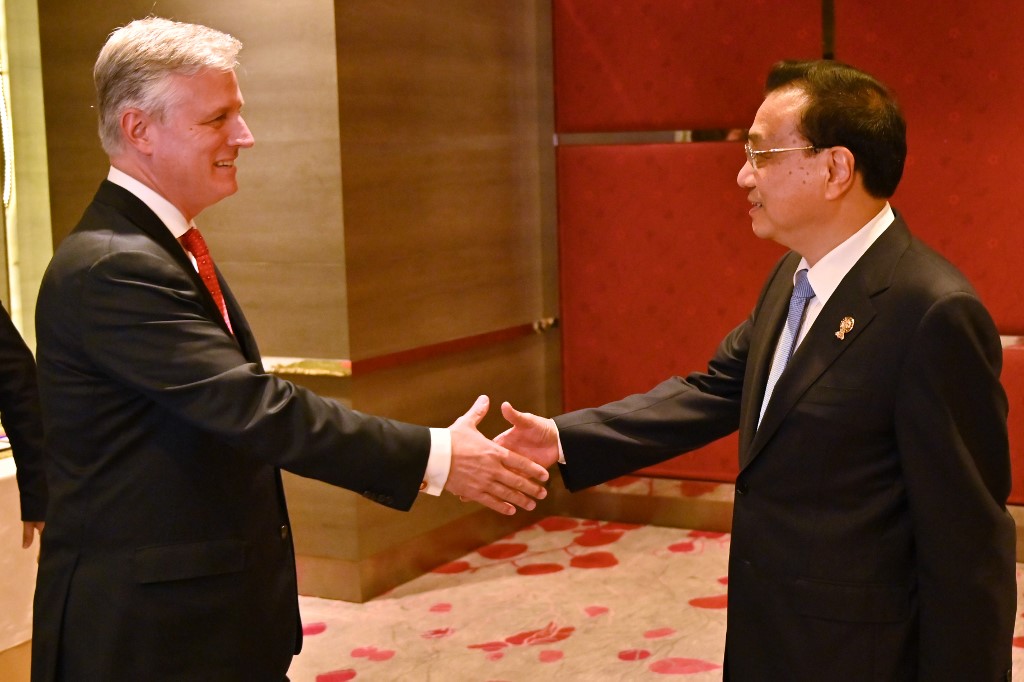 BANGKOK, Thailand – Washington and Beijing traded tit-for-tat barbs over the disputed South China Sea at a regional summit in Bangkok Monday, November 4, with the US accusing the fellow superpower of intimidating claimants in the resource-rich waterway.

China hit back with a veiled criticism of the US, accusing it of ratcheting up tensions in the waters, a key global shipping route.

Beijing lays claim to huge swathes of the sea where it is accused of building military installations and fake islands, and ramming fishing vessels.

The US has long accused it of bullying fellow claimants – Vietnam, Taiwan, Philippines, Malaysia and Brunei – calling for freedom of navigation in the area.

US national security adviser Robert O’Brien doubled down on America’s rhetoric against China on Monday, speaking at the Association of Southeast Asian Nations (ASEAN) summit.

“Beijing has used intimidation to try and stop ASEAN nations from exploiting their offshore resources,” he said, addressing an ASEAN meeting Monday.

“Big countries should not bully other countries,” he later told reporters.

China’s deputy foreign minister Le Yucheng meanwhile accused some outside countries of “meddling” in the sea, answering a question on US comments about the waters.

“Some non-regional countries cannot live with calm waters in the South China Sea and have come all this way to make waves,” he said in an apparent jab at the US.

“We always come when we’re invited, unlike other countries,” he said after Le’s comments emerged.

Tensions have flared in the flashpoint waterway in recent weeks after China deployed a survey ship to waters claimed by Hanoi.

Though the communist neighbors have long feuded over the sea, Hanoi fought back with fiery language after the most recent incursion.

The ship left after a few weeks, but Vietnam could seek tougher language in the final ASEAN communique expected to be delivered later on Monday.

Vietnam is pushing for mention of “specific incidents” in the document, “while the other sides rather want a general statement,” Philippines’ finance secretary Sonny Dominguez told reporters earlier.

China’s premier Li Keqiang said Sunday, November 3, Beijing was committed to progress on a Code of Conduct agreement, which it has repeatedly delayed since talks first started in 2002 while carrying out its expansionist strategy in the sea. – Rappler.com