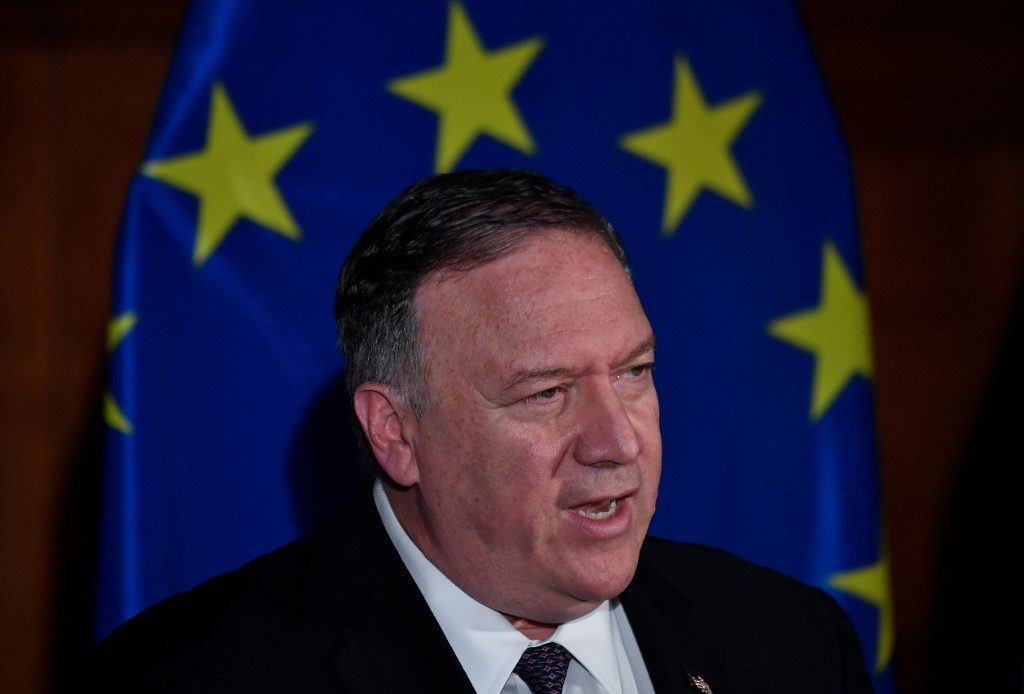 Facebook Twitter Copy URL
Copied
'Western, free nations have a responsibility to deter threats to our people' from governments like China, Russia, and Iran, says US Secretary of State Mike Pompeo

BERLIN, Germany – US Secretary of State Mike Pompeo issued a stark warning against China and Russia on the eve of the 30th anniversary of the fall of the Berlin Wall, urging Western allies to defend hard-won freedoms.

“Western, free nations have a responsibility to deter threats to our people” from governments like China, Russia and Iran, Pompeo said, speaking just a few meters (yards) away from where the Wall ran past the German capital’s world-famous Brandenburg Gate.

The US and its allies should “defend what was so hard-won…in 1989” and “recognize we are in a competition of values with unfree nations,” he added.

Pompeo’s visit came as Germany prepared to mark 3 decades since November 9, 1989, when the Berlin Wall came down, ultimately culminating in the collapse of the communist regime.

And he warned of “Chinese companies’ intent to build 5G networks,” after the German government failed to exclude tech giant Huawei from the next-generation mobile network infrastructure.

While Huawei is a world leader in the technology, the US and others including Germany’s own security services have warned that it is close to Beijing.

But fearful of a falling-out with China – Germany’s biggest trade partner – Berlin last month said only that there would be “high standards” for security in the new network.

Pompeo is on a whirlwind two-day tour of Germany where he has revisited the site of his Cold War military service on the former Iron Curtain border and is slated to meet leaders including Merkel.

While in Europe, he has looked to shore up transatlantic relations eroded by trade conflicts and discord over geopolitical crises and military spending.

Spurred by the US leaving the way open to Turkish and Russian military action in northern Syria, France’s President Emmanuel Macron told The Economist magazine this week that the NATO alliance – of which Ankara is also a member – was suffering a “brain death” of lack of coordination between Europe and Washington.

Recalling past “challenges between partners” within NATO, including France’s 1960s departure from the alliance’s command structure, Pompeo on Friday, November 8, dismissed the debate around Macron’s comments as a “kerfuffle.”

Nevertheless, Pompeo acknowledged that “NATO needs to grow and change, it needs to confront the realities of today and the challenges today.

“We can never take these things for granted, we can never assume that because there’s this infrastructure…that it will exist and of its own force, just by the nature of it continue to work and be effective.” – Rappler.com