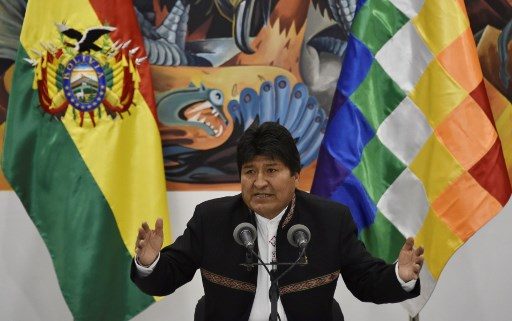 LA PAZ, Bolivia – Bolivian President Evo Morales called fresh elections on Sunday, November 10, as the Organization for American States said the previous poll – which the opposition had claimed was fraudulent – must be re-run.

Three people have died and hundreds injured in often violent protests since Morales claimed a fourth consecutive term in elections that the opposition charged were rigged.

Morales, speaking in a TV address, said he would “call for new national elections, which, by voting, allow the Bolivian people to democratically elect new authorities.”

Shortly before his announcement, the Organization for American States (OAS) recommended fresh elections.

“The first round of the elections held last October 20 must be annulled and the electoral process must begin again,” it said.

The OAS added that the first round of the elections should take place as soon as a new electoral commission is in place.

Morales’ announcement comes a day after police in 3 cities joined anti-government protests and his call on Saturday for urgent, open-ended dialogue with the opposition was rejected. – Rappler.com