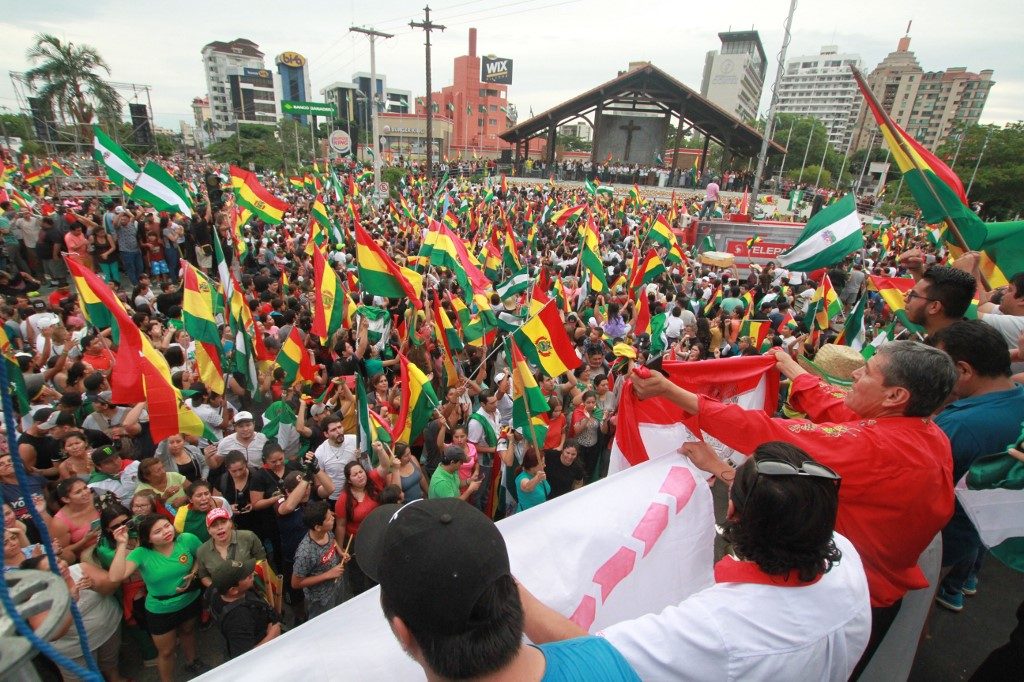 “I resign my post as president,” the leftist Morales said Sunday, November 10, in a televised address, capping a day of fast-moving events in which many ministers and senior officials quit as support for Latin America’s longest-serving president crumbled and created a temporary leadership vacuum in the country.

The streets of La Paz immediately exploded in celebration, with jubilant Bolivians waving the country’s flag, but violence and vandalism later erupted overnight and in the neighboring city of El Alto.

In the confusion, a group of 20 lawmakers and government officials took refuge at the Mexican ambassador’s residence, and Mexico announced it was offering asylum to Morales as well.

Morales later tweeted that there was a warrant for his arrest, but police commander Vladimir Yuri Calderon told local broadcaster Unitel that was not the case.

Morales also wrote that “violent groups” had attacked his home.

Police announced on Sunday night that they had arrested Maria Eugenia Choque, the head of the country’s electoral court, an institution slammed by the opposition as biased.

Morales, a member of the Aymara indigenous community, is a former coca farmer who became Bolivia’s first indigenous president in 2006.

He defended his legacy Sunday, which includes landmark gains against hunger and poverty and tripling the country’s economy during his nearly 14 years in office.

He gained a controversial fourth term when he was declared the winner of the October 20 presidential election by a narrow margin.

But the opposition said there was fraud in the vote count and 3 weeks of street protests ensued, during which three people died and hundreds were injured.

The Organization of American States carried out an audit of the election and on Sunday reported irregularities in just about every aspect that it examined: the technology used, the chain of custody of ballots, the integrity of the count, and statistical projections.

As chanting Bolivians kept up demonstrations in the street, the 60-year-old Morales called for new elections, but this was not enough to calm the uproar. The commanders of the armed forces and the police joined the calls for the president’s resignation.

Armed Forces chief Williams Kaliman told reporters he was asking Morales “to resign his presidential mandate to allow for pacification and the maintaining of stability, for the good of our Bolivia.”

A raft of ministerial resignations followed Morales’ announcement and raised the question of who was in charge, given that vice president Alvaro Garcia Linera also quit.

Under the constitution, power then passes to the president of the Senate and the speaker of the lower house of Congress, in that order. But they have resigned too.

An opposition senator, Jeanine Anez, said on Sunday she would assume the interim presidency of Bolivia.

To announce he was stepping down, Morales traveled by plane to the coca-growing Chimore region of central Bolivia, the cradle of his career in politics.

It was there in the 1980s that he made his name as a combative union leader defending farmers who grow coca.

“I do not have to escape. I have not stolen anything,” he said.

“My sin is being indigenous. To be a coca grower.”

“Life does not end here. The struggle continues,” he added.

“I am resigning so that they (the opposition leaders) do not continue to kick our brothers,” Morales said, referring to pro-government protesters who repeatedly clashed with opposition demonstrators.

On Monday, he tweeted calling on opposition leaders to “assume their responsibility to pacify the country and guarantee the political stability and peaceful coexistence of our people.”

With the situation in Bolivia unclear, regional heavyweight Colombia called for an urgent meeting of the OAS permanent council to look for solutions.

In the immediate aftermath of the shock announcement, Latin American leftist allies of Morales rallied to denounce what they said was a coup against one of their own.

Venezuela’s President Nicolas Maduro called for a mobilization of political and social movements “to demand the preservation of the life of the Bolivian native peoples, victims of racism.”

Cuba’s Foreign Minister Bruno Rodriguez described Morales as “a protagonist and a symbol of the rights of the indigenous peoples of our Americas.”

And Brazil’s Lula insisted his “friend Morales” had been removed in a coup, evidence of “an economic elite in Latin America that did not know how to share democracy with poor people.”

On Monday, the Russian government, also an ally of Morales, said violent action by the opposition had forced Morales out, while UN secretary general Antonio Guterres called for “restraint” from all sides. – Rappler.com