Australians trapped by bushfires told it’s ‘too late to leave’ 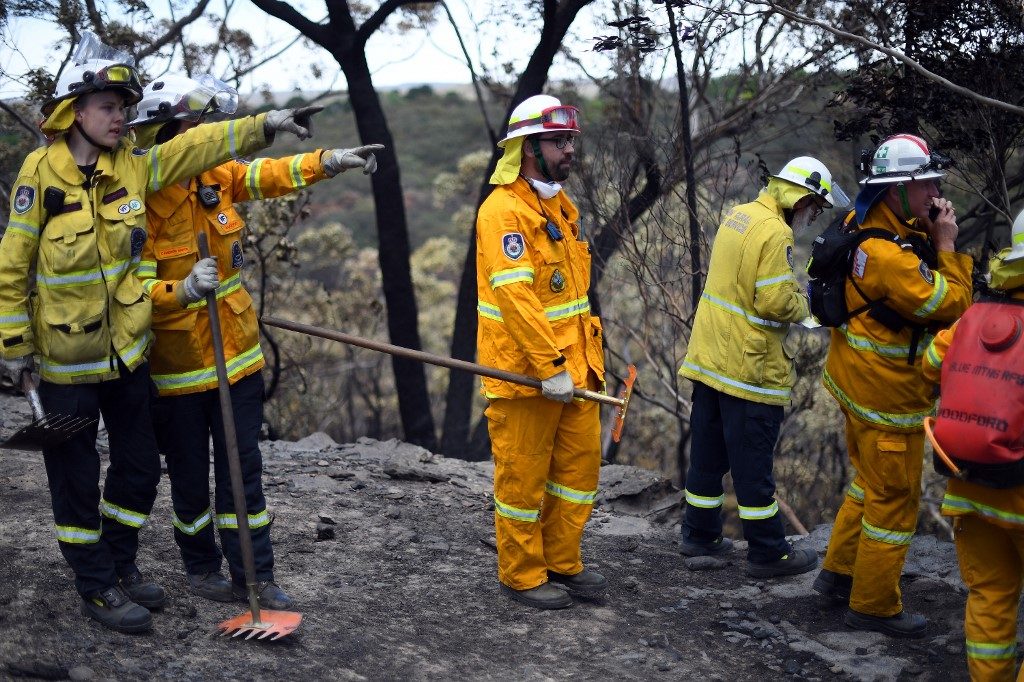 Facebook Twitter Copy URL
Copied
Authorities tell residents in fire-stricken regions to seek shelter, warning they had no time to escape before their communities were engulfed

HILLVILLE, Australia – Dozens of fires fanned by gale-force winds, scorching temperatures and tinder-dry bushland burned out of control in eastern Australia on Tuesday, November 12, as residents up and down the coast were warned it was now too late to leave.

Thousands of firefighters had spread out across New South Wales in anticipation of what they called “off the scale” fire risk and “catastrophic” conditions, but they were unable to prevent several bushfires from breaching containment lines.

Authorities told residents in fire-stricken regions to seek shelter, warning they had no time to escape before their communities were engulfed.

Eleven of the more than 100 bushfires scarring the countryside from Sydney to Brisbane were declared emergencies, with numerous towns under direct threat.

“Plenty of people have heeded the warnings and have left early,” said New South Wales Rural Fire Service Commissioner Shane Fitzsimmons. “Obviously, others have chosen not to.”

“Our advice to those who still may be there is that it is too late to leave on most of these fires, and sheltering is now your only option.”

Experts have described the conditions as the worst on record, as spring temperatures climbed toward 40 degrees celsius (104 Fahrenheit) and winds topped 80 kilometres (50 miles) per hour across a zone which has been plagued by persistent drought.

Even before unfavorable weather hit, days of fires had killed three people and destroyed at least 150 homes.

“The conditions are expected to get worse,” Fitzsimmons said, warning residents in adjacent areas to stay alert.

Up to 600 schools were closed, as well as many national parks, a total fire ban was introduced and Rally Australia – due to be held in Coffs Harbour at the weekend – was cancelled.

The military pitched in, helping firefighters with logistics and water-dropping sorties using more than 100 aircraft.

In the town of Hillville a fire that has ripped through an area the size of almost 25,000 soccer fields approached the home of Daniel Stevens.

Like many, his family – including his mother nursing a broken leg – have packed their bags but have struggled over whether to leave their house and everything they own.

“We’ll fight it first,” he told AFP, “but if it jumps the fence line into the paddock, we’ll go.”

In the nearby town of Taree, dozens of people have already moved to a showground that has become a makeshift evacuation center.

Fifty-nine-year-old Caroline Watson arrived last night with her husband and their dog.

“The fires are just rife. They are absolutely everywhere” she told AFP. “They didn’t ask us to get out, but we figured it was coming.”

Further south in the Blue Mountains on the outskirts of Sydney, veteran Winmalee firefighter Alan Gardiner said locals were “terrified and on edge”.

The town still bears the scars of a 2013 blaze that destroyed 200 homes, and residents are acutely aware that with few roads in and out of the mountains, a decision to leave too late can be fatal.

Efforts to burn fuel in a controlled way have been limited by months of drought-like conditions that made it too dangerous.

“If there is a fire, it’s going to be catastrophic,” firefighter Gardiner said.

Resident Julie Jones almost lost her home earlier in the week, her garbage bins melted and a caravan exploded as the fire came up to her door.

“This used to be the worst area for bushfires, but now the whole east coast is on fire. I think it’s climate change.”

In nearby Sydney, the authorities do not expect the city’s four-plus million people to be under direct threat, but a health warning was issued as a cloak of smoke haze drifted into the country’s biggest city.

Australia’s deadly blazes in the last week have already spread acrid smoke as far away as New Caledonia.

“I brought two horses down in the middle of the night,” she said, adding that she cut down vegetation around her home and was ready to fill her gutters with water.

People in the local community were “scared, very scared” of the fire hitting, she added.

This bushfire season is in its infancy but is already on track to be one of Australia’s worst on record.

In New South Wales alone more than a million hectares — roughly the area of Jamaica — have already burned, three times more than the whole of the last season. – Rappler.com