Exchange of fire after Israel kills Palestinian commander in Gaza 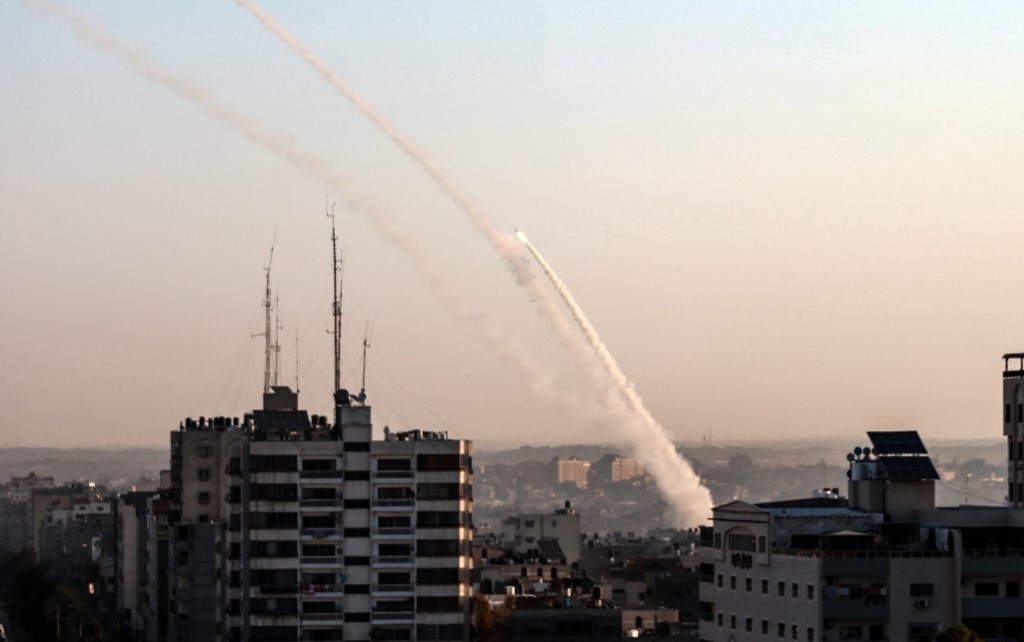 GAZA CITY, Palestinian Territories (3rd UPDATE) – Israel’s military killed a commander of Palestinian militant group Islamic Jihad in a strike on his home in the Gaza Strip on Tuesday, November 12, prompting retaliatory rocket fire and fears of a severe escalation in violence.

Israel launched air strikes in response to barrages of retaliatory rocket fire, with the Gazan health ministry reporting 4 people had been killed and 25 wounded in the Palestinian enclave.

Israel said it targeted Islamic Jihad training and weapons manufacturing sites as well as rocket-launching squads in the raids.

The rocket fire into Israel caused damage and a number of injuries, with at least one rocket hitting a house and another narrowly missing passing cars on a highway.

A factory in the city of Sderot was also hit, sparking a fire there.

Reports that a separate strike targeted an Islamic Jihad member in Damascus added to the day’s tensions.

Islamic Jihad confirmed one of its officials, Akram Ajouri, was targeted in Damascus, with Syrian state news agency SANA reporting an Israeli strike hit Ajouri’s home, “killing his son Muadh and another person.”

Israel had not commented on that strike.

The initial Israeli raid in the early hours of Tuesday, thought to have been carried out by a drone, killed Islamic Jihad commander Baha Abu Al-Ata, 42.

Islamic Jihad confirmed his death along with that of his wife.

Israel blamed Ata for recent rocket fire into its territory and said he was preparing further attacks.

As the retaliatory rocket fire followed, air raid sirens rang out in various parts of Israel as residents took cover in bomb shelters.

Israel’s military said on Tuesday morning that around 50 rockets had been fired at its territory and air defenses had intercepted around 20 of them, but that number increased throughout the day.

“We woke up and saw the news regarding the assassination at 5:30 am (0330 GMT), and we celebrated,” said a man who gave his name only as Netanel in the town of Sderot, near the Gaza border.

“We are strong and we want to fully support the security of Israel.”

Schools were closed in both the Gaza Strip and in parts of Israel, including in the commercial capital Tel Aviv.

Israeli Prime Minister Benjamin Netanyahu said Ata over the past year had “planned and executed many attacks” and “fired hundreds of rockets at communities adjoining Gaza.”

“Israel is not interested in escalation, but we shall do everything necessary in order to defend ourselves,” he said in a televised statement from defense headquarters.

“I’m telling you in advance, it could take time.”

Nadav Argaman, the head of Israeli domestic security agency Shin Bet, which took part in the targeted strike, said the operation “allowed us to reach the level of the bed in which he slept, the small room in which he lived, in which he hid.”

Damage from a blast could be seen at Ata’s home in the Shejayia district in the east of Gaza City.

Mosque loudspeakers rang out with news of Ata’s death early Tuesday and crowds joined his funeral procession through the streets of the city, occasionally firing guns into the air.

A joint statement by Gaza’s militant groups said Israel had crossed “all red lines” and would face consequences.

Islamic Jihad said it was on “maximum alert,” while Hamas, the Islamist movement that rules the Palestinian enclave, threatened revenge.

Israel said Ata was behind rocket fire toward a music festival in the Israeli city of Sderot in August as well as further rocket attacks at the start of November.

It has also accused him of being behind sniper fire and drone launchings.

Ata “is responsible for most of the terror attacks in the last year from the Gaza Strip,” the army said, describing him as a “ticking bomb.”

It alleged he was “promoting preparations to commit immediate terror attacks in various ways towards Israeli civilians and (Israeli) troops during the recent few days.”

The strikes and rocket fire raised the possibility of a severe escalation between Israel and Palestinian militants in Gaza.

Three wars have been fought between them since 2008 and Gaza has been under a strict Israeli blockade for more than a decade.

Islamic Jihad is the second most-powerful militant group in the Gaza Strip behind Hamas, to which it is allied.

The flare-up comes at a sensitive time politically for Israel.

A September 17 general election ended in a deadlock and a new government is yet to be formed. It was the second election since April, when polls also ended inconclusively. – Rappler.com