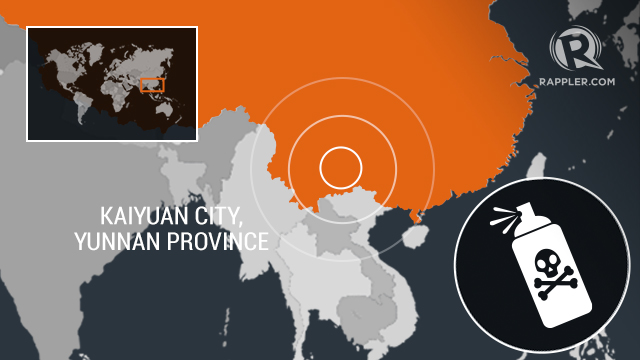 BEIJING, China – More than 50 people, mostly children, were injured by a man who broke into a kindergarten in southwest China and sprayed them with corrosive liquid, local authorities said Tuesday, November 12.

The attack took place on Monday at 3:35 pm (0735 GMT), authorities said on their Twitter-like Weibo account.

Some 51 children and 3 teachers were admitted to hospital for treatment, two with “severe symptoms”.

Police arrested Kong less than an hour after the attack.

“Because his parents divorced during his childhood, the lack of family warmth resulted in psychological distortion,” said local authorities, adding that Zhang’s work and life were unsatisfactory as well.

All this created a “pessimistic mentality and thoughts about retaliating against society”, they said.

Violent attacks targeting schoolchildren are not uncommon in China, which has seen a slew of deadly incidents over the past few years — usually involving knives.

In April last year, a 28-year-old man killed 9 middle-school students as they were returning home in one of the country’s deadliest knife attacks in recent years.

The killer, who said he had been bullied when he attended the school in northern China’s Shaanxi province, was executed in September last year.

Later in 2018, a knife-wielding woman injured 14 children at a kindergarten in Sichuan province.

The 39-year-old assailant slashed students while they were returning to the classroom after morning exercises. – Rappler.com