Nov 14, 2019 1:58 PM PHT
Agence France-Presse
Facebook Twitter Copy URL
Copied
(UPDATED) The Daijosai, considered the most important ritual for Japan's imperial household, comes 3 weeks after Naruhito proclaims his ascension to the Chrysanthemum Throne and is performed only once in an emperor's reign 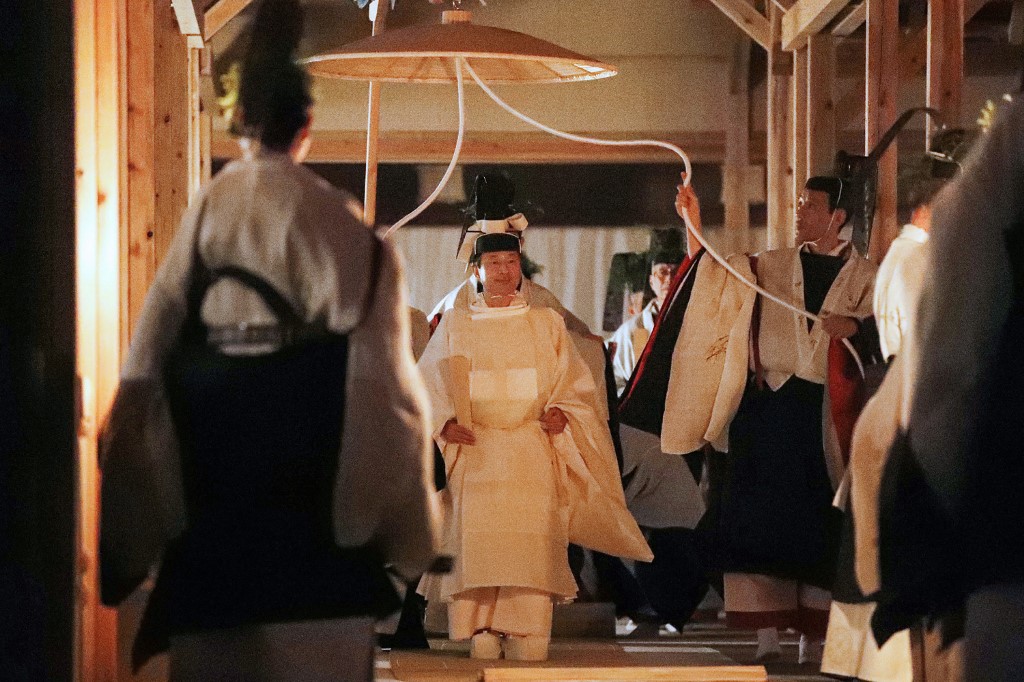 TOKYO, Japan (UPDATED) – Japan’s new Emperor Naruhito on Thursday, November 14, began an elaborate and secretive ritual dating back 1,300 years, giving thanks to the Sun Goddess Amaterasu as part of his enthronement rites.

The Daijosai, considered the most important ritual for Japan’s imperial household, came 3 weeks after Naruhito proclaimed his ascension to the Chrysanthemum Throne and is performed only once in an emperor’s reign.

Television footage showed the emperor in white silk vestments walking slowly through a specially constructed complex of wooden buildings in the imperial palace known as the Daijokyu.

Escorted part of the way by servants, Naruhito entered one of two halls where the main ritual would take place overnight.

The emperor was to offer newly harvested rice to Amaterasu, from whom the Japanese imperial line is considered to have descended, and other deities of heaven and earth.

He was to recite prayers for peace and “share” a feast with the goddess including salmon, abalone, jujube fruit, and millet, washed down with sake.

Empress Masako, wearing a white layered kimono, was to offer her own prayers in separate halls within the Daijokyu.

The emperor disappeared from sight after he entered the main hall by torchlight. Throughout the rituals that end just before dawn on Friday, November 15, he was to be accompanied only by a lady-in-waiting.

The rite was mentioned in historical documents dating back as far as the seventh century but was discontinued for more than 200 years because of civil war and financial constraints, starting up again in the late 17th century.

The Daijosai, which is carried out whenever a new emperor ascends the throne, is estimated to cost 2.7 billion yen ($25 million), including building and dismantling the Daijokyu and later banquets at the palace.

The Daijokyu complex is built on an area of about 2,700 square meters and consists of around 30 pavilions of different sizes for those performing and observing the rituals.

“It was originally a simple ceremony using natural materials but it is expensive to replicate it in the modern age,” said Keiko Hongo, professor at the Historiographical Institute of the University of Tokyo.

The buildings are of a traditional, simple construction. The floors are laid with straw mats and the pillars made from logs with unstripped bark.

The Daijosai, though not officially a state occasion, has drawn criticism given its highly religious nature and cost.

The rice used in the Daijosai was planted earlier in the year after palace courtiers selected sites using an ancient ritual involving the shells of rare green sea turtles.

Two thin plates made from turtle shells were heated over a flame to produce cracks, which “told” officials to grow the rice in two locations – the ancient capital of Kyoto and the Tochigi region north of Tokyo.

The harvesting in September was also bound in ritual. The day before, rituals were performed to “purify” everyone involved.

On the day, the emperor’s envoys offered prayers and the rice was harvested by farmers in traditional clothes and black hats at the two locations selected.

Only the most carefully selected heads are threshed to make the offerings for the Daijosai. – Rappler.com