Nov 15, 2019 1:26 AM PHT
Agence France-Presse
Facebook Twitter Copy URL
Copied
(UPDATED) The gunman is in custody in 'grave' condition as officers stormed Saugus High School in Santa Clarita – the latest in a relentless cycle of classroom shootings that have left around 300 youngsters dead over two decades 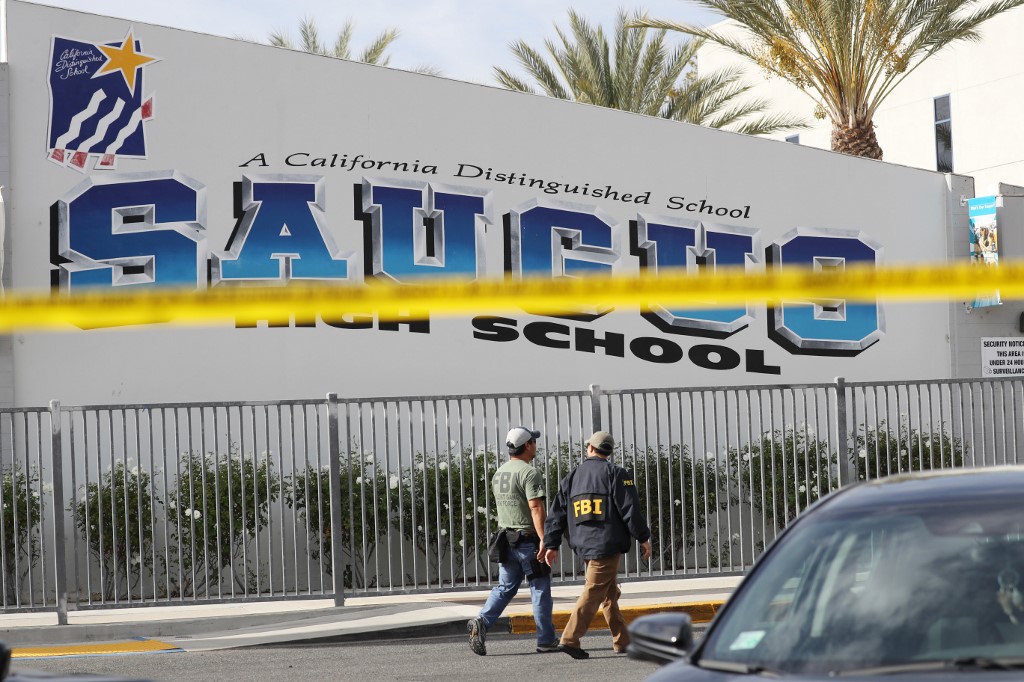 SANTA CLARITA, USA (UPDATED) – A teenage boy gunned down fellow students at a California high school on his 16th birthday Thursday, November 15, killing two and wounding another 3 before turning the pistol on himself.

The gunman was taken into custody in “grave” condition, police said, as officers stormed Saugus High School in Santa Clarita – the latest in a relentless cycle of classroom shootings that have left around 300 youngsters dead over two decades.

The chilling scene played out even as lawmakers in Washington were debating the latest attempt at gun control legislation that has stalled in Congress for months. 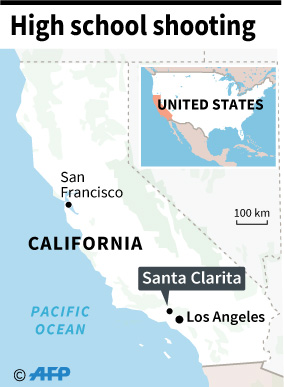 Terrified students described barricading themselves into classrooms while others fled as word rapidly spread of the unidentified Asian boy opening fire with a .45 caliber semiautomatic.

“Detectives reviewed the video at the scene, which clearly show the subject in the quad withdraw a handgun from his backpack, shoot and wound 5 people, and then shoot himself in the head,” homicide captain Kent Wegener told a news conference.

The school – 40 miles (65 kilometers) north of Los Angeles – was locked down, and witness descriptions and surveillance footage identified the suspect within an hour of the shooting.

Officers went to his home and his mother and girlfriend were at a local police station speaking with detectives.

No other suspects are currently being investigated.

Seventeen-year-old student Andrei Mojica was in his government class when someone burst in and said there was a shooter on campus.

“That’s when my heart sank,” he told the Los Angeles Times.

The class of around 30 students followed their emergency drills and began barricading the doors with desks and tables, before waiting in silence, ready to wield a fire extinguisher as a weapon.

“We had no clue whether the shooter was on the opposite side of campus or right outside our door,” he told the newspaper. “That fear made it feel like we were waiting in silence forever.”

Finally they were escorted from the classroom by a SWAT team.

A tearful mother waiting beside a nearby church with other parents said she had dropped off her ninth-grader about a minute before the shooting started.

“I haven’t seen my son yet but I’ve talked to him. He’s okay … He just sounded numb,” she told an NBC affiliate.

“All he’s said is he was walking through the quad and somebody started shooting and he turned and he saw that it was real and ran into a classroom,” she added.

Students told CNN they had heard multiple loud bangs that “sounded like fireworks” and began to run.

Twenty-four ambulances, 7 paramedic units and a helicopter were at the school campus, opposite a residential area, along with dozens of squad cars.

Agents from the federal Bureau of Alcohol, Tobacco, Firearms and Explosives, as well as firefighters, were among those responding.

The incident is the latest of more than 40 shootings at US schools since as recently as May 2018, when a 17-year-old killed 10 people, eight of them students, in Santa Fe, Texas.

Authorities said his shotgun and revolver were legally owned by his father.

There is roughly one school shooting a week in the United States, according to Everytown for Gun Safety.

The perennial hot-button issue of arms control threatens to spill into next year’s election.

“Every day, our children and our communities are forced to endure horrendous acts of violence and bloodshed, while Republicans continue to obstruct meaningful, bipartisan solutions to end the epidemic of gun violence,” said Nancy Pelosi, the Democratic speaker of the House of Representatives.

News of the shooting broke during a debate on gun control legislation at the Senate in Washington.

Democrat Senator Richard Blumenthal was speaking as he was handed a piece of paper by an aide.

“On the floor right now there’s a school shooting in Santa Clarita, California,” he told the chamber.

“How can we turn the other way? How can we refuse to see that shooting in real time, demanding our attention, requiring our action? We are complicit if we fail to act.”

California senator Kamala Harris, a Democratic candidate for the 2020 election, said she was “heartbroken and praying for Santa Clarita.” – Rappler.com