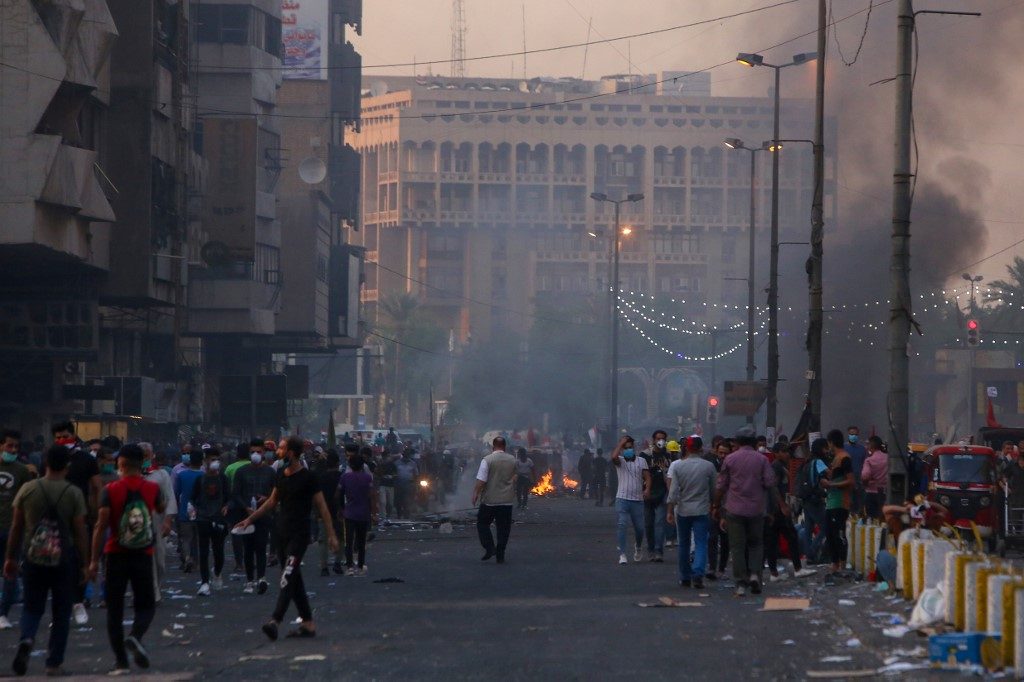 Facebook Twitter Copy URL
Copied
'If those in power think that they can evade the benefits of real reform by stalling and procrastination, they are delusional,' says Grand Ayatollah Ali Sistani

BAGHDAD, Iraq – Iraq will never be the same after weeks of demonstrations demanding sweeping reform, its top Shiite cleric said on Friday, November 15, in his most emphatic endorsement yet of the protest movement.

Grand Ayatollah Ali Sistani said authorities must respond quickly to the demands of the protesters who have thronged Baghdad and cities across the mainly Shiite south since early October in an outpouring of anger over rampant corruption and lack of jobs.

“If those in power think that they can evade the benefits of real reform by stalling and procrastination, they are delusional,” Sistani said in his weekly sermon, delivered by a representative in the Shiite holy city of Karbala

“What comes after these protests will not be the same as before, and they should be aware of that.”

The demonstrations swiftly escalated with demands for root-and-branch reform of the political system.

Sistani cautiously backed the protests when they began but has since firmed up his backing, describing protests on Friday as “the honorable way” to seek change.

In the protest hotspot of Kut, crowds swelled after his sermon, an Agence France-Presse (AFP) correspondent reported.

But those camped out in the capital’s main protest camp in Tahrir (Liberation) Square demanded more from the Shiite religious leadership or marjaiyah.

“Where is the marjaiyah? Does it only deliver sermons and speeches?” asked one protester angrily, an Iraqi tricolor draped over his shoulders.

More than 330 people have died since the rallies erupted, making them the deadliest grassroots movement to hit Iraq in years.

They present the biggest threat so far to the political system ushered in by the US-led invasion which toppled the Sunni-dominated regime of longtime dictator Saddam Hussein in 2003.

The political establishment has closed ranks, rejecting the protesters’ demands for the government to step down.

Sistani, who is based in the Shiite holy city of Najaf and never appears in public, denies being party to the deal and has warned outside powers against “imposing” anything on Iraq.

Days later, he met the United Nations’ top official in Iraq, Jeanine Hennis-Plasschaert, to back her phased roadmap for tackling the crisis.

The plan calls for electoral reforms within two weeks followed by constitutional amendments and infrastructure legislation within 3 months.

‘One of boldest moves yet’

On Friday, Sistani urged lawmakers to “work quickly to pass a fair electoral law that would restore people’s faith in the electoral process.”

“Passing a law that does not provide this opportunity to voters would not be acceptable or useful,” he said.

Parliament received a draft of a new electoral law this week but has yet to begin debating it.

A source with close ties to the Shiite religious leadership told AFP that Iranian delegates Tehran had tried to deliver a letter to Sistani asking him to back the government and tell protesters to leave the streets.

Sistani “refused to answer the letter or even receive them,” but he did meet with Soleimani, the source said.

“Qasem Soleimani heard some tough words from the marjaiyah about the Iranian role in the Iraqi crisis,” he added.

“That is why his latest words on the protests revealed how seriously he perceived the current situation in Iraq,” Hasan said.

“By more clearly siding with the protesters, Sistani made one of his boldest moves yet, the outcome of which may determine the balance of power within the Shiite community and Iraqi politics for years to come.” – Rappler.com