Here are key moments from the second day of public hearings in the Democratic-controlled House of Representatives:

One hour after Yovanovitch began testifying before a live television audience of millions of Americans, Trump fired off a bombshell tweet attacking the career diplomat, a 33-year veteran of the State Department. (READ: Ousted U.S. envoy testifies at Trump impeachment hearing)

“Everywhere Marie Yovanovitch went turned bad,” the president tweeted. “She started off in Somalia, how did that go? Then fast forward to Ukraine, where the new Ukrainian President spoke unfavorably about her in my second phone call with him.

“It is a US President’s absolute right to appoint ambassadors,” Trump tweeted. “They call it ‘serving at the pleasure of the President.'”

In a stunned hearing room, Adam Schiff, the Democratic chairman of the House Intelligence Committee, read out part of Trump’s tweet and asked Yovanovitch for her reaction.

Trump’s tweet came shortly after Yovanovitch had recalled how upset she was over being recalled from Kiev in May as the result of a campaign led by former New York mayor Rudy Giuliani, Trump’s personal attorney.

She also said she was “shocked and devastated” when she found out that Trump had referred to her as “bad news” in a July 25 telephone call with Ukrainian President Volodymyr Zelensky.

Yovanovitch, who is currently teaching at Georgetown University and remains a State Department employee, said she felt a “vague threat” after Trump said she would “go through some things.”

“It was a terrible moment,” she said. “A person who saw me actually reading the transcript said that the color drained from my face.” 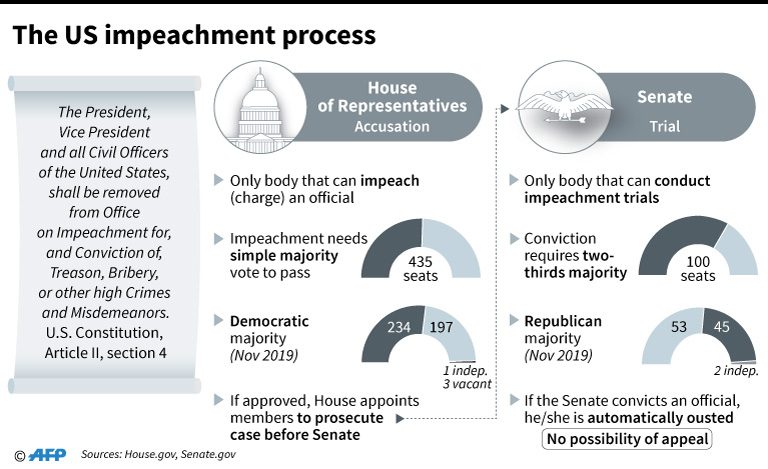 Yovanovitch said she did not understand why she became the target of a “smear campaign” against her that she said was led by Giuliani with the assistance of several corrupt Ukrainians.

“I do not understand Mr. Giuliani’s motives for attacking me,” Yovanovitch said, adding that she was the victim of “baseless allegations” and a “campaign of disinformation.”

She said that she has served under both Republican and Democratic presidents and had never expressed any public criticism of Trump.

“I obviously don’t dispute that the president has the right to withdraw an ambassador at any time for any reason, but what I do wonder is why it was necessary to smear my reputation falsely?” she said.

Yovanovitch was asked by Republican lawmakers about the propriety of Hunter Biden, the son of Joe Biden, serving on the board of the Ukrainian gas company Burisma while his father was Barack Obama’s vice president.

“I think it could raise the appearance of a conflict of interest,” she said.

Yovanovitch said her early recall from Kiev and other events have severely damaged morale at the State Department and she made it clear that she was disappointed she did not receive more support from Secretary of State Mike Pompeo.

“I think it has had exactly that, a chilling effect,” she said. “People don’t know, kind of, whether their efforts to pursue our stated policy are going to be supported. And that is a dangerous place to be.

“The crisis has moved from the impact on individuals to an impact on the institution,” she said. “The State Department is being hollowed out from within at a competitive and complex time on the world stage.

“This is not a time to undercut our diplomats.”

Yovanovitch was poised and unflappable under intense questioning by Democratic and Republican lawmakers and lawyers for both sides, providing crisp and clear responses to their questions or short “Yes” or “No” answers.

Yovanovitch answered virtually every question she was asked but declined to do so when asked about the impact on her family.

“I really don’t want to get into that but thank you for asking,” she said.

“It’s been a very, very difficult time,” she said at one point. “All we have is our reputation and this has been a very painful period.”

After Yovanovitch completed her testimony and Schiff dismissed the panel, members of the public who attended the hearing burst into applause, something rarely heard at a House committee hearing. – Rappler.com