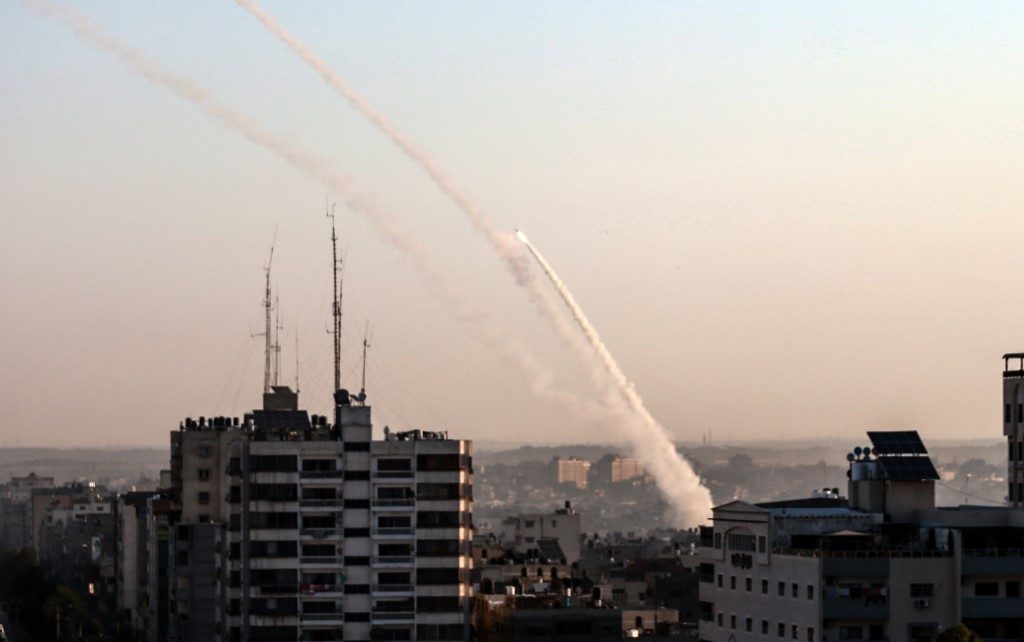 Underscoring the frailty of the truce, a volley of rockets was fired from the coastal enclave into the Jewish state after the deal officially took effect on Thursday morning.

Israel hit back with strikes early Friday against Islamic Jihad, the second most powerful Palestinian militant group in the Gaza Strip after Islamist movement Hamas which runs the enclave.

Hours before the ceasefire was due to begin, Israel hit the family home of Rasmi Abu Malhous, who it described as an Islamic Jihad commander.

The strike – in Deir al-Balah – killed Abu Malhous, his two wives and 5 children, said the Palestinian health ministry in Gaza.

Israeli military spokesman Jonathan Conricus said the target, “like many others, had the tactic of hiding ammunition and military infrastructure in their own residence.”

The army acknowledged civilian casualties but said they were unanticipated.

“According to the information available to the IDF (Israel Defence Forces) at the time of the strike, no civilians were expected to be harmed,” it said in a statement to Agence France-Presse (AFP).

“The IDF is investigating the harm caused to civilians by the strike,” it added.

Earlier in the week the army accused Islamic Jihad fighters of using “human shields” in an attempt to discourage Israel attacking.

Survivors of the strike targeting Abu Malhous, including more of his children, were taken to a local hospital.

“They are innocents and they will have only painful memories. It will take time for them to recover,” Eid Abu Malhous, a relative who tried to comfort survivors, told AFP.

The latest round of fighting began on Tuesday when an Israeli strike killed a top Islamic Jihad commander, Baha Abu al-Ata, and his wife and brought a wave of rocket fire into Israel in response. (READ: Exchange of fire after Israel kills Palestinian commander in Gaza)

Israel said that he had been the brains behind many operations against the Jewish state. Although smaller than Hamas, Islamic Jihad is considered more radical.

Following his death Islamic Jihad launched more than 450 rockets into Israel, causing injuries and property damage but no casualties.

One rocket narrowly missed speeding cars on a busy highway.

Israel responded with a series of strikes on Gaza that killed a total of 34 Palestinians and wounded more than a hundred.

It was the deadliest surge in violence in Gaza since May 2018 when border clashes sparked by the opening of the US embassy in Jerusalem left about 60 Palestinians dead from Israeli army fire.

Friday’s Israeli strikes, against what was described as a “rocket production site,” left at least two wounded on the Palestinian side, the Gaza health ministry said.

It came after at least 7 rockets were fired at Israel from Gaza Thursday, which Israel said it viewed “with great severity.”

Israel said it was prepared to “continue operating as necessary against all attempts to harm Israel civilians.”

The ceasefire brokered by Egyptian and UN officials, the usual mediators between Gaza and Israel, was agreed as the flare-up raised fears of a new all-out conflict.

To keep a lid on tensions, Palestinians canceled weekly protests along the Gaza-Israeli border that have often led to violence since March 2018.

The violence came at a politically sensitive time for Israel, with no new government in place since a September election ended in deadlock.

Unusually, Israel has singled out Islamic Jihad rather than hold Hamas responsible for all violence emanating from its territory.

Israeli analysts said it was a clear signal the army sought to avoid a wider conflict in Gaza, where Israel and Palestinian militants have fought 3 wars since 2008.

In unrelated violence in the occupied West Bank on Friday, Israeli border police clashed with stone-throwing Palestinians protesting Israeli land confiscation in the village of Surif, northwest of Hebron.

The police fired rubber bullets, one of which hit a Palestinian news cameraman in the face, an AFP photographer who witnessed the injury said.

Mu’ath Amarneh, who works for a local news agency, was taken to a hospital in Hebron. His condition was not known.