Nov 16, 2019 7:29 PM PHT
Lian Buan
Facebook Twitter Copy URL
Copied
When autocrats 'try to silence journalists, they will hear from all of us,' Amal Clooney says as she presents the Sergei Magnitsky Award for Outstanding Investigative Journalist to Maria Ressa 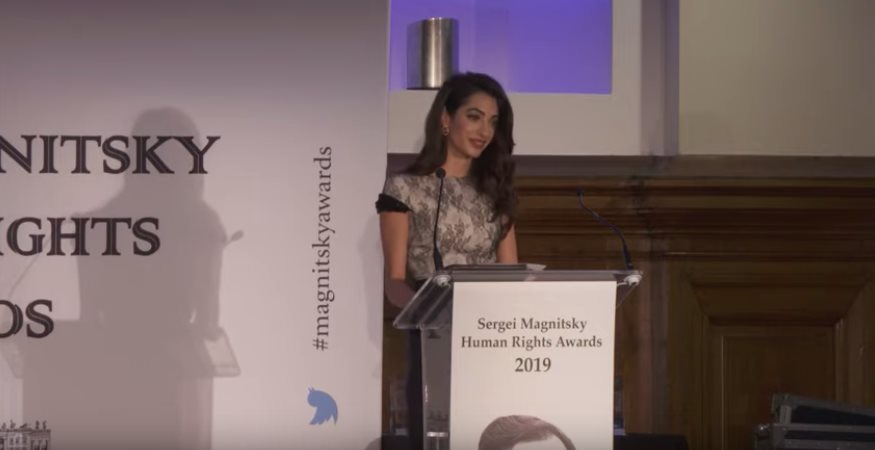 “My hope is we can join forces to create our own cautionary tale, one that signals to the autocrats of this world that when they try to silence journalists, they will hear from all of us,” Clooney said  at the Sergei Magnitsky Human Rights Awards held in London on Saturday, November 16.

Sergei Magnitsky is the Russian lawyer killed in 2009, and whose death put a spotlight on human rights violations in Russia. His client at the time, fund manager Bill Browder, quit his job and helped create the global Magnitsky Act, which holds government officials to account in at least 6 countries around the world. Browder wrote a book and put up the awards on his lawyer’s behalf.

Ressa and slain Saudi journalist Jamal Khashoggi are the journalists honored on Saturday alongside activists and human rights workers.

Reporters Without Borders says there is an “unprecedented level of fear and danger for journalists” because of politicians’ hostility towards the press, fueled by technology-assisted war on facts.

In her speech, Ressa said the global trend of disinformation coming from autocratic leaders must force even the non-journalists to join the pushback.

“Please ask yourselves again, ask your friends again, what are you willing to sacrifice for the truth, then please think about it, and go do it!” said Ressa.

Ressa, Khashoggi, Reuters reporters Wa Lone and Kyaw Soe Oo – who were imprisoned in Myanmar over their reporting of the Rohingyan crisis – and the staff of the Capital Gazette in Annapolis, Maryland, including 5 members killed in a June shooting, were awarded by Time magazine in 2018 as Person of The Year.

They were collectively branded as Guardians of Truth.

“These guardians of truth, is this what is demanded of journalists today, do we have to give up so much to be a good journalist?” Ressa asked.

UN Special Rapporteur on extrajudicial killings Agnes Callamard presented the posthumous Courage Under Fire award to Khashoggi, whose gruesome murder in 2018 inside the Saudi Arabia consulate in Turkey is being ascribed to the Saudi government.

“We denounce not only the actors of his murder but denounce the coward that failed to act in the aftermath of his killing,” said Callamard.

The United States government, under President Donald Trump, has said there was no irrefutable evidence of the involvement of Crown Prince Mohammed bin Salman in the killing, and has stressed the importance of the strategic partnership between Washington and Riyadh.

Khashoggi’s Turkish fiancee, Hatice Cengiz, was emotional in receiving the journalist’s posthumous honor, saying “I don’t know what I will say today..The person who should have been here is Jamal.”

Regaining composure after Callamard returned to the stage to hug her, Cengiz said Khashoggi “was the true warrior in the freedom of media.”

“I feel that Sergei and Jamal’s spirits and souls are with us right now, and they are smiling with us. As much as they have taken Jamal, we will continue to fight and keep his values alive. Those who wanted him gone want us to forget him as soon as possible, but that will never happen,” Cengiz said.

Cengiz said she hoped memorializing Khashoggi will send “a warning to any government or regime who will think it’s possible to just kill a man and walk away without any consequences.”