Nov 16, 2019 8:00 PM PHT
Agence France-Presse
Facebook Twitter Copy URL
Copied
(UPDATED) Political analyst Dixon Sing says the rare appearance could be a 'hint' to protesters that China can still use the People's Liberation Army in a 'more naked manner' at the rallies 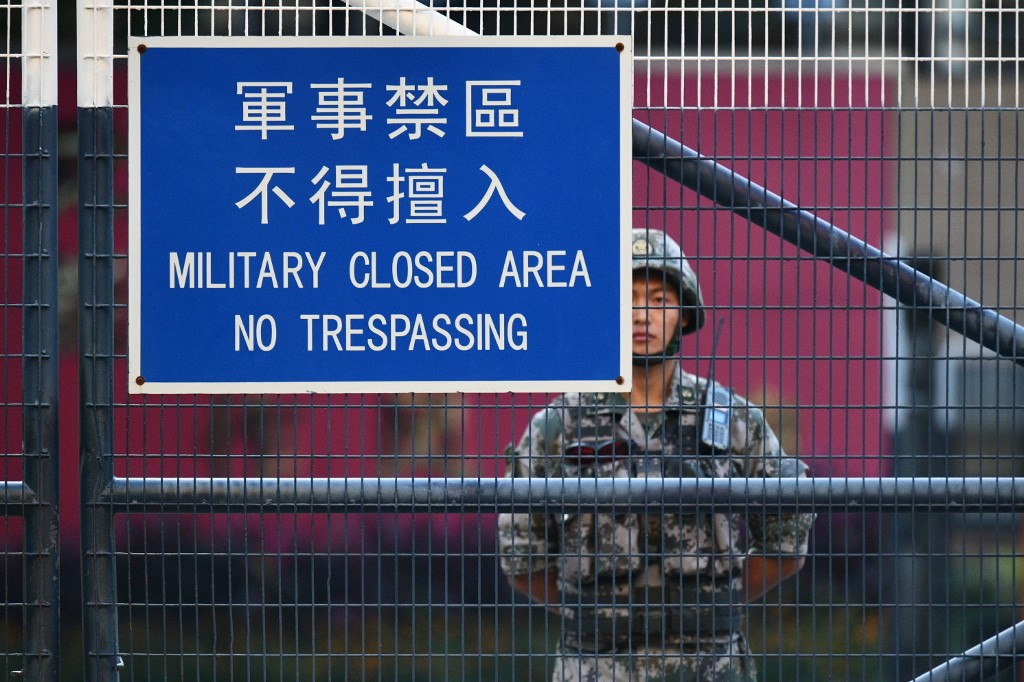 HONG KONG (UPDATED) – Soldiers from the Chinese People’s Liberation Army briefly left their Hong Kong barracks on Saturday, November 16, to help the clean-up after a week of disruption caused by pro-democracy protests, a rare and highly symbolic troop movement unsolicited by the city’s embattled government.

The action saw scores of soldiers from the garrison, which is confined to the barracks under Hong Kong’s mini-constitution, with crewcuts and identical gym kits conduct a lightning-quick removal of bricks and debris near their base.

Chinese state media has repeatedly warned that troops could be deployed to quell an unprecedented crisis in the semi-autonomous city that has entered its 6th month. (READ: Hong Kong: 5 months of unrest)

Confirming the brief deployment on Weibo, China’s Twitter-like social media platform, the PLA said it acted to open a debris-strewn road outside their Kowloon Tong barracks to traffic, winning “applause from residents” in the process.

The last time soldiers assisted in the city was in 2018 to clean up after a typhoon.

A spokesman for Hong Kong’s embattled government said the troop movement was not solicited by city authorities and instead was a voluntary community activity initiated by themselves.”

Their appearance on Hong Kong’s streets raised tensions in a city rocked by a week of intensified violence and chaos.

The city remains strewn with debris, barricades and scarred by scorch marks from petrol bombs thrown during clashes between police and protesters.

The increasingly ugly scenes prompted China’s President Xi Jinping to warn the “one country, two systems” model governing Hong Kong was being jeopardized by the protests.

Semi-autonomous Hong Kong enjoys more freedoms than the mainland, although many feel those liberties are being chipped away.

Article 14 of the Basic Law – Hong Kong’s mini-constitution since its handover from Britain to China in 1997 – allows the local government to request help from PLA garrisons in the city in the event of a public order breakdown.

Although it was not requested, the PLA’s cameo “sends a subtle message that China is behind” the government, said political analyst Dixon Sing.

“It also gives a hint to the protesters… that if things really turn sour, China can still use the PLA in a more naked manner,” he added.

Chinese media has waged a propaganda war against Hong Kong’s protest movement describing them as “rioters” causing wanton damage to the city of 7.5 million.

The protests started against a now shelved bill to allow extradition to China but have billowed into wider calls for democracy.

Two people have died this month as the violence worsened, while the financial hub has been pushed into a recession by the turmoil.

Protesters have launched a “Blossom Everywhere” campaign of roadblocks, vandalism and protest across the city.

That shut down large chunks of the train network, forced schools and shopping malls to close and stretched police resources this week.

Meanwhile universities have emerged as bases for a movement previously defined by its fluid, unpredictable nature with stockpiles of weapons and supplies.

Hong Kong is a city divided and reactions to the movement from inside the PLA garrison reflected that schism.

A woman in her 50s who gave her name only as Lee applauded the clean up effort near the Kowloon Tong PLA base, saying it felt “so good” to see them.

“How did a Hong Kong that was doing just fine become like this?” she added.

But pro-democracy protesters, who remained in the streets as night fell, read the hour-long action from the barracks as a warning.

“We don’t touch them (the PLA barracks) we don’t know what kind of weapons they have and their mindset is also different from Hong Kong police” said a 24-year-old student protesters who identified himself by the surname Leung.

Arguments and scuffles also broke out on Saturday between pro-government and pro-democracy activists during clean-ups across the city.

At the Hong Kong Polytechnic University in Kowloon, student protesters insisted they wanted to maintain an occupation of the campus and keep control of one of the major tunnels to Hong Kong Island.

The Cross Harbor Tunnel has been closed since Tuesday, its toll booths torched and piles of rubble laid across the road.

“We are here for the long term,” a 20-year-old student who identified himself only as E said.

Earlier on Saturday morning a group of around 500 people, mostly middle-aged and senior citizens, rallied outside the Hong Kong government’s headquarters to show support for the police, who have been heavily criticized over their handling of the crisis. – Rappler.com