Britain’s Prince Andrew has ‘no recollection’ of Epstein sex accuser 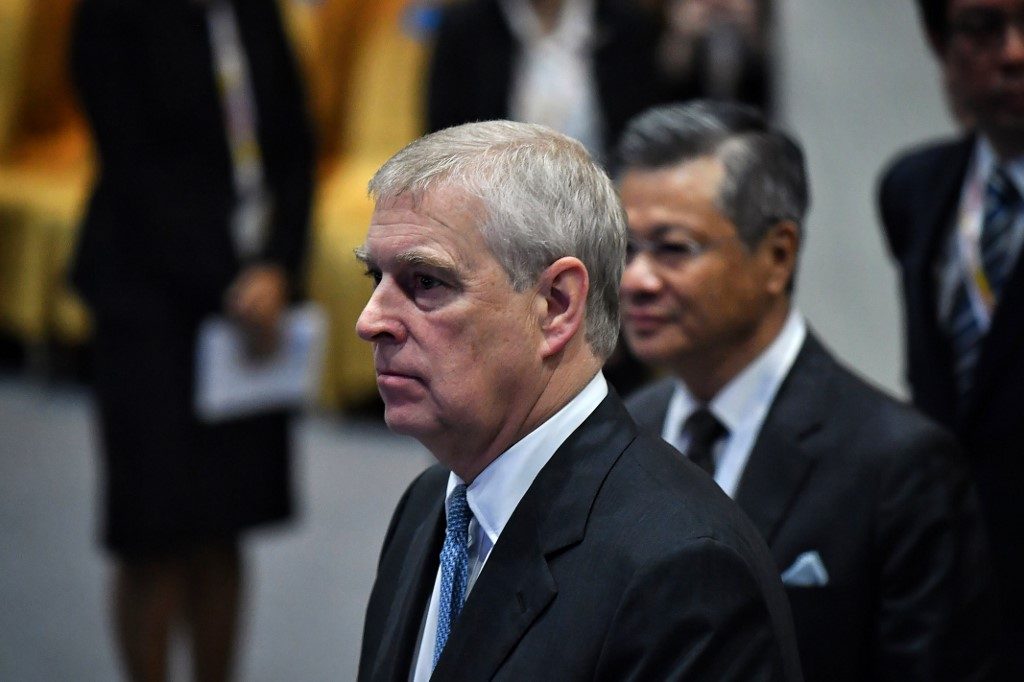 LONDON, United Kingdom – Britain’s Prince Andrew has said he does not remember meeting Virginia Roberts, one of disgraced US financier Jeffrey Epstein’s alleged victims, who claims she was forced to have sex with the royal.

But Andrew admitted in an interview with the BBC due to be broadcast on Saturday, November 16, that his decision to remain friends with Epstein after he was convicted of soliciting prostitution from a minor was a serious error of judgement.

“I have no recollection of ever meeting this lady, none whatsoever,” Andrew told BBC interviewer Emily Maitlis, according to extracts from “Prince Andrew and the Epstein Scandal” released ahead of the program airing.

Andrew, 59, the second son of Queen Elizabeth II and 8th in line to the throne, has been heavily criticized over his links to multimillionaire Epstein, who died in custody in the US in August.

A photograph apparently showing Andrew with his arm around then 17-year-old Roberts, now Giuffre, and with Epstein’s friend Ghislaine Maxwell standing in the background, has been widely published. Supporters of Andrew, however, have disputed its authenticity.

Epstein pleaded guilty in 2008 to procuring a girl under the age of 18 for prostitution and served 13 months in a US prison before being released on probation.

He was arrested in July on new federal charges that he trafficked girls as young as 14 for sex, but was found dead in New York’s high-security Metropolitan Correctional Center on August 10 as he awaited trial.

A coroner ruled that he committed suicide by hanging.

‘The wrong thing to do’

The BBC interview is the first time Andrew has answered questions on his relationship with Epstein. In 2015, he used a public appearance at Davos in Switzerland to deny the claims.

Pressed over the fact that he remained friends with the disgraced financier after his conviction, even staying at his Manhattan townhouse, Andrew said he regretted the decision.

“It was a convenient place to stay,” the prince added.

“I have gone through this in my mind so many times. At the end of the day, with the benefit of all the hindsight one can have, it was definitely the wrong thing to do.

“But at the time I felt it was the honorable and right thing to do.”

Andrew went on to concede it was “not something that was becoming of a member of the royal family”.

“We try and uphold the highest standards and practices and I let the side down, simple as that,” he told Maitlis of the BBC’s Newsnight program.

Over the years Epstein, 66, hobnobbed with politicians, socialites and celebrities, including Donald Trump before he was president, and Bill Clinton.

After his death Giuffre, who says she was abused by Epstein for years and farmed out to his wealthy friends including Andrew, said “the reckoning must not end, it must continue”.

She has alleged she was forced to have sex with the prince 3 times, an allegation he has strongly denied.

“He knows exactly what he’s done and I hope he comes clean about it,” she told reporters after a US hearing on August 27 at which other alleged Epstein victims also described how they were abused.

Giuffre previously testified that she was forced to have sex with Andrew in London in 2001 when she was 17. She said she had sex with him again in New York and on Epstein’s private island in the Caribbean.

But the allegations were struck from the record by a US judge in 2015, who said the “lurid details” were not needed to decide a civil case concerning Epstein.

She has filed a lawsuit in the US accusing Epstein of using her as a “sex slave”.

Buckingham Palace has strenuously denied the claims, calling them “false and without foundation”.

In August, it issued a statement after a video emerged purporting to show Andrew at Epstein’s New York home in 2010 waving goodbye to a woman leaving the property.

“His Royal Highness deplores the exploitation of any human being and the suggestion he would condone, participate in or encourage any such behavior is abhorrent,” the statement said.

Sarah Ferguson, Andrew’s ex-wife and the mother of his two daughters, also defended the embattled royal ahead of Saturday’s interview broadcast.

“Andrew is a true (and) real gentleman and is stoically steadfast to not only his duty but also his kindness,” she wrote on Twitter. – Rappler.com