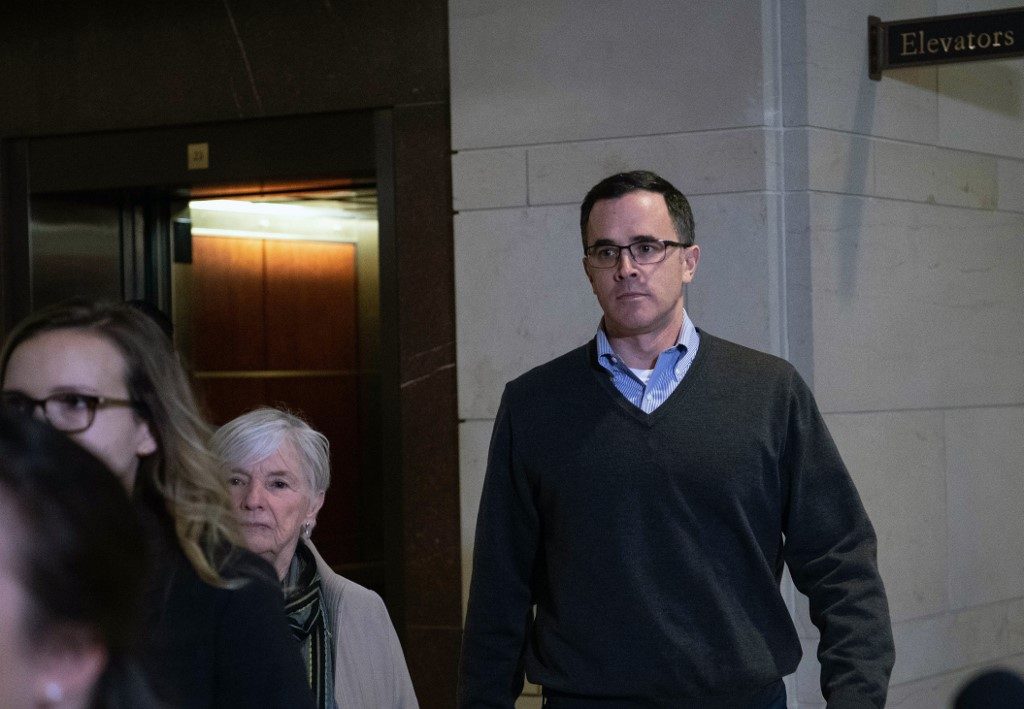 Facebook Twitter Copy URL
Copied
White House's Ukraine expert Timothy Morrison says, however, the summary of the July 25 call had been placed on a highly classified system due to a 'mistake' by White House staff

WASHINGTON DC, USA – A top US official restricted access to the summary of Donald Trump’s Ukraine call that triggered an impeachment probe, fearing it would damage the president, testimony released on Saturday, November 16, showed.

Morrison said in his October 31 deposition that he had asked National Security Council lawyers to review the call because he thought it would be “damaging” if it leaked.

The conversation, which took place on July 25 while the White House was withholding military aid to Ukraine, is central to the House impeachment inquiry into Trump. (READ: Impeachment: The allegations against U.S. President Donald Trump)

Democrats leading the probe say the call summary shows the president abused his office by bullying a vulnerable ally into interfering on his behalf in the 2020 US election.

The investigation threatens to make Trump the third US president to be impeached, although the Republican-controlled Senate would need to convict him to remove him from office.

Morrison said, however, the summary had been placed on a highly classified system due to a “mistake” by White House staff – casting doubt on allegations that it was squirreled away as part of a deliberate cover-up.

He also broke with other witnesses who have spoken out against the call, telling House investigators he heard nothing wrong.

Williams listened in on the July 25 call and said the requests appeared to have been made to further Trump’s “personal political agenda” rather than US foreign policy goals.

“I guess for me it shed some light on possible other motivations behind a security assistance hold,” she added.

The depositions were made public as another official arrived on Capitol Hill to answer questions on the White House’s withholding of nearly $400 million in congressionally allocated military aid for Ukraine.

Mark Sandy was the first staffer from the White House Office of Management and Budget (OMB) to testify, rejecting a Trump administration directive not to cooperate.

Previous witnesses have testified that the money was delayed as part of a wider extortion plot to extract a public announcement from Zelensky that Biden was being investigated.

The White House says Trump delayed the cash because of broad concerns over Ukrainian corruption but Mulvaney undermined this defense when he told reporters in October that there was indeed a “quid pro quo” of aid for investigations.

Sandy told investigators he did not know why the assistance was held up but added that he had never seen such a move during his career at the agency, according to The Washington Post.

Sandy’s deposition caps a blockbuster week on Capitol Hill, in which the House of Representatives staged the first public hearings in the probe.

On Friday Marie Yovanovitch, a 33-year diplomatic veteran ousted by Trump, accused the president’s aides of undermining US foreign policy in Ukraine.

The ambassador testified that she was subjected to a “painful” smear campaign before being abruptly pulled from Kiev.

Trump was accused of witness intimidation, a crime punishable by up to 20 years in federal prison for normal citizens, after he launched an extraordinary real-time Twitter attack during her testimony. (READ: Key moments from Day Two of Trump impeachment hearing)

The public impeachment hearings kicked off Wednesday with testimony by two senior diplomats including the current top envoy to Ukraine, William Taylor.

The gray-haired former Army officer and veteran diplomat testified that he was told by an aide that Trump cared more about the probe than he did about Ukraine. – Rappler.com