Nov 17, 2019 7:35 PM PHT
Agence France-Presse
Facebook Twitter Copy URL
Copied
US Defense Secretary Mark Esper says the decision is 'an act of goodwill to contribute to an environment conducive to diplomacy and the advancement of peace' 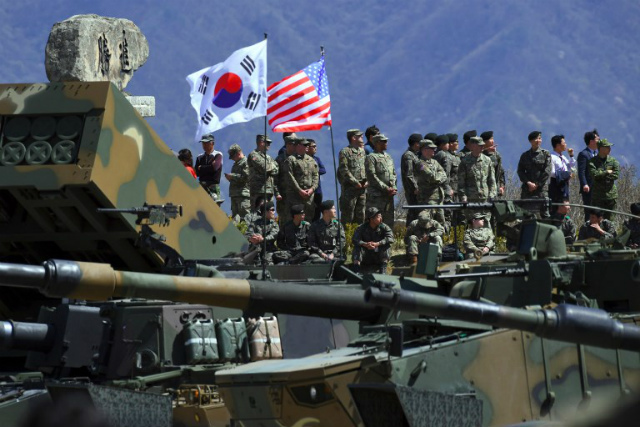 BANGKOK, Thailand – The US and South Korea will postpone joint air drills in an “act of goodwill” towards the nuclear-armed North, US Defense Secretary Mark Esper said Sunday, November 17, after months of deadlocked diplomacy with Pyongyang.

North Korea has long protested joint military drills, which it condemns as preparations for invasion, and has set Washington an end-of-year deadline to come up with a new offer in deadlocked negotiations on its weapons programs.

The US and South Korea last year cancelled several joint drills in the wake of the Singapore summit between President Donald Trump and the North’s leader Kim Jong Un, but are due to carry out a combined air exercise later this month.

But the joint air drills set for later this month will now be postponed, Esper said, days after hinting that the option was on the table.

“We have made this decision as an act of goodwill to contribute to an environment conducive to diplomacy and the advancement of peace,” he told reporters on the sidelines of a meeting of defence ministers in the Thai capital.

He urged Pyongyang to return to negotiations and “demonstrate the same goodwill as it considers decisions on conducting training, exercises and testing.”

Esper said the decision to delay the drills was not a concession but an effort to create “some more space” for diplomats to strike an agreement.

Pyongyang has carried out a series of missile tests in recent months, including one launched at sea which it said was fired from a submarine – a potential strategic game-changer.

It has repeatedly demanded the combined exercise to be scrapped, and recently said holding the drills would be an “undisguised breach” of the Singapore summit declaration.

Negotiations have been stalled since the follow-up Hanoi summit between Kim and Trump broke up in February, with disagreement over sanctions relief and what the North would be willing to give up in return.

Working-level talks restarted in Sweden in October only to break down quickly, with the North blaming the US for not giving up its “old attitude.” – Rappler.com