Nov 18, 2019 11:55 AM PHT
Agence France-Presse
Facebook Twitter Copy URL
Copied
Pope Francis, 82, flies to Asia on November 19, where he will first visit Thailand and then Japan, including the two cities destroyed by devastating US nuclear attacks during the Second World War 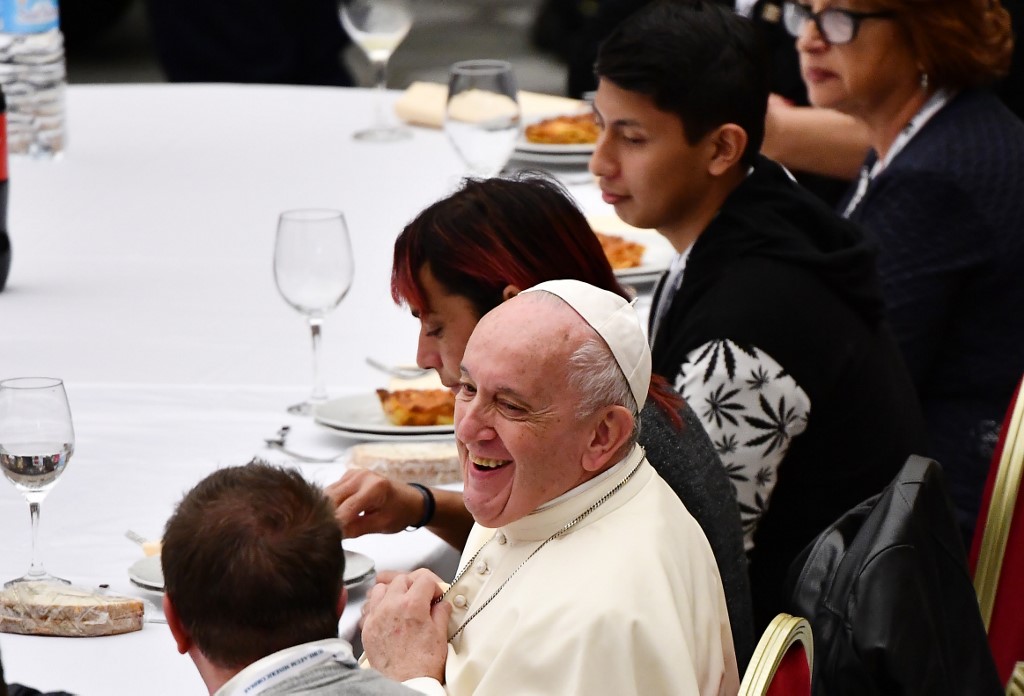 VATICAN CITY, Holy See – Pope Francis, who years ago hoped to be a missionary in Japan, travels to the sites of the world’s only atomic attacks this week seeking a ban on nuclear weapons.

The Argentine pontiff, 82, flies to Asia on Tuesday, November 19, where he will first visit Thailand and then Japan, including the two cities destroyed by devastating US nuclear attacks during the Second World War.

Despite both countries having less than 0.6% Catholic populations, Francis is thirsty for interreligious dialogue with them.

He will arrive in Thailand on Wednesday before flying on to Japan on Saturday, where he will stay until November 26.

Sunday is set to be a marathon day with visits to Nagasaki and Hiroshima, where at least 74,000 people and 140,000 people respectively were killed by the atomic bombs attacks.

The August 6, 1945 bombing of Hiroshima and of Nagasaki three days later contributed to Japan’s surrender and the end of the Second World War on August 15, months after Nazi Germany capitulated.

Father Yoshio Kajiyama, director of the Jesuit social centre in Tokyo, was born in Hiroshima shortly after the war and is eagerly awaiting the pope’s anti-nuclear speech.

“My grandfather died the day of the bomb in Hiroshima, I never knew him. Four days later my aunt died when she was 15 years old,” said the 64-year-old.

“If you grow up in Hiroshima, you can’t forget the bomb.”

The pope will make “as vigorous an appeal as possible in favour of concerted measures to completely eliminate nuclear weapons,” Vatican number two Cardinal Pietro Parolin told the United Nations in September.

“Using atomic energy to wage war is immoral,” the head of the world’s 1.3 billion Catholics told Japanese television in September.

A previous member of Japan’s diplomatic mission to the Vatican, Shigeru Tokuyasu, said he hopes the visit will pull the world back from “the globalisation of indifference” over nuclear weapons.

But, said Tokuyasu, the pope should avoid discussing the politically sensitive issue of nuclear energy.

Francis is also to meet victims of the devastating 2011 earthquake that struck northeastern Japan and the subsequent tsunami that between them killed 18,500 people and sparked the nuclear power catastrophe at Fukushima.

Francis is used to railing against countries that make money from weapons and has already voiced his fear of a nuclear war.

In January last year, he printed cards with a photo of a Nagasaki bomb victim, inscribing the words “the fruit of war” above his signature.

The 1945 photo, captured by American photographer Joe O’Donnell, showed a small boy standing ramrod straight carrying his dead younger brother on his back while waiting for his turn at a cremation site.

The late pope John Paul II visited Japan in 1981, where at Hiroshima’s peace monument he pointed to war as “the work of man”.

In August, the city of Hiroshima called on Japan to sign the UN treaty calling for a ban on nuclear weapons, something that all the world’s nuclear powers have refused to do.

Japan, with its pacifist post-war constitution, adhered in 1967 to the principle of “not producing, possessing or allowing nuclear weapons on its territory,” despite counting on the US nuclear umbrella for protection.

Before arriving in Thailand on Wednesday, the pope praised the “multiethnic nation” which “has worked to promote harmony and peaceful coexistence, not only among its habitants but throughout Southeast Asia.”

In a video message to the Thai people, the pope said he hoped to “strengthen ties of friendship” with Buddhists.

Since Francis’ election six years ago, he has made two trips to Asia, visiting the Philippines and Sri Lanka in 2014, followed by Myanmar and Bangladesh in 2017.

On Thursday in Bangkok, the pontiff is to pay a visit to supreme patriarch Somdej Phra Maha Muneewong at a Buddhist temple. – Rappler.com