Nov 18, 2019 3:07 PM PHT
Agence France-Presse
Facebook Twitter Copy URL
Copied
(UPDATED) All 4 of the dead and the 6 treated for 'non life-threatening' gunshot wounds were men aged between 25 and 35 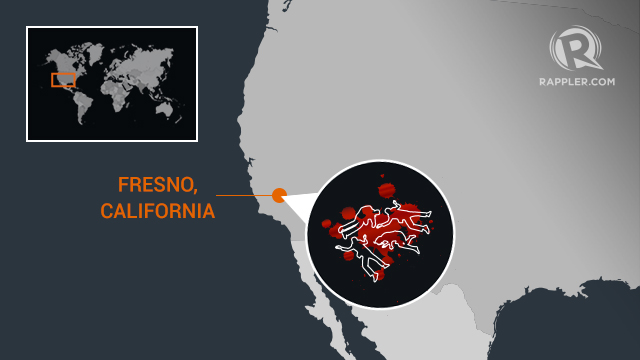 LOS ANGELES, USA (UPDATED) – Four people were shot dead and 6 others wounded while watching a football game in the backyard of a central California home on Sunday, November 17, police said.

Police were called to the scene after at least one person opened fire into a crowd of about 35 people gathered outside the house in Fresno, around 200 miles (320 kilometers) north of Los Angeles.

“Three people died on scene,” Fresno deputy police chief Michael Reed told reporters, adding that a fourth was rushed to hospital in a critical condition and succumbed to his injuries there.

All 4 of the dead and the 6 treated for “non life-threatening” gunshot wounds were men aged between 25 and 35, Reed said.

“Our heart goes out to the families of the victims… this is senseless violence, he added.

“We are doing everything we can to bring the perpetrators to justice.”

Reed said it was unclear how many perpetrators had been involved in the shooting and that there was “no indication” the incident was gang-related.