Nov 19, 2019 7:29 AM PHT
Agence France-Presse
Facebook Twitter Copy URL
Copied
(UPDATED) The stand-off is the most intense and prolonged of Hong Kong's pro-democracy crisis, which has seen millions take to the streets since June to voice anger at China eroding the territory's freedoms 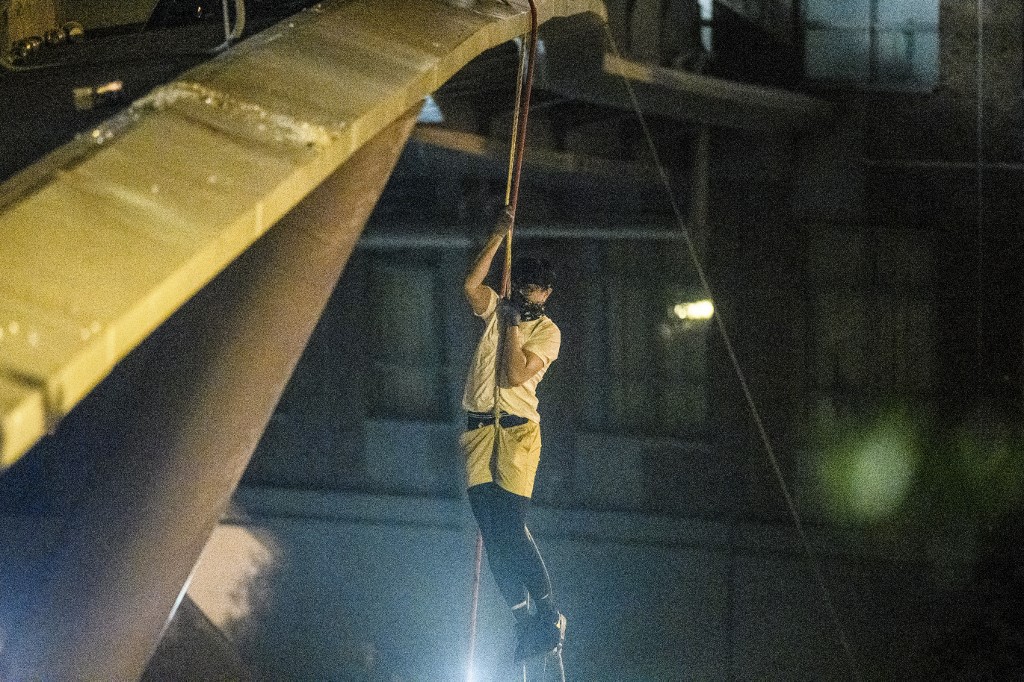 HONG KONG (UPDATED) – Dozens of exhausted pro-democracy protesters barricaded inside a Hong Kong university defied warnings Tuesday, November 19, to surrender, as a police siege of the campus dragged into a third day and China sent fresh signals that its patience with nearly six months of unrest was running out.

High school students were among those holed up inside the battered Hong Kong Polytechnic University (PolyU), fearing arrest or being shot at by police, with many huddled in silver emergency survival blankets to keep themselves warm.

Some protesters escaped overnight by slithering down ropes from a footbridge to a road below, where they were whisked away on motorbikes, while others disappeared into manholes.

In an apparently co-ordinated effort to distract police during the escape operation, tens of thousands of people streamed towards the PolyU campus as clashes simultaneously raged with police in nearby Kowloon district.

The stand-off is the most intense and prolonged of Hong Kong’s pro-democracy crisis, which has seen millions take to the streets since June to voice anger at China eroding the territory’s freedoms.

The move by hundreds of hardcore protesters to take over PolyU at the weekend was also a new tactic.

Previously they had focused on lightning strike protests and acts of vandalism.

The siege at PolyU had seen protesters repelling police surges with a barrage of Molotov cocktails, arrows and bricks. They also set fire to the university entrance on Monday.

After one officer near the campus was shot in the leg by an arrow, which had apparently been fired from one of the university archery kits being used by the protesters, police warned they were prepared to use live rounds.

Footage on Monday showed armoured police beating fallen protesters with batons as they lay on the ground.

One officer was filmed stamping on the head of a man who was already subdued.

Alleged police brutality is one of the central complaints of the protest movement, but senior officers say their officers are acting in accordance with the law.

In her first public comments on the PolyU crisis, Hong Kong chief executive Carrie Lam on Tuesday morning said the remaining protesters must surrender if there was to be a peaceful ending.

“This objective could only be achieved with the full cooperation of the protesters, including of course the rioters that they have to stop violence, give up the weapons and come out peacefully and take the instructions from the police,” Lam told a press conference.

Lam said children who surrendered would not be arrested, though protesters aged over 18 would face charges of rioting.

But, with police custody their best option, some those who remained inside voiced determination to remain.

“Even if we surrender they will still put us to jail. It seems we have two options, but actually we only have one… which is jail,” one of the protesters, a mechanical engineering student who gave his name as Matthew, told AFP inside the campus.

Lam said about 100 people remained inside on Tuesday morning.

With the crisis deepening, China’s ambassador to Britain upped the ante on Monday.

“But if the situation becomes uncontrollable, the central government would certainly not sit on our hands and watch. We have enough resolution and power to end the unrest.”

In another ominous signal, China insisted Tuesday it had sole authority to rule on constitutional matters in Hong Kong.

The warning came as it condemned a decision by the city’s high court on Monday to overturn a ban on face masks worn by pro-democracy protesters.

Only China’s parliament has the right to rule on Hong Kong’s Basic Law — the city’s mini-constitution, Zang Tiewei, a spokesman for the body, said in comments carried by state-run media.

“No other institution has the right to make judgements or decisions,” Zang said, according to a state media report posted on the parliament’s website.

Zang’s comments will deepen concerns that Beijing is chipping away at the autonomy of the financial hub — the fundamental fear driving the popular movement.

A brief appearance by Chinese soldiers on Hong Kong’s streets over the weekend – supposedly to clean up debris – had also fuelled concerns that Beijing could intervene militarily to end the crisis.

Asked Tuesday under what conditions she would ask the PLA’s garrison in Hong Kong for help, Lam said if the city’s authorities could not competently deal with the “rioters” and escalating violence.

“But right now we are still displaying and demonstrating competence to handle the situation ourselves,” Lam said.

Protests started in June as a peaceful condemnation of a now-shelved China extradition bill.

They morphed into a broader movement to defend the city’s unique freedoms, which were meant to be enshrined in the Basic Law when Hong Kong was handed over by Britain in 1997. – Rappler.com

Here are more stories on the latest developments in Hong Kong: