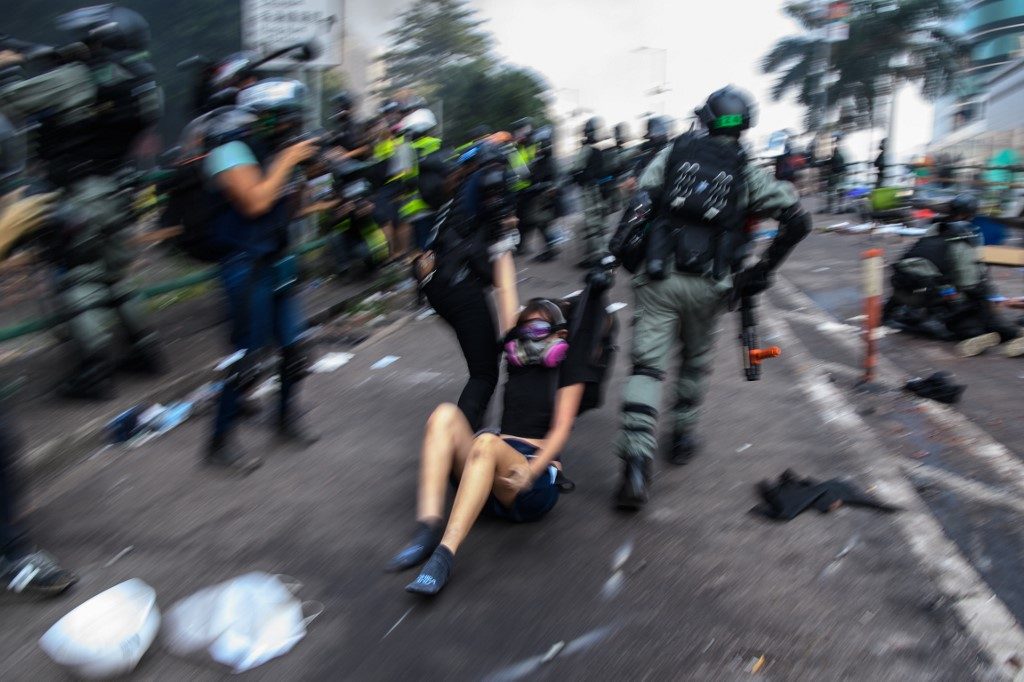 Facebook Twitter Copy URL
Copied
(UPDATED) China shoots back that it would 'have to take strong countermeasures to defend our national sovereignty, security and development interests' if the US carried on making 'wrong decisions'

The lawmakers also approved a measure that would ban the sale of tear gas, rubber bullets and other equipment that have been used by security forces to suppress pro-democracy protests for nearly six months.

China shot back that it would “have to take strong countermeasures to defend our national sovereignty, security and development interests” if the US carried on making “wrong decisions.”

Foreign ministry spokesman Geng Shuang said the US purpose was to “support the extremists and violent elements against China that are trying to mess up Hong Kong… and realise their sinister plot to hinder China’s development by taking advantage of the Hong Kong issue.”

China had also reacted angrily when the US House of Representatives passed a similar measure last month.

The Senate’s Hong Kong Human Rights and Democracy Act would require the US president to annually review the favorable trade status that Washington grants to Hong Kong.

The Senate “sent a clear message to Hong Kongers fighting for their long-cherished freedoms: We hear you, we continue to stand with you and we will not stand idly by as Beijing undermines your autonomy,” Republican Senator Marco Rubio said.

The Senate Foreign Relations Committee’s top Democrat, Robert Menendez, added that the legislation “makes it clear that the US will stand firmly and unambiguously with the legitimate aspirations of the people of Hong Kong.”

The pro-democracy movement was ignited in June when millions took to streets in opposition to a now-abandoned attempt to allow extraditions from Hong Kong to the mainland.

The protests and resulting crackdowns have turned parts of Hong Kong into violent battlegrounds for weeks.

On Tuesday protesters occupying a university defied warnings to surrender, as skirmishes between police and demonstrators continued.

Senator Ben Cardin noted how Hong Kong has enjoyed a special economic status for years, one that relied on authorities “protecting democracy and human rights” in the territory.

“That was the commitment. And if they don’t comply with that, the special status should no longer be available,” Cardin said.

The House and Senate will now harmonize the texts into a single bill to pass Congress and go to President Donald Trump’s desk for his signature. – Rappler.com

Here are more stories about the latest developments in Hong Kong: