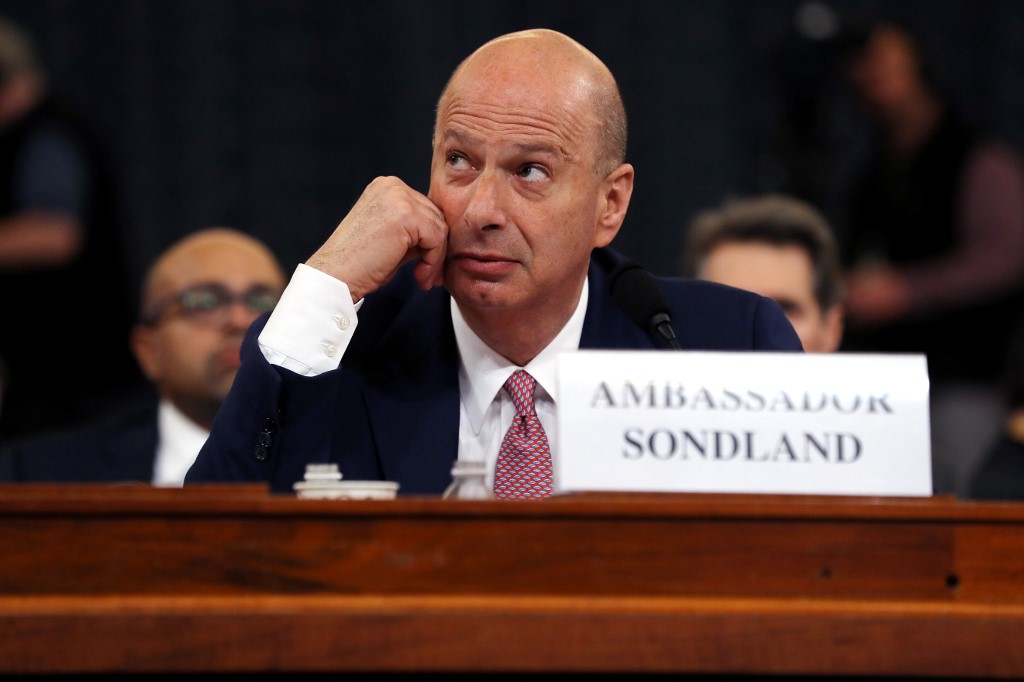 WASHINGTON DC, USA – Washington’s EU Ambassador Gordon Sondland, a key actor in President Donald Trump’s effort to pressure Ukraine for dirt on his political rivals, was in the hot seat Wednesday, November 20, as Democrats built their case for impeaching the US leader.

Here are some of the key quotes from his opening statement.

● “As a presidential appointee, I followed the directions of the president. We worked with (Trump’s personal lawyer Rudy) Giuliani because the president directed us to do so.

“We had no desire to set any conditions on the Ukranians. Indeed, my own personal view – which I shared repeatedly with others – was that the White House meeting and security assistance should have proceeded without pre-conditions of any kind.”

● “Secretary (Rick) Perry, Ambassador (Kurt) Volker and I worked with Mr Rudy Giuliani on Ukraine matters at the express direction of the President of the United States.

“We did not want to work with Mr Giuliani. Simply put, we were playing the hand we were dealt … So we followed the President’s orders.”

● “I know that members of this committee have frequently framed these complicated issues in the form of a simple question: Was there a ‘quid pro quo?’

“As I testified previously, with regard to the requested White House call and White House meeting, the answer is yes.”

● “Mr Giuliani demanded that Ukraine make a public statement announcing the investigations of the 2016 election/DNC server and Burisma.

“Mr Giuliani was expressing the desires of the president of the United States, and we knew that these investigations were important to the president.”

● “In the absence of any credible explanation for the suspension of aid, I later came to believe that the resumption of security aid would not occur until there was a public statement from Ukraine committing to the investigations of the 2016 election and Burisma, as Mr Giuliani had demanded.

“I shared concerns of the potential quid pro quo regarding the security aid with Senator Ron Johnson. And I also shared my concerns with the Ukrainians.”

● “As Ambassador, I have had hundreds of meetings and calls with individuals. But I am not a note taker, or a memo writer … My lawyers and I have made multiple requests to the State Department and the White House for these materials.

“Yet, these materials were not provided to me. They have also refused to share these materials with this committee. These documents are not classified and, in fairness, should have been made available.”

Everyone was in the loop

● “As I communicated to the team, I told President Zelensky in advance that assurances to ‘run a fully transparent investigation’ and ‘turn over every stone’ were necessary in his call with President Trump.”

● “I remember I was at a restaurant in Kiev, and I have no reason to doubt that this conversation included the subject of investigations.

“Again, given Mr Giuliani’s demand that President Zelensky make a public statement about investigations, I knew that the topic of investigations was important to President Trump. We did not discuss any classified information.” – Rappler.com

Here are more stories about the Trump’s impeachment inquiry: